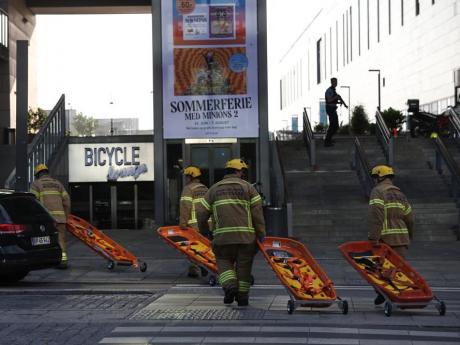 Emergency services at the Field's shopping center after a shooting, in Copenhagen, Denmark, Sunday July 3, 2022. Danish police say several people have been shot at a Copenhagen shopping mall. Copenhagen police said that one person has been arrested in connection with the shooting at the Field’s shopping mall on Sunday. Police tweeted that “several people have been hit” but gave no other details. (Olafur Steinar Gestsson/Ritzau Scanpix via AP)

A 22-year-old Danish man was arrested, Copenhagen police inspector Søren Thomassen told reporters, adding there was no indication that anyone else was involved in the attack, though police were still investigating.

Thomassen said it was too early to speculate on the motive for the shooting, which happened in the late afternoon at Field's, one of the biggest shopping malls in Scandinavia and located on the outskirts of the Danish capital.

When the shots rang out, some people hid in shops while others fled in a panicked stampede, witnesses said.

“It is pure terror. This is awful,” said Hans Christian Stoltz, a 53-year-old IT consultant, who was bringing his daughters to see Harry Styles perform at a concert scheduled for Sunday night near the mall.

“You might wonder how a person can do this to another human being, but it's beyond … beyond anything that's possible.”

He said the suspect was an “ethnic Dane,” a phrase typically used to mean someone is white.