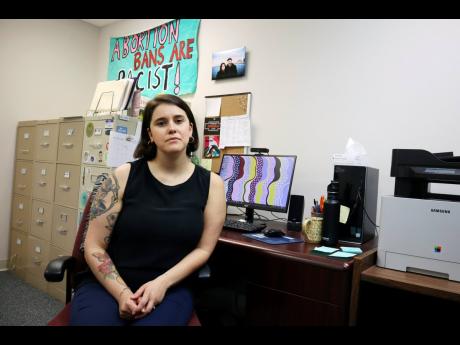 AP
Katie Quiñonez, executive Director of the Women’s Health Center of West Virginia, sits in her office at the clinic in Charleston. 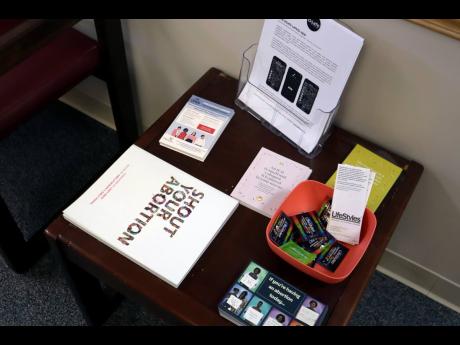 AP
Pamphlets and other resources on abortion care sit on a table in the empty waiting room of the Women’s Health Center of West Virginia. 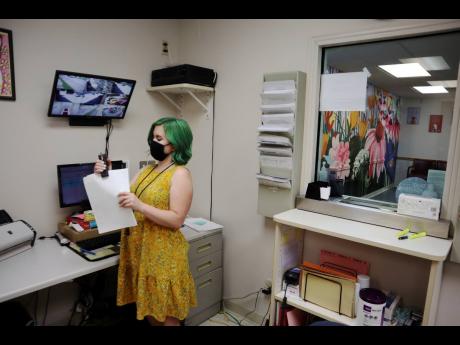 AP
Beth Fiddler, a receptionist and telephone counsellor at the Women’s Health Center of West Virginia, staples paperwork in her office outside the clinic’s empty waiting room.
1
2
3

Danielle Maness has squeezed the hands of hundreds of anxious patients lying on tables in the procedure room, now empty. She’s recorded countless vital signs and delivered scores of snacks to the recovery area, now silent.

Peering into each darkened room at West Virginia’s only abortion clinic, the chief nurse wondered whether she’d ever treat patients here for abortion care again.

“It literally just sickens me, and we don’t know what their futures hold for them,” Maness said of the residents who rely on the Women’s Health Center of West Virginia. “It’s the kind of heartbreak that’s difficult to put into words. There are all these ‘what-ifs’.”

The waiting room should have been filling up with patients on two days last week, when the clinic reserves all slots for abortion appointments. But since the U.S. Supreme Court overturned Roe v. Wade days earlier and ruled that states can ban abortion, the clinic was forced to suspend the procedures because of an 1800s-era state law banning them. The ACLU of West Virginia filed a lawsuit on behalf of the clinic, asking that the law be declared unenforceable so staff can immediately resume abortions. Other states are in various stages of legal limbo.

Nationwide, workers at clinics that shuttered abortion services are feeling fear and stress as they try to pick up the pieces and chart a path forward. At the West Virginia center, the days following the historic court ruling brought on a different kind of grief for staff as their new reality set in, one, Maness said, will linger long after the initial trauma of the decision.

The conversations with frantic patients that first day play on an inescapable loop in her head.

“I don’t think any of us can block it out,” she said. “It’s constantly on our minds.”

Like many clinics that perform abortions, the facility did not offer the procedure daily. Several days of the week are dedicated to routine gynaecological care – cervical exams, cancer screenings – mostly for low-income patients on Medicaid with nowhere else to go. The resolve to continue that work has buoyed employees.

Immediately after the decision’s release, Maness was one of a few staff members tasked with calling patients to cancel abortion appointments. On the other end of the line, she’d never before heard people speak with such fear.

The entire staff found themselves in crisis mode for days, though they and others across the country expected the ruling for months. “You think you’re prepared for the moment, but you’re never really prepared until it’s a reality,” executive director Katie Quiñonez said.

She watched her staff break down and sob. Some called patients or answered phones. Workers who had the day off showed up, some still in pyjamas, to relieve colleagues and offer support. Quiñonez encouraged all to take breaks, often managing the phones herself.

She’ll forever remember that Friday as one of the worst days of her life. Over the weekend, she shut off her phone, lay under a weighted blanket on her couch, ate junk food and watched television. It was the only way she could escape and cope.

When she and her staff returned to work, she held off on filling the vacant slots from cancelled abortion appointments. Some patients still needed other services, but she wanted to let workers catch their breath. She told them to come in late if needed. Clinic rooms remained largely empty, dark and quiet.

But still, the phones rang.

Beth Fiddler sat at her desk behind the clinic’s glass reception window in the waiting room. She had no patients to check in, no Medicaid data to scan into charts, no informative packets to hand out.

Instead, she found herself answering the same questions again and again, referring callers to a hotline or website to help them find the nearest out-of-state abortion provider.

“You guys are going to close up soon, right?” No, the clinic will be open to provide other services.

“Can I get Plan B - the ‘morning after’ pill? What about an IUD, or other birth control?” I’ll help you make an appointment.

“You’re sure I can’t make an abortion appointment? Isn’t there a loophole, an exception?” There are no abortion services at this clinic.

Some callers were in denial. Some remained stoic, others cried. A few responded with hostility, insisting Fiddler was wrong. She tried to be polite, empathetic – but the conversations take a toll.

“It frustrates me,” she said. “I’m already stressed out and upset. I understand wanting to find a way, but there’s no way.”

As one of the first workers patients see, Fiddler takes pride in making people feel welcome and safe. Having to turn them away and simply refer them to a website is gutting, she said.

“As helpless as I feel about it, I can’t imagine how they must be feeling,” she said.

Outside the clinic, it’s quiet, too. There’s no buzz of patients arriving in the parking lot to be escorted by volunteers in pink vests. The only cars belong to staffers and a security guard. Across the street, a lot owned by an anti-abortion organization is vacant except for a large white cross.

A regular protester, a pastor with a “Jesus Loves You” sign, prayed outside a few early mornings, but the usual crowd pleading with patients to reconsider is gone. Some cars slow as they pass. Workers recognize some as protesters’ vehicles, and they imagine the clinic is being watched – to make sure patients aren’t arriving for abortions.

Director Quiñonez said she knows the next steps will be challenging, with a long road for workers to recover from pain.

“Our staff need space and time to process this very traumatic loss,” she said. “And all of the secondary trauma that we’re experiencing from all of the patients.”

Simply being at work is hard, but the employees are dedicated to helping patients.

“Yes, we are tired, we are devastated, we are angry,” Quiñonez said. “But this is far from over. I want to reassure people that regardless of how hopeless and dark it feels right now, this isn’t the end.”