Ukraine lays out $750B ‘recovery plan’ for postwar future 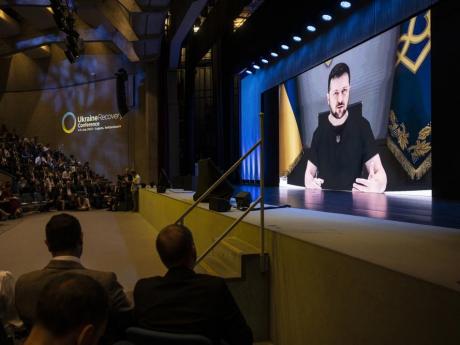 Ukrainian President Volodymyr Zelenskyy delivers a speech by video conference during the Ukraine Recovery Conference URC, Monday, July 4, 2022, in Lugano, Switzerland. The URC is organised to initiate the political process for the recovery of Ukraine after the attack of Russia on its territory. (Alessandro della Valle/Keystone via AP)

LUGANO, Switzerland (AP) — Ukrainian President Volodymyr Zelenskyy said Monday that the reconstruction of his war-battered country is the “common task of the entire democratic world,” as his prime minister laid out a $750 billion recovery plan once the guns of Russia's invaders fall silent one day.

As Russian forces continued their crushing advance in Ukraine's eastern Donbas region, Zelenskyy spoke by video message to the Ukraine Recovery Conference in Switzerland about the needs of the country that has been on an up-and-down march toward democracy since the end of the Cold War and now faces widespread devastation.

“The reconstruction of Ukraine is not a local project, is not a project of one nation, but a common task of the entire democratic world — all countries, all countries who can say they are civilised,” Zelenskyy told hundreds of attendees in Lugano.

British Foreign Secretary Liz Truss said such a recovery would require a sort of “Marshall Plan” for Ukraine to help it rebuild.

Such ambitions, Zelenskyy said, will require wide-scale construction, funding and security “in all of our country which will be forced to continue living beside Russia.”

The task, which is already under way in some areas that were liberated from Russian forces, aims to leverage outside expertise, government funds, and the work of Ukrainians to rebuild hospitals, schools, government buildings, homes and apartments — but also water pipes, gas lines and other battered infrastructure.

“Today, we're all united in our defence. Tomorrow in our reconstruction,” said Ukrainian Prime Minister Denys Shmyhal, who attended in person. He presented a recovery plan that meets immediate needs — even as the war continues — followed by a “fast recovery” when it's over, and then longer-term requirements.