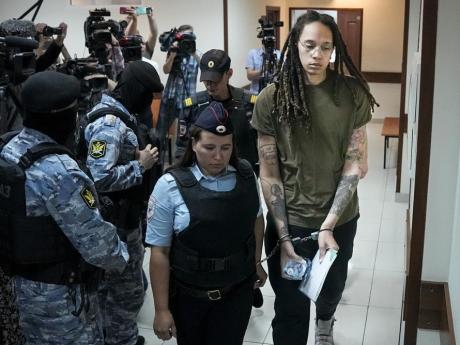 WNBA star and two-time Olympic gold medallist Brittney Griner is escorted into a courtroom prior to a hearing in Khimki just outside Moscow, Russia, Tuesday, August 2, 2022. (AP Photo/Alexander Zemlianichenko, File)

KHIMKI, Russia (AP) — United States basketball star Brittney Griner was convicted Thursday in Russia of drug possession and sentenced to nine years in prison following a politically charged trial that came amid soaring tensions between Moscow and Washington over Ukraine and could lead to a high-stakes prisoner exchange between the two world powers.

The 31-year-old Griner, a two-time US Olympic champion and an eight-time all-star with the WNBA's Phoenix Mercury, listened with a blank expression as an interpreter translated the verdict by Judge Anna Sotnikova.

The judge also imposed a one million rubles (about US$16,700) fine.

US President Joe Biden denounced the verdict and sentence as “unacceptable.”

“I call on Russia to release her immediately so she can be with her wife, loved ones, friends, and teammates,” Biden said, adding that he would continue to work to bring home Griner and Paul Whelan, an American imprisoned in Russia on an espionage conviction.

Earlier in the session, with a conviction all but certain, an emotional Griner made a final appeal to the court for leniency.

She said she had no intention to break the law by bringing vape cartridges with cannabis oil when she flew to Moscow in February to play basketball in the city of Yekaterinburg.

“I want to apologise to my teammates, my club, my fans and the city of (Yekaterinburg) for my mistake that I made and the embarrassment that I brought on them,” Griner said, her voice cracking.

“I want to also apologia to my parents, my siblings, the Phoenix Mercury organization back at home, the amazing women of the WNBA, and my amazing spouse back at home.”

Under Russian law, the 31-year-old Griner faces up to 10 years in prison, but judges have considerable latitude on sentencing.