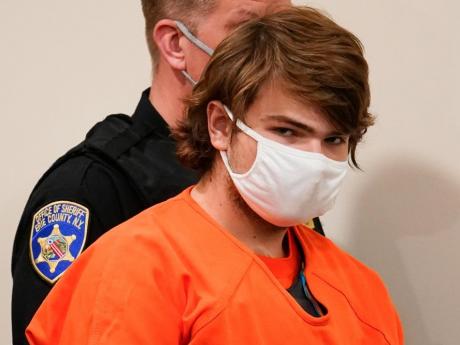 Payton Gendron is led into the courtroom for a hearing at Erie County Court, in Buffalo, New York, Thursday, May 19, 2022. Gendron, who massacred 10 black shoppers and workers at a Buffalo supermarket, has pleaded guilty to murder and hate-motivated terrorism charges. Payton Gendron entered the plea Monday in an Erie County courtroom. The charges carry an automatic sentence of life in prison. (AP Photo/Matt Rourke, File)

BUFFALO, N.Y. (AP) — The white gunman who massacred 10 black shoppers and workers at a Buffalo supermarket pleaded guilty Monday to murder and hate-motivated terrorism charges, guaranteeing he will spend the rest of his life in prison.

Payton Gendron, 19, entered the plea Monday in a courthouse roughly two miles from the grocery store where he used a semiautomatic rifle and body armour to carry out a racist assault he hoped would help preserve white power in the US.

Gendron, who was handcuffed and wore an orange jumpsuit, occasionally licked and clenched his lips as he pleaded guilty to all of the most serious charges in the grand jury indictment, including murder, murder as a hate crime and hate-motivated domestic terrorism, which carries an automatic sentence of life without parole.

He answered “yes” and “guilty” as Judge Susan Eagan referred to each victim by name and asked whether he killed them because of their race.

Gendron also pleaded guilty to wounding three people who survived the May attack.

Many of the relatives of those victims sat and watched, some dabbing their eyes and sniffling.

It didn't address the bigger problem, which they said is racism in America.

Gendron has pleaded not guilty to separate federal hate crime charges that could result in a death sentence if he is convicted. The US Justice Department has not said whether it will seek capital punishment.