One down for New-Year baby 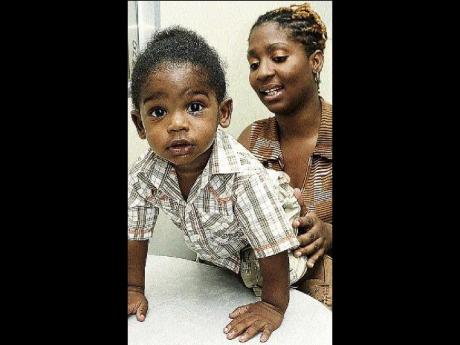 Firsts for D'Jaughn Brown are not unfamiliar, although he is only a year old. These include being the first baby born in the island last year at the Victoria Jubilee Hospital, Kingston, at 12:14 a.m., being the first child for his mother Sandrina Davis and, to top it off, he will be celebrating his first birthday today.

His mother is happy that he has seen his first year and hopes he will continue to complete many firsts in his life.

"It has been fun raising him. He is very curious, smart and he is not a handful unless he is hungry," she said.

D'Jaughn, who visited The Gleaner with his mother this week, was very active yet pleasant. He slapped his small hands on a table, continuously grabbed at a pen and made noises which often sounded like "dawda" and "hawewujah".

His mother laughed when he 'spoke' and launched into one of her many stories, this time about his talking habits.

"Actually, his first word was hallelujah and his second word was dada," she told The Gleaner. His apparent affinity with hallelujah comes with the fact that she takes him to church regularly. Davis, who is a Christian, says spirituality is important in her son's life as she prays with him and for him frequently.

This prayer goes hand in hand with her parenting skills, which she says she has honed by reading material about being a good mother.

Though new to motherhood, she believes she has a hang of what her child should expect and that is loads of love and attention. She says not everything is perfect and her hope is to spend more time with him. That proves difficult as she has to balance work and school. However, in her spare time, she spends time with her son, who she says resembles his father Damian Brown. Davis says his father plays an active role in his son's life, making sure that he is there for him.

Davis believes parents should try to be there for their children, as this will prevent any desire for them to gain attention or love in ill-advised places.

"Because of the decline in values, lots of parents want other people to raise their children. They should take an active role in their lives and become involved. This is to ensure that your children don't take crap. This is why girls will trust boys who tell them anything and that his why boys will trust dons," she said.

To celebrate his first birthday, D'Jaughn will be in church for the exact timing of his birth, 12:14 a.m. After saying his hallelujahs, he will get some cake. Not a bad first.