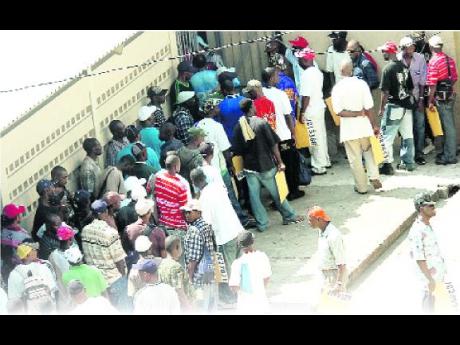 Job seekers gather at the Ministry of Labour in Kingston on April 10, 2008 to be processed for overseas employment.- FILE

With the job prospects at home for Jamaicans looking dim this year, persons are looking overseas for work and it appears that many could find the jobs they seek.

Local overseas employment insiders insist that there are many job opportunities to be had in other countries, mainly the United States and Canada.

Carol Russell-Hylton, a recruitment agent at Beyond Management located in St James, told The Sunday Gleaner that even though the United States is experiencing a rise in its unemployment rate, which was 10 per cent at last check, there are opportunities for Jamaicans to exploit.

"It was not so wonderful for 2009, but I expect it to get better in 2010, there are job opportunities for the taking, people in the US are looking for workers," Russell-Hylton said.

She pointed to the hospitality sector which includes housekeeping, waitressing and bartending as areas where Jamaicans could find work in America.

In the meantime, Novette Morgan of Central Domestic/Elite Immigration located in Kingston says Canada still has many job opportunities for Jamaicans.

"One of the biggest areas in Canada right now is being a live-in caregiver. This is very beneficial because when a person is a caregiver, they can become a permanent resident after two years," Morgan said.

She noted that Canada also has many openings for professionals which Jamaicans could fill.

These include financial managers, restaurant managers and construction managers.

But Morgan warned that before Jamaicans pack their bags and head for Vancouver, Montreal, Ottawa or other Canadian cities, they should ensure that they have the requisite qualifications.

For a job as a live-in caregiver in Canada, a Jamaican needs passes in five Caribbean Secondary Education Certificate subjects, which would be the equivalent of a high school education in Canada.

According to Morgan, persons who get this job would also have the opportunity to attend school and improve their qualifications.

For other skilled jobs such as housekeeping, farming and construction, a recognised certificate in the area such as a 'Red Seal' certification would be an asset.

Canada was a reservoir for Jamaican workers in 2009 and provided many opportunities.

According to the Ministry of Labour, demand for Jamaicans to work in some Canadian programmes doubled last year.

Statistics from the labour ministry show that 2,404 workers left the island between January and August 2009 for the US.

Sixty persons were engaged in the hospitality programme, while 1,841 gained employment on farms.

Another 103 Jamaicans left the island under the J1 Work and Travel summer programme.

The data showed that the highest number of persons to leave in any one month under the Canadian programme was 1,054 in April.

Under the US programmes, the highest departure was recorded in July when 502 persons left Jamaica's shores for a number of American cities.

In the 2007-2008 fiscal year, Jamaican workers earned approximately US$50 million from the American programme and from the Canadian programmes, they earned CDN$60 million. This translated to J$9 billion in one season.