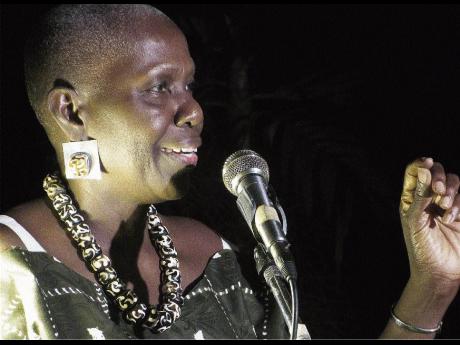 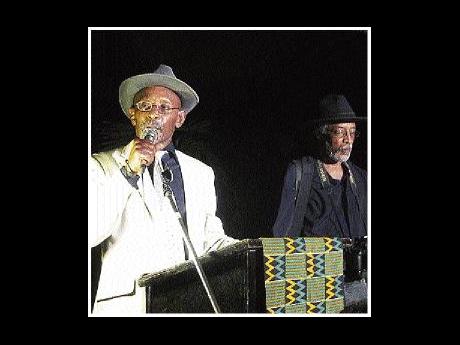 On Sunday evening, University of the West Indies professor, Carolyn Cooper, made a connection between the launch of the Global Reggae Studies Centre and inevitable life changes.

"I hope as I move into my retirement years I will have a profitable enterprise to keep my mind going," she told the large audience at Villa Ronai, Old Stony Hill Road, St Andrew.

Cooper added that she would not be like some of her colleagues, who, upon retirement, wonder what they will do with the 20 or so years before them.

Not much was said about the Global Reggae Studies Centre's specific activities for the rest of the evening, which centred on a lecture (which he termed a talk) by poet Linton Kwesi Johnson on the African consciousness in reggae music.

In the closing stages, though, when the evening turned to poetry, after Robert Graham did his poems about the deportee experience, Cooper said that one of her ventures would be to publish his work, and prove that money can be made from publishing poetry.

Ambassador Dr Nafissatou Diagne of Senegal noted the welcome people of her country have given an African diasporic music born of the triumph of the spirit, while Professor Mervyn Morris spoke to Johnson's connection with reggae. For while, Morris said, "unassuming as he is, LKJ is a poet of huge international distinction". "What is less well known is that Linton has been a student of reggae for several decades."

It was a matter of two distinguished poets working in tandem to present the 'African consciousness in reggae music' as, while Johnson delivered his talk, Mutabaruka played the music as required, Johnson signalling where a particular song should be stopped by raising his hand. But before he began outlining the African consciousness, Johnson remarked about an incident on a radio talk show and the host telling a caller that the Africans she had met did not like Jamaicans, whom they considered to be descendants of slaves.

In addition, Johnson related, the host said she could not say what race she is from, as she is too 'mix up' and also Africans had sold us into slavery.

He also spoke about the 2010 ScotiaBank calendar, which is "beautifully presented" to represent the national motto 'Out of Many One People'. He noted the various nationalities that have been included, remarking that "for some strange reason the Welsh have been left out."

"If I were an outsider who knew nothing of Jamaica, I would not have guessed that the country is over 90 per cent black," Johnson said.

He also read from Andrea Levy's book, The Long Song, which will soon be published, saying that although it is fictional, it provides context to the ScotiaBank calendar and the Perkins Online call. He said that both point to a persistent ambivalence about race in Jamaica which Levy's novel dissects.

He moved on to the lecture itself, noting early titles with African related titles, such as Don Drummond's Addis Ababa, the first song played being Desmond Dekker's Pretty Africa. He worked through numerous songs to Hugh Mundell's Africa Must Be Free By 1983, Tappazukie's MPLA and Marley's Africa Unite.

There were readings from Joan Andrea Hutchinson, who enthralled the audience with memories from her new book, Kin Teet Kibba Heart Bun; Jean Breeze (Reggae Music); Graham and Takura, whose pair of poems about Jamaican food and farming took the house down.

And there was an especially significant poetry moment, as Johnson delivered Robin 'Bongo Jerry' Small's Sooner or Later, Small standing to his left, saying "Bongo Jerry was one of the people who inspired me. Sooner or Later left an indelible mark on my memory."

When Johnson ended the poem with a repeated "dread", Jerry added a final "dread" and concluded, "but mus!"