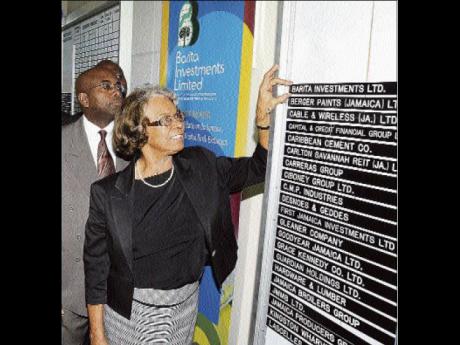 
Barita Investments Limited made its debut on the Jamaica Stock Ex-change (JSE) Thursday, three decades after its founding by Rita Humphries-Lewin.

Each class of prefs was listed at $3.

The listing follows an initial public offering in December that raised $420 million of equity capital for Barita, way short of its $1.1 billion target.

It is the seventh of the 11 broker members of the JSE to list, or whose parent operations are listed.

Humphries-Lewin, who chairs Barita and remains its principal shareholder, was upbeat about her company's prospects in 2010, despite the relatively low take-up of the IPO that was to fund the company's expansion.

Speaking more broadly on the Jamaican economy, Humphries-Lewin, who founded Barita in 1977, offered support for the new Jamaica Debt-Exchange programme.

"We needed the debt exchange badly," she said.

"We know we will have to make some adjustments in the beginning. But, we can't continue to borrow to pay our bills. In the industry, every-body is in support. You recognise that if there is no change we will suffer in the long run."

Lewin said the take-up of the Barita IPO was enough to satisfy stock exchange rules of a minimum 20 per cent public ownership, with 22.5 per cent of ordinary shares 100 per cent of preference shares now held by minority partners.

Humphries-Lewin said the limited take-up of the share offer would not affect the company's plans to expand its unit trust offerings, develop individual retire accounts (IRAs) and trading in foreign securities.

She added that the company had the option of going back to the market, or securing capital by other means.

"Capital is easy to come by," said Humphries-Lewin, adding that the IPO was not so much about raising money for the firm but to gain that 20 per cent equity participation required to list.

The company currently has $11.8 billion in assets and an $849 million capital base.

Barita's capital adequacy ratio now stands at 54 per cent, five-fold the 10 per cent required by the Financial Services Commission, and a capital ratio of 91 per cent, or nearly two times the 50 per cent tier one capital requirement.