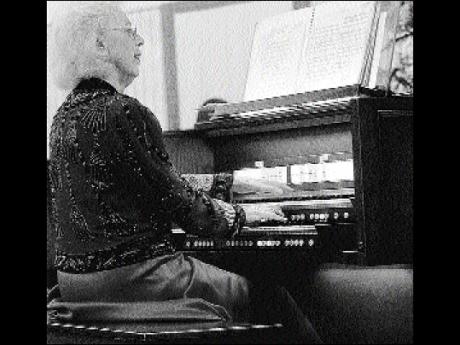 Winston Sill/Freelance Photographer
Diane Bish, a virtuoso of the organ, in concert at the Stella Maris Church last Sunday.

An excellent performance by organist Diane Bish at the Stella Maris Church on Sunday could only have cemented her reputation as "the most visible and influential classical organist performing today".

But the enthusiastic applause she received from the fair-sized audience was evoked by more than her music. The audience was also responding to her informative and humorous patter as Bish showed herself to be not only an organist, but also an entertainer.

The success of her programme began with its planning. All 12 of its pieces were lively but nevertheless had sufficient variety in their compositional styles to keep the audience alert and interested.

Bish's repertoire for the evening began and ended, formally, with toccatas. A toccata is "a virtuoso composition for keyboard or plucked-string instrument featuring sections of brilliant passage work."

The opening item was Toccata on Christ the Lord, an original composition by Bish. The final item on the printed programme was C.M. Widor's Toccata from Symphony V. The actual final piece - which was as upbeat as the rest - was played as 'brawta', at the request of the audience and Vivian Crawford, executive chairman and treasurer of the Ward Theatre Foundation, the organiser of the concert.

In greeting the audience, Bish expressed delight at being back in Jamaica to share music on "the king of instruments". In jest, she justified that description of the organ by saying that it takes up more space than any other musical instrument. Additionally, she said, it is the most versatile.

Bish demonstrated that versatility throughout the recital but it was especially evident in the second item, Joseph Haydn's Five Flute Clocks, which Bish played entirely on the organ's flute clocks. Their sound, as the name suggests, is flute-like.

Bish's third selection was yet another toccata, this one by the most famous organist of his time, J.S. Bach. The audience heard that the piece, Toccata in F Major, was tremendously difficult as the composer first put the melody in the right hand, then the left, then the feet and, finally, had two melodies going simultaneously.

Of course, Bish's execution of the complex work, involving all the organ's four family of sounds, was superb. It was fascinating watching her feet, clad in rhinestone-studded shoes, flashing over the pedals. One's attention was directed to Bish's feet because, earlier, she had quipped, "The more rhinestones you have on your shoes, the faster your feet go."

Bish jumped hundreds of years from Bach (born 1685) to the next composer, an American, Gordon Young. But his work, Jubilation Suite, was also complex, having as its movements Trumpet Tune, Aria, Album Leaf and Jubilation. Those names indicate the variety of the piece's moods.

Other composers featured in the recital were Louis Vierne (with Carillon de Westminster) and Theodore Dubois (Fiat lux). Bish also entertained with her own work, Dance of the Trumpets, a rhythm-filled piece which had members of the audience nodding their heads in time.

A particularly well-received item was Bish's arrangement of three well-known hymns, Come Thou Fount, Amazing Grace and There's a New Name Written Down in Glory. The first got a jazzy interpretation, the second was poignant and the third was jubilant, with a definite barn-dance tone to it.

Not surprisingly, Bish chose as her final (listed) piece a composition which, she said, "calls on all the resources of both the organ and the organist". The Widor toccata certainly has complexity, power and pleasing melodies.

It also ended with a crescendo that pulled the audience to their feet in a well-deserved standing ovation for Bish. Minutes later, the organist was personally congratulated by Lady Allen who, with her husband, the governor general, was a patron of the function.

Restoration of the ward

It was organised as a fund-raising event and, according to the printed programme, the proceeds would go toward the "full restoration and grand reopening of the Ward Theatre on its 100th birthday in December 2012." Also from the booklet, in a message by Foundation Chairman Ruby Martin, one can read the tragic tale of the near-derelict theatre.

"Despite its rich and colourful history and the fact that it is one of our national treasures, the theatre has been closed since August 2007, when it was severely damaged by Hurricane Dean and prolonged rainfall thereafter. Without a significant injection of funds to rescue it, the Ward faces a future of permanent closure and lying in ruins."

The estimate is that refurbishing of the theatre will cost US$20 million. There has been much debate in the theatre community and elsewhere about whether spending that sort of money on the Ward makes sense.

Still, the theatre's Centennial Celebration Committee is currently planning the marketing of "a series of events, both domestically and throughout the major diaspora cities, designed to grow awareness of the Ward Theatre's significance in Jamaica's rich cultural history." The aim is to obtain funds and other support for the Ward Theatre.