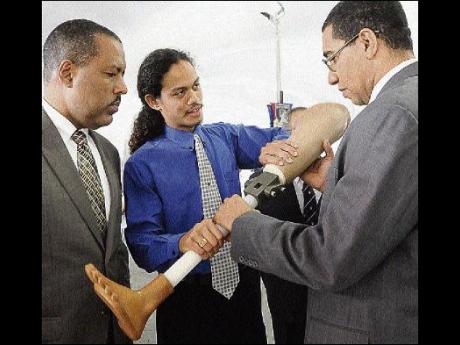 From left: Professor Gordon Shirley, pro vice-chancellor and principal, UWI,Mona, looks on as Joel Sadler, inventor of the Jaipur Knee that was rated at number 18 on the Time Magazine 50 best inventions of 2009, shows Andrew Holness, minister of education, how the knee works, at the official opening of UWI Research Day 2010, last Thursday. - Ricardo Makyn/Staff Photographer

Although only 25 years old, Joel Sadler has pioneered a major development recognised by TIME magazine as being among its 50 best inventions of 2009.

Sadler, a lecturer in mechanical engineering at Stanford University in California, developed an artificial knee that is being used to help hundreds of amputees in India to walk again.

Known as the JaipurKnee, the device costs only US$20 (J$1,790) and was developed by Stanford University in collaboration with the Jaipur Foot Group, a charity that provides prostheses to Indian amputees.

High-end titanium knee joints, particularly those made in the United States, can cost anywhere from US$10,000 upwards.

Sadler, who developed the device along with American teammate Eric Thorsell, displayed the artificial knee to an extremely receptive audience during a presentation at the University of the West Indies Mona campus' research day last week.

The former Wolmers' Preparatory student, who attended Campion College prior to pursuing an engineering degree at Massachusetts Institute of Technology, told The Gleaner he was encouraged by the reception he received in Jamaica for his invention.

He said that at no time did he imagine that the story surrounding his invention would have spread so far.

It all started as a class project in January, 2008 when he and Thorsell were doing a course in biomedical device design as part of their masters degree programme.

"We chose to work on a prosthesis. We didn't know what we were going to work on at the time, but we knew somebody needed something, " said Sadler of the project that would later evolve into the JaipurKnee.

It was only when both young men went to India, for the first time to observe amputees in clinics being fitted with artificial limbs, that they began to understand what was needed.

It was there Sadler and Thorsell met 17-year-old Kamal, an amputee with whom they would work closely to improve the device over the next two years.

"He needed something that would enable him to function in his community, to earn money, walk around, look normal and feel normal. That was what really drove home the need to us," said Thorsell.

A rough prototype knee had been developed and taken to India for testing. Early prototypes were developed from paper and underwent testing during the two years it took from design to implementation.

Sadler said the device went through various testing cycles in the lab, mimicking real world environmental conditions in which the prosthesis would be used.

However, the project was not without its challenges.

Thorsell acknowledged the team had to contend with cultural and language differences, adding that at times it posed difficulty obtaining feedback vital for the prosthesis' design and construction.

"People were so grateful just to have anything that it was hard for them to say anything that could be construed as negative criticism. But that's what we really needed as designers."

Sadler would visit India twice, including during his summer vacation, as he fine-tuned designs for the prosthetic limb.

Sadler says the device has been fitted on over 600 persons, and is built to last for a minimum of three years with 'normal' use.

He says although the prosthesis continues to undergo trials in India, other countries such as the Phillippines, Bolivia, Cameroon and Vietnam have expressed interest in the device.

The team is already working on the next version of the Jaipur Knee. However, Sadler did not disclose details as to when the new version would be available.

"Our intention is to make this technology available to everyone who needs it, " said Sadler.

"We're looking at other developing countries where there are people who may not be able to afford prostheses, and even in the developed world, in places like the US where some people can't pay for prostheses."

"I definitely see there's a great potential for an affordable prosthesis for people not just in Jamaica, but worldwide. I have been talking with orthopaedic surgeon Dr Rory Dixon at the Mona Rehab and I am confident we'll eventually see the technology evaluated, eventually, in a setting like Jamaica."

Sadler also encouraged young Jamaicans to seek out paths for exploration and creating innovations that mattered.

"It's within everyone's reach and that encouragement, the creative confidence, is what's going to really take Jamaica out of any complex problems that we have right now," he said.