Air Jamaica on a wing and a prayer 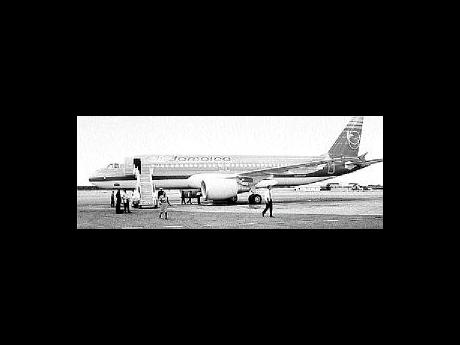 Sorry, but I won't be joining any campaign to place Air Jamaica in the hands of its former workers. It's a sentimental notion but it's quite impractical. The experiment to ensure Air Jamaica remains in local hands has already failed. The Air Jamaica Acquisition Group, comprising deep-pocket businessmen Butch Stewart and the Moo Youngs, rebranded Air Jamaica and sharpened its image but it continued to post hefty losses. it was eventually handed back to Government, which meant piling yet more misery on the burdened taxpayer.

We continue to trumpet Air Jamaica's safety record - those smooth, gentle touchdowns certainly enhance the flying experience. However, despite the enormous national pride and goodwill we feel for Air Jamaica, it has continued to struggle over these many years. Observers seeking to offer explanation for Air Jamaica's poor performance suggest that the carrier's financial difficulties were exacerbated by inefficient management, abuse by airline staff and government officials as well as a reluctance to make necessary cost-effective adjustments, including shutting down unprofitable routes and trimming staff. One may add the selfish actions of those who have used the airline to transport drugs, thereby incurring crippling penalties. Many at home and in the diaspora hypocritically profess their love for Air Jamaica; but, when they make their travel arrangements, invariably they spurn the "little piece of Jamaica that flies."

Truth is the airline industry is not generally celebrated for its profitability. Staggering figures recently released by the aviation industry help to put into perspective what has been happening since the September 2001 terrorist attack. Last year, airline revenues declined by US$80 billion and the industry lost a colossal US$11 billion.

Added to this grim economic performance is the spectacular rate of failure as costs soar and passenger numbers tumble. Since 2001, more than 100 carriers have folded. On this list is the oldest name in aviation history, Trans World Airline (TWA), and established names such as Sabena, Swissair, and Aloha that have all been hit by turbulence. It is in this cauldron that the Air Jamaica pilots wish to swim.

A spike in jet fuel is all it takes to ground an airline. But fuel costs rank second to the hefty wage bill which airlines face. We won't consider a crash because the repercussions are enough to make one dizzy. History is replete with examples of airline staff offering to take pay cuts or freeze benefits in order to safeguard their jobs, because they recognise that this is a tough business.

There are piles of stories about the abuse of the airline by Air Jamaica employees who have set up neat businesses including selling wares to the very airline and the denial of seats to full revenue-paying passengers in order to satisfy the whims of family members and their "buddies".

Sure, Jamaica will lose some prestige when Air Jamaica is sold. But the current economic crisis has only made the debt-laden airline that much heavier. We need level-headed thinking. It is time to ignore the emotional dribble. It seems that the government must now hive off the profitable parts of Air Jamaica that are left after the Heathrow sale, to another carrier that has the wherewithal to secure emergency funding and Federal Aviation Administration air carrier operating certificate and run the airline. The pilots and workers have not demonstrated that they have the financial ability to run the airline, and one fears that, with the first sign of trouble, they will be looking to government for a lifeline to keep the airline flying and save their jobs.

An airline can play a strategic role in a country's development by supporting tourism, promoting investment and trade. However, we see many countries that are doing far better than managing without a national airline.