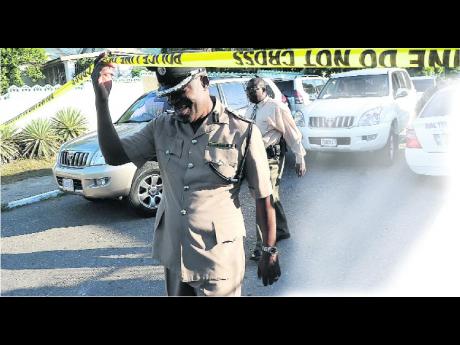 The Jamaica Constabulary Force (JCF) was rocked to its core yesterday as a large quantity of guns and thousands of rounds of ammunition found in the hands of criminals were traced back to the police armoury.

Acting Police Commissioner Owen Ellington, who was on the scene early in the morning, immediately admitted the possible involvement of members of the JCF in the crime.

He said a police sergeant was among eight persons - four men and four women - arrested in the immediate aftermath of the massive seizure.

"As of now, the police armoury and police stores are considered crime scenes," Ellington told reporters on the scene.

"I am taking this action because of the possible involvement of police personnel in the unlawful removal and possible sale of the weapons seized this morning to criminal elements."

He added: "All staff members, police and civilians, of the armoury and stores will be interviewed and polygraphed by a team from the Anti-Corruption Branch. In addition, a complete administrative and security audit will be immediately done on both the police armoury and stores."

Ellington said the audit was to be done by the police inspectorate. The armoury has been shut down.

According to the official police report, a team from the east Kingston division was on patrol on Mountain View Avenue in eastern St Andrew when they saw persons acting suspiciously on Munster Road.

A further 600 rounds of ammunition were found at a business place on Mountain View Avenue believed to be occupied by the owner of the premises on Munster Road.

Acting on information from that operation, the police carried out a number of coordinated operations in the St Andrew South and St Andrew North divisions which resulted in the seizure of another firearm and approximately 300 more rounds of ammunition.

However, even as the police reported the seizure of 19 guns, Gleaner sources were claiming that many more had been recovered.

According to one source, the number of guns confiscated by the police was closer to 40.

"The bag dem tek out of the policeman's car had 18 guns, including four or five M16 rifles," the source said.

"Then more guns were found inna the yard (Munster Road) and the police come out with another bag," the source said.

But late yesterday, a senior police officer insisted that only eight guns were found in the police sergeant's car and 10 inside a vehicle on Munster Road.

Ellington was quick to praise the patrol team which made the initial discovery.

"While I am extremely concerned with the events of this morning and the possible implications on the police force, I am heartened and extremely proud of police personnel who responded quickly and without fear or favour in finding the guns and ammunition and arresting one of their own who might be unlawfully implicated," Ellington said as he acknowledged that the force had received another black eye.

"I commend these officers who represent the good within the JCF," he added.

That commendation was shared by National Security Minister Dwight Nelson, who was travelling to his first crime scene since being appointed to the portfolio.

However, Nelson noted the serious implications of the involvement of police personnel in the illegal gun trade.

"I am really frightened by the implication of this find and what it adds to the difficulty that the police have in fighting crime and violence in Jamaica," Nelson said.

Only recently, the police seized an illegal firearm which, when tested, contained bullets believed to be issued at the Jamaica Police Academy in St Catherine.