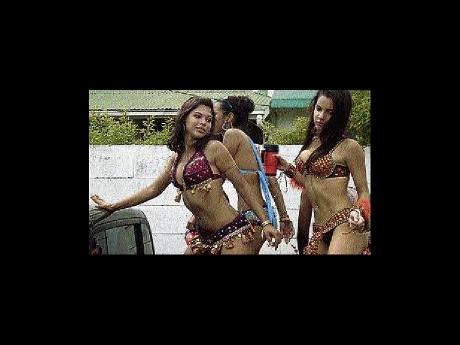 Revellers wining in a van back at Trinidad Carnival last Monday. 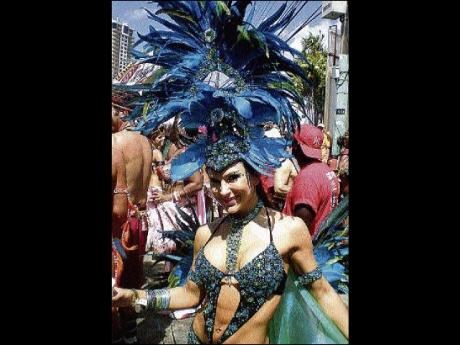 This reveller shows off her turquoise costume. - Photos by Emma Sharp
1
2

The most anticipated event each year in Trinidad and Tobago is its road march (also known as Pretty Mas), which takes place on Carnival Monday and Tuesday. This year it fell on February 15 and 16.

Trinidadians from all over the twin-island republic, and the world, start preparing for these two days months beforehand. They go on a diet, they run around the Queen's Park Savannah daily and they work out in gyms at every opportunity - all in preparation for looking the best they possibly can in the skimpiest of costumes, while parading along the streets of the capital city. For 'Trinis', this is not a one-time experience to be ticked off their bucket list. This is a yearly ritual which occurs on days that are not official public holidays, but are taken as such by nearly everyone. If you love carnival, you participate in some way. If you hate it, you get out of town.

Each year is deemed by some to be "the best year ever" and by others to be "not as good as last year", but according to most, it is always fun. Having previously played 'mas' only once, I did not have much to compare it to. That being said, within three years, the numbers appear to have grown. Like J'Ouvert, there are several bands, and a Trini tends to remain loyal to the one he or she has played with before. Tribe, Legends, Island People, MacFarlane Carnival and Harts are among the popular ones, the latter of which celebrated its 50th anniversary this year. I decided to play 'mas' with this particular band, which is now being run by the third generation of the Hart family.

Due to this celebration's running over two days, masqueraders only wear pieces of their costumes on Carnival Monday. It's considered more the party day.

On the Tuesday, however, women are decked out in complete beaded, feathered and clothed (or bikinied) glory, while the men wear complimenting costumes. Bands are judged as they cross the stage, which is a big deal for designers and band leaders. Brian MacFarlane took home the 2010 Large Band of the Year title for his 'Resurrection of the Mas' theme for the fourth consecutive year. If he wins in 2011, he'll make history.

For the organisers of Harts, it's less about the competition and more about the fete. This year we set off at 10:30 on Monday morning and 6:30 on Tuesday (okay, I'll admit that I did not make it to the start of either!). Both days ended after nightfall. Like Bacchanal Carnival in Jamaica, music trucks travel down the streets while participants follow dancing and palancing. What is different about Harts, though, are the drinks carts, which are privately owned.

They get pushed along by hired hands and facilitate the convenience of helping yourself to a beverage whenever you like, without having to wait. Individuals pay a set price and are provided with liquor, lunch, and other refreshments for the two days. My cart (well, not really mine) was full of Jamaicans (and Trinidadians living in Jamaica), most of whom make the journey to Trinidad annually to play mas. With revellers ranging from late teens to fifty-somethings, palancing down de road did not surpass any of us, who felt like Trinis to every single bone!