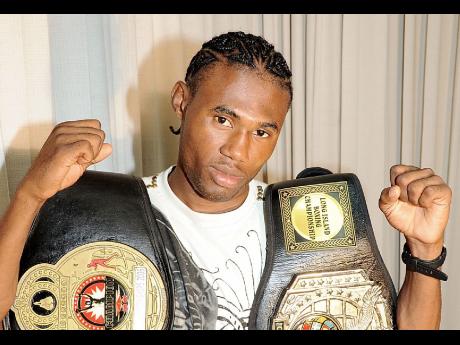 Nicholas 'Axeman' Walters has become the latest Jamaican boxer to enter the world rankings after he was installed as the number 12 contender by the World Boxing Association (WBA), coming on the back of his regional FedeLatin featherweight boxing title on December 18.

The former Caribbean amateur star won his first professional title on a unanimous decision over Carlos Manuel Reyes of the Dominican Republic in Haiti.

The 23-year-old Walters hails from Roehampton, Montego Bay, and got started in boxing at age seven. His record currently stands at 13 wins and no losses, with 10 knockouts.

While attending Anchovy High School, Walters was deputy head boy, champion boy for three consecutive years, captain of the cricket team and a member of the Science Quiz team, which won at both the junior and senior levels. He now resides in Panama but proudly represents Jamaica.

QUESTION: What is the 'Axeman' currently up to as it relates to boxing?

NW:
I am practically just working towards a fight in March although it is not certain as yet, but there is a card in Panama in March and I think I am going to be on that card, involved in an eight-rounder. Every day it is just working out, training, that's basically it just now, just working on new combinations and new movements. I am ranked number 12 in the world just now so the training has stepped up a bit; the coach is pushing me a bit more.

Q: How did you get started in boxing, and why did you decide to choose it as a career?

NW:
My father, 'Smoking' Joe Walters, was a professional boxer so at a very tender age, around seven, I watched him training and skipping; it was actually the skipping that got me into boxing. The way that he handled himself with the skipping rope, I was like 'wow, I need to catch some of those styles', so I started practising with the skipping rope, and when he was finished training he started putting the gloves on to my hands, and it was there that we started working out.

I have another brother who is the same age as me, and he started putting on little shows with us on the street. So that is how I got started. My father was a boxer and I got hooked to the sport because of his skipping. So when I stepped up and became professional, it was just natural. I was Caribbean champion for two years; I have taken part in all the major competitions in boxing. So everybody knew I was going to go into the professional world sooner or later.

Q: So far, what has been the highlight of your career?

NW:
Most people would say winning the title is the major achievement for me. Yes, it is, but my best moment within boxing was my second-to-last fight. I fought a Colombian guy who had a lot of experience. When I went into the fight I broke my hand in the third round. I said it to my coach but he didn't understand me at the time because the pain was so intense I started talking to him in Jamaican patois.

I had another coach in my corner who spoke Jamaican patois, so he understood what I said and he relayed this to my coach. The coach then said to me, 'Nicholas, you win four rounds already and you won one round with the broken hand, so why don't you just go out there and do the same thing you did in the fourth round?' He then told me to do the same thing in the fifth round. Eventually, I knocked the guy out in the sixth round. In my career that has been the best moment for me, winning a fight with one hand, fight three rounds with one hand and knocking the guy out.

Q: What has been the worst experience for you so far in your career?

NW:
The worst was not being able to get to the Olympic Games, because every sportsman's dream is to go to the Olympics. I went to Chicago and fought this guy from Sweden to qualify for the Olympics. I was leading him on points for the first two rounds and then the judges stopped scoring for me and kept scoring for the guy, and the guy was doing nothing but holding on for his life and he ended up winning the fight, but that is in the past.

Q: Why have you changed your base from Jamaica and settled in Panama?

NW:
Boxing in Jamaica is not as active as in Panama. Almost every month there is a fight in Panama. In Jamaica, it has been a while since we have had a good professional card, and just now I am trying to see if I can rebuild Jamaican boxing because there are so many world champions who have come out of Jamaica. So I went to Panama to learn and to fight, because if you want to take on the world you have to go where boxing is active.

Q: How have you found living in Panama, and how hard was it to adjust?

NW:
The first four months for me in Panama were extremely rough because I had to make new friends. I knew nothing about Spanish; I didn't even know that in Panama they spoke Spanish. So when I went to Panama I had to change my life, speak differently, learn a new culture, eat differently and make new friends. Now it is much easier, I have a lot of friends, I am speaking Spanish fluently, I have got accustomed to everything, so just now everybody is saying I am no longer just Jamaican, I am Panamanian as well.

Q: Where would you like to see boxing reach in Jamaica?

NW:
I can't do it alone but I am really trying to get the love back for boxing. Back in the day when fights were going on everybody was aware of it. It would be nice if we can have at least four professional cards each year in Jamaica.

Q: Which has been your toughest fight to date?

NW:
My last fight was my toughest to date because this guy went 11 rounds with me, he stood up and he gave me a good fight. (That fight was against Carlos Manuel Reyes for the WBA FedeLatin belt).

Q: What would be your dream fight?

NW:
My dream fight would be fighting for a world title, whoever the opponent is.

Q: What is a typical day in your life like?

NW:
A typical day in the life of the 'Axeman' is waking up at four, then I go out to jog for an hour and then I come in and do some exercise. I then hit the shower, check my weight, go back and have a little rest and wake up and get ready to go to the gym. I go there at 11:30 a.m. and go up to 3:00 p.m. and then go back home and get some rest. Then I resume training at 5:30 p.m., and when I am finished I take it easy and start it all over again the following day.