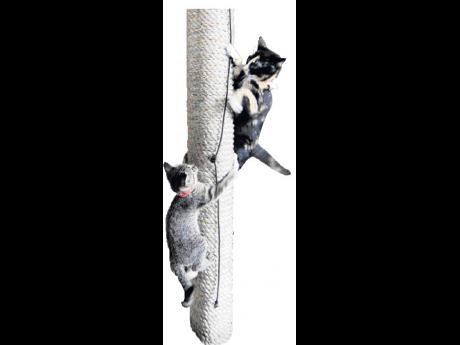 A pair of kittens play on a scratching post at the JSPCA. 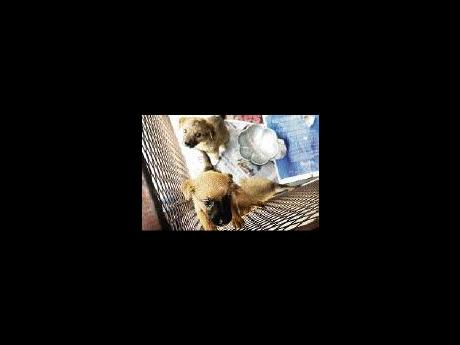 Puppies await adoption at the JSPCA.
1
2

Jamaicans give hope to four-legged friends

THE 10th most powerful Atlantic hurricane walloped Jamaica in 2004, causing problems for many, including a white and black cat, which was left with the task of finding food and a home.

The cat spent a weekend wandering, having been displaced by Hurricane Ivan. Persons asked, "Who does this cat belong to?" No one knew.

He latched on to Wanda Hendriks, who fed him, and according to her, she "couldn't get rid of him". She fed him in the days and put him out at nights. After hanging around for a month, she named him, serendipitously, Ivan.

Hendriks says caring for Ivan consumes her time. Ivan is a happy cat and has fit in so well within the past six years, he even has a common-law wife, Ms Macky.

"You should see the wife. She is half his size and she rules him," she said. "He is an older man, but she is the young spriteful thing."

Goats are pets too

Tammy Browne of the Montego Bay Animal Haven had her story too. However, it isn't about the conventional cat or dog.

"The goat was a tiny, tiny little thing," she said. "I drove to Middle Quarters for peppered shrimp and on our way back, it was dusk. Something rolled off the hillside in front of my car, and it was the goat."

Browne said she made a bleating sound to attract some four-legged attention, but no other goats were around. The owner told her the mother goat died and the kid was left to fend for itself.

"We named him Storm because it was a stormy day. I was so worried he was going to wind up in a soup or something."

Instead of playing the starring role in mannish water or curried goat, Storm was taken to a paddock at the haven, which held 18 dogs, and survived.

The Montego Bay Animal Haven helps abandoned and starving animals. It is also responsible for hosting a team of American veterinary doctors who took part in a subsidised spay and neuter programme last year. According to Browne, this programme should continue.

Dr Paul Turner, senior veterinary surgeon at The Jamaica Society for the Prevention of Cruelty to Animals, advises persons to make sure their budgets can accommodate the pet additions to their families.

Caring for dogs and cats

1 Dogs and cats, like humans, need balanced diets with great nutritional value. Turner recommends using puppy chow for puppies and dog chow for dogs. Up to nine months, puppies should be fed two to three times a day. After that, one meal a day will suffice.

The best time to be fed is in the morning. This will ensure dogs are alert at night. Also, take care not to feed dogs cornmeal with too many additives as this can lead to skin allergies. Cracked rice is cheaper and better for digestion. However, buying kibble is more affordable than making food.

2The first three months of a puppy's or kitten's life is crucial, as they will determine the overall health of the animal. During the first three weeks in the life of a pet, the puppy or kitten should be dewormed. Six weeks in, puppies should be vaccinated against parvovirus. Six months in, puppies should be taken in for heartworm prevention. Spanish Town and Portmore are known for high incidence of heartworm.

3Grooming is important for keeping away ticks and fleas. A dog with a low coat (compared to those with shaggy ones) can be bathed once a month with special shampoo before applying antiparasite medicine.

4Owners who socialise with their pets usually have happier animals.

Socialising will also help in analysing behavioural changes and picking up on when something is wrong with the environment or if the animal is ill.

5Before becoming a pet owner, consider the affordability factor. If grooming isn't in the budget, get a short-haired pet.

Give the dog lamp oil and it will get better: This may remove the clinical systems, but it does not treat the ailment.

Doc, the dog swallowed his teeth: Swallowing its own teeth will not affect the dog and is not the reason for its sickness.

Burnt engine oil will cure mange: Not true. It burns the skin, forcing the skin to regrow, healing itself. Putting engine oil on the dog can also be painful.

Mongrel nuh get sick: Not true. If they are exposed to diseases, they can get sick too. They also need regular health care like other dogs.