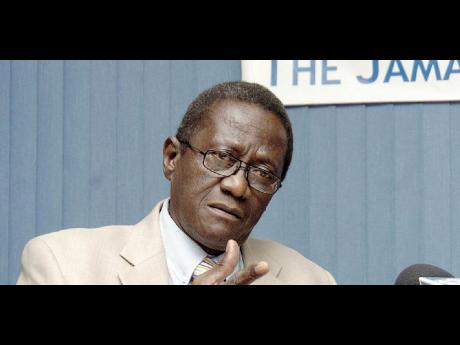 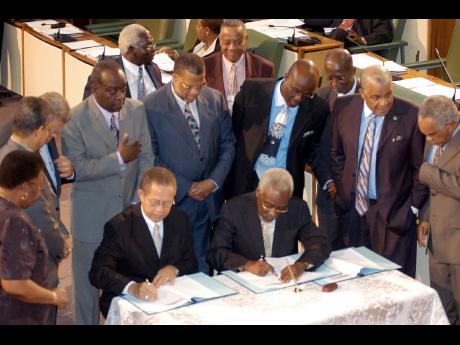 Prime Minister P.J. Patterson (seated right) and Bruce Golding (seated left), leader of the opposition, sign the revised Agreement and Declaration on Political Conduct in the House of Representatives on September 20, 2005. Looking on are other members of parliament (MP). The revised code mandates all MPs to disassociate themselves from criminals. - Ricardo Makyn/Staff Photographer
1
2

On September 20, 2005, then prime minister P.J. Patterson and leader of the Opposition, Bruce Golding, signed a Declaration on Political Conduct in Parliament amid their parliamentary colleagues and in the presence of the political ombudsman, Bishop Herro Blair. The declaration was, among other things, designed to disassociate publicly, political leaders from criminal elements and criminal activity. The declaration required that members not knowingly associate themselves with persons in the pursuit of illegal activities or with any kind of violence but would cooperate with the security forces to bring such persons before the law.

Mr Golding, who is now the prime minister, commended the Private Sector Organisation of Jamaica (PSOJ) for its tenacity in bringing the declaration to fruition and said that if the political system was discredited it would be an indictment against all political leaders. He further said that the declaration would be meaningless if politicians were not willing to "take action against their own". They must, in other words, "enforce the rules". Mr Golding had also said on another occasion that the security forces should be free to go after criminals wherever they are.

A PARALYSIS OF SECURITY

Three weeks after becoming security minister, Dwight Nelson addressed the nation. He was as sincere as he was tough-talking. The criminals of the land, he said, were not ordinary criminals. They were a threat to Jamaica's sovereignty and the authority of the State. At least 120 of the most dangerous criminal networks existed in our communities, he said, and were responsible for 80 per cent of all major crimes. Their activities stretched across 10 parishes and, insisted Mr Nelson, had to be crushed. Minister Nelson advised, "The leaders and supporters of these networks must be removed from the communities within which they operate. A direct assault on them must be launched." All of this went with his worthy aim to restore public order so as to protect the rights of every law-abiding citizen to go about his or her legitimate business free from fear.

When gunmen murdered three policemen and two security guards in May 2005, Dr Peter Phillips said there would be no safe haven for gunmen and they would be tracked down wherever they were. Deputy Commissioner of Police Mark Shields said overwhelming evidence pointed to the gunmen being from western Kingston. Two years before, a major police operation in western Kingston had left many dead and injured amid a shrill and largely political defence of gangs in what former commissioner of police, Hardley Lewin had famously called the "mother of all garrisons".

It was an ill-fated, reckless and foolish decision for Bruce Golding to have taken western Kingston as the constituency of the future prime minister of Jamaica. It flew in the face of everything he said he stood for as leader of the National Democratic Movement. It flies in the face of everything we as a nation want to condone. But we condoned it. We never questioned it in the elections of 2007.

Golding's well-compromised situation now threatens to freeze us out of the lawful community of mankind. Think of Mr Nelson as minister of national security caught between his prime minister and minister of justice. Think of our police commissioners and acting commissioners caught between them all. There is no leadership. There is paralysis. It began with the moral compromise conceded for a political safe seat which has grown into a paralysis of justice and safety. A country cannot be governed if its institutions for justice and safety are paralysed.

A PARALYSIS OF MORALITY

It took the PSOJ eight months to say something. But it now says that the Government should allow the courts to decide on the extradition of Mr Coke. The PSOJ cannot be commended for tenacity this time or for consistency over time. It is mere coincidence I am sure that its statement came shortly after a prominent business/political figure was denied entry to the United States. Rumours have naturally been going around about which other political-business connected persons have had their American visas suspended or could suffer that fate. Probably the PSOJ or those whose members are closely associated with the Government want to create some distance for their own safety. Many Jamaican bank accounts exist in the US. People don't want to be separated from their money.

In 2005, the PSOJ acted in a hurry when a businessman was sadly killed at his business place in May Pen. It quickly held a rally at Emancipation Park, closed business places for half a day, and prepared the Declaration on Political Conduct that it wanted politicians to sign. There was much moral grandstanding, high-level campaigning and prominent business advocacy. In contrast, it has taken the PSOJ eight months to issue a statement on the current crisis. It should really revive its high-level campaign for that declaration and hold its members and all politicians to it. Let there be a rally at Emancipation Park. The PSOJ should show some moral leadership.

Who is to be held accountable for all this then? In just half its term, three ministers of national security and three permanent secretaries in that ministry have been tried. Last year's murder rate was a record one. January's murder rate was 16 per cent higher than for the same month the year before. The American State Department's International Narcotics Control Strategy Report has pointed its finger directly at the Government for failing on crime and refusing to extradite Coke. The international press continues to expose the story reminding us that there is a limit to what we can spin, deny or cover up.

The latest coverage has come from the prestigious Economist in its March 11 publication. It points to the overlaps between Coke's history in Western Kingston, Golding's constituency (and Seaga's before), links with the Shower Posse, its past rampage and the mysterious fate of the elder Coke. It is clear that Golding has failed as prime minister by failing our safety, justice and national reputation. Now there is a new controversy shrouding the Government, a connected Jamaican law firm, a US law firm that deals with extraditions and the US Department of Justice requiring the contractor general to investigate.

If we don't hold the Government responsible, the US will. The case of Honduras is relevant. To punish leaders of a military coup last year, the US government revoked the visas of the coup leader. So too were those of the foreign relations minister, the attorney general, a number of Supreme Court judges and government officials. We just hope something gives before the next tourism advisory comes out.