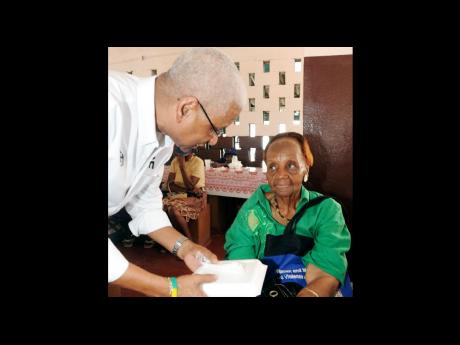 LIME's regional vice-president, Errol Miller, talks with 62-year-old Joyce Phillips before he hands her a box of food at the Marie Atkins Night Shelter on Hanover Street in Kingston last week during the telecommunications firm's celebration of Kindness Day. - Norman Grindley/Chief Photographer

Malcolm was one of the residents who took part last Wednesday in LIME's Kindness Day across the Caribbean.

"I'm homeless," Malcolm said, playing with multi-coloured bead necklaces he made himself.

He lived in Montego Bay before moving to Kingston in 2007. After losing his home and documents such as his birth certificate in Hurricane Ivan, he lived on the streets.

"Me neva stay long on the street," he said. "When I was there, I used to manage little bit and wash in an area on Marcus Garvey Drive."

Nowadays, he gets an allowance of $700 from the shelter and spends it on shoe polish, soap and a phone card.

The downtown shelter is one of four locations in Jamaica that benefited from LIME's initiative. Other locations were the Spanish Town Infirmary in St Catherine, the Committee for the Upliftment of the Mentally Ill (CUMI) headquarters in Montego Bay, and the St Ann's Bay Infirmary.

Chief Executive Officer for LIME Caribbean David Shaw said the telecommunications company has the "capacity to effect change", and have a positive impact on various communities in the region.

Wednesday's pilot project, helping more than 500 people across Jamaica, is what LIME hopes to be the start of an annual routine.

"If they came tomorrow, I would be here with them from morning until evening," he said.