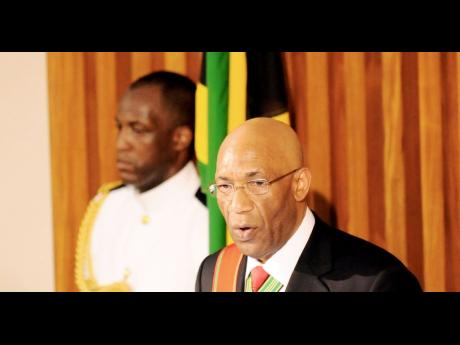 Throne speeches are, by nature, uninspiring, tedious and lifeless. Redemptively, they have become shorter and, hence, a little more bearable. But some eloquence did manage to break through last Thursday as Sir Patrick Allen dutifully held up to the annual ritual at Gordon House. The Church prepares you for the discipline of rituals.

But in what seemed to be his own words, if I know Sir Patrick well enough, he said to the applause of even the Opposition : "Our strength and resilience as a people have been tested and we have not been found wanting." There was more of the trademark Sir Patrick's love of the good turn of phrase: "We have ridden the waves and, although the sea billows rolled and buffeted our ship, we have weathered the storm." But that might be more eloquence than entire truth, Sir Patrick. It might be more of what some scholars call 'magical realism', which is not, philosophically, untruth.

It might simply reflect the "renewed hope and cautious optimism" of which he spoke just before. But even if we had weathered the storm, as the governor general assured us, there are still storm clouds threatening. The grave issue before us is whether we as a people have the common vision, commitment to nation building and social capital necessary to truly help us to weather any storm on the horizon.

When the major bus fare hike lands on All Fools' Day, will the people have the economic wisdom to understand that it was inevitable; that we simply had to shed the Jamaica Urban Transit Company losses; that we could not go on subsidising what we simply cannot afford; and that it is living in a fool's paradise to keep spending what we are not earning?

When, as a result of "fiscal responsibility", people begin to lose their jobs - and their dreams - what will infuse them with a sense of passion to build this "new Jamaica" that the Jamaica Information Service ads are telling us about? What will excite them about Jamaica and its prospects?

When under-16-year-old schoolgirls and school drop outs begin to feel the pinch with the bus fares, what will keep them from the lecherous arms of dirty old men who will be only too willing to buy them with filthy lucre? This is a hold-strain Budget; one to keep our heads above water, not so much one to help us to ride the high seas. At least not immediately.

But more of Sir Patrick's eloquence as he crescendoed to his climax: "We have not found calm waters yet, but the worst has passed. We must now mend our sails, set our compass and conquer the high seas." Good, smooth writing. Oh if its reality could be as smooth! We need, at least, to know where we are going to set our compass meaningfully. That is what we don't know as a people.

I am not talking about the Government or the Planning Institute of Jamaica - whether in consultation with the people or not - setting out a 2030 vision. I am talking about a vision which is internalised by Jamaicans; which is embraced at the emotional, affective level; a vision incarnated in the people's actual values, not ascriptive values. You know the people's actual values through
their artistic culture, particularly their music and drama, as well as their
lifestyle.

Are Jamaicans in this bling, flossing culture ready for the
International Monetary Fund's (IMF) austerity budget? Are we ready to live
within our means, to have the lemonade instead of Hennessey on the lemonade
budget? The Private Sector Organisation of Jamaica has a data-laden paper
outlining its economic programme and demonstrating just how much Jamaicans are
living beyond their means: "Jamaica overspends twice as much as the region and
some of the most cash-strapped countries in the world. This year, the Government
will spend $95 billion more than it earns."

But we are a bling people. We live to spend, to model, to show
off, to pop style. That's out culture; that's who we are. We not in this IMF
belt-tightening thing. That's foreign to our culture. Go weh wid that!

That is why we are always vulnerable to populist politicians
sneaking up on us and whispering in our ears that there is a better, easier way.
Those words are very seductive to our bling ears. Sacrifice is an expletive to
us. Banding belly is bad wud.

The financial analysts, talk-show hosts and columnists will be
having a field day analysing this or that aspect of the Budget, using
highfalutin terms which the ordinary man can't understand. They will beat the
economic issues to death. The cultural and social issues will be given
short-shrift. But they are crucial.

The 1998 GraceKennedy Foundation Lecture by Professor Don
Robotham, whose voice is greatly missed in these pages, has never been
surpassed. In a presentation titled 'Vision and Voluntarism: Revising
Voluntarism in Jamaica', Robotham said, "The question to be answered sooner
rather than later would be, in true Jamaican style, 'Why should I put out an
effort to increase the living standards of all Jamaicans as opposed to those of
myself and my immediate circle of family and friends?' "

He went on: "In other words, the acceptance by large numbers of
Jamaicans of mutual responsibility for the achievement of such an ambitious
economic goal implies that a certain set of moral sentiments has already been
accepted. The economic goals, therefore, presuppose that the moral goals have
taken root at least among a substantial minority of leaders of the society."

This is why I have always said that Adam Smith, the economist, who
wrote The Wealth of Nations, has to be read alongside Adam Smith, the
philosopher, who wrote The Theory of Moral Sentiments.

It's no use reposing any great hope in our youth who enter
politics, if they end up scheming to defraud the country's coffers and lying
through their teeth. It's no use putting all your eggs in the private sector
basket when well-known and prominent business people are among our most
consistent tax avoiders and tax cheats.

No use trusting our national security to corrupt cops and our
national welfare to power-hungry, status-seeking, greedy politicians just
grabbing for themselves and their cronies. Having a few Greg Christies here and
there and even making legislative changes to give them more power to prosecute
will be necessary, but not sufficient to blunt our culture of corruption. The
culture has to change.

This IMF budget will put us to the test. It is not just the
Government which is being tested. Don't focus on Bruce Golding and his Cabinet.
It is the whole country which is in dire straits. The problem is not the IMF and
the discipline it imposes.

The IMF is imposing constraints which we should have long put in
place ourselves. It shouldn't have to come to this. But which politician likes
to risks taking unpopular decisions? Look at the emotional reaction to the
economically logical, overdue and unavoidable decision to sell Air Jamaica to an
entity with a serious proposal. That we are even having a debate on that shows
the fool's paradise to which we are inextricably wedded.

Getting rid of loss-making entities will have consequences. The
point is, we have been postponing these consequences for too long. And this has
inter-generational implications, for it is fundamentally immoral and unjust for
us to be transferring all this debt and economic burdens to our children and our
children's children.

But the issue goes deeper - to our values. A leading Jamaican
economist told me last week that our most distinguished economists are living
abroad because they can't work for University of the West Indies salaries. He
said it to bemoan what he regards as the paltry salaries being offered by UWI.
But what struck me was the fact that our brightest minds are so motivated by
material rewards and not afflicted by the nationalistic bug which would make
them want to return home to work for less and to put up with your social
problems, to make a contribution.

If our best minds wait until Jamaica becomes "the place to live,
work and raise our families" - as the PIOJ vision enjoins - then how will we get
to build that Jamaica? The fact is, to really build Jamaica, our best minds will
have to forego some luxuries of First-World living and make some sacrifices they
would not have to make living in America or Europe. They are not prepared for
that.

"The building of our nation, the creation of a strong economy that
will support the needs of our people, and the attainment of peace and prosperity
for all is the task at hand. Let us to that task repair." But that can't be
done, Sir Patrick - eloquence aside - with the type of values and attitudes
which we have. We have to repair that first. Our economistic analyses completely
overlook that fundamental point.

Ian Boyne is a veteran journalist who may be
reached at ianboyne1@yahoo.comor
columns@gleanerjm.com.