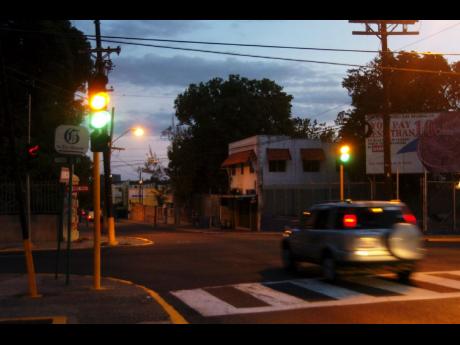 A car speeds through this faulty traffic light at East and North streets in Kingston in this April 7, 2007, file photo. Motorists need to ensure that they pay proper attention to traffic lights and cross with caution. - Junior Dowie/Staff Photographer

Traffic lights, colours and pavement markings are on our roadways with the aim of making streets and highways safe. They are so designed to control the flow of traffic. Can you possibly imagine a Jamaica with roads where signs, colours and pavement markings are non-existent? Peter Salovey, in the book Psychology, makes the point that our ability to see the world in colour not only provides us with stirring aesthetic experiences, but also helps us to make important distinctions among objects in our environment.

Colour is really a sensation which is aroused when light falls on the retina of the eye. However, colour has such a broad meaning. The psychologist describes colour in terms of visual perception; the physicist may define colour in terms of qualities such as wavelength of light and its intensity. Red, for example, has a wavelength of 630-770, while green is 490-640.

Colour blindness could be described as the inability to recognise the colour red, blue-violet, or some combination of these.

"Anomalopia is partial colour blindness," says Orville Henry of the Lions Club of Kingston, who deals with eye care and who carries out the testing of the eyes of drivers. Anomalopia is a case in which reds and greens are poorly recognised. Colour-ßblind drivers must take certain precautions. For example, special attention must be given as it relates to determining traffic signals.

As motorists, are we colour blind? Can we identify the colour red on the signs or the greens on the traffic lights?

All colours that are associated with driving are of paramount importance. For example, the amber or yellow when shown alone, dictates that traffic should stop before entering the intersection. The amber light warns that the signal is changing from green to red. It means stop if possible; and when the red light appears, the motorist is prohibited from entering the intersection. "For example, the red signifies that the driver stops before the intersection or crosswalk. It signifies yield, do not enter or wrong way," says a Sergeant at the Matilda's Corner Police Station. He also explained that a flashing red light means the same as a stop sign. The red light requires of all drivers that they stop at the marked line. Now, if there is no marked stop line, the motorist should stop before entering the crosswalk, wait calmly and patiently and stay focused.

The green light means proceed if it is safe to do so. The green light also says go, only if the intersection is clear. It requires that motorists yield to pedestrians and vehicles still in the intersection. Also, if the motorist is making a right turn, he should yield to the vehicles going straight. A green arrow, which points right or left, signifies that the driver may turn in the direction of the arrow. A green arrow which is pointing upward (like those at the toll plazas) means that motorists go straight ahead only. Green speaks of distance, direction and information.