The ICC and the Caribbean 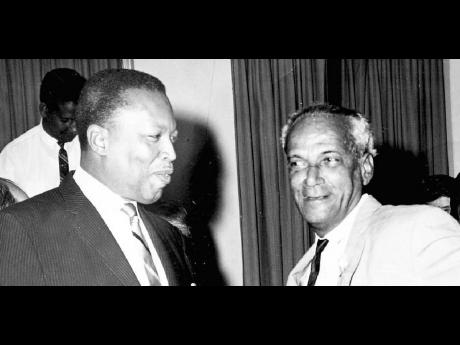 Then Prime minister, Hugh Shearer (left) and the leader of the opposition, Norman Manley, in conversation during the adjournment of the opening session of the United Nations Seminar on Human Rights at the Myrtle Bank Hotel in Kingston, April 1967.

The proposal was the brainchild of the eminent Caribbean statesman, A.N.R. Robinson, who was at that time the prime minister of Trinidad and Tobago. The item was referred to in the International Law Commission. I was then Jamaica's representative to the Sixth (Legal) Committee of the UN, and when I was elected to the International Law Commission in 1991, Marjorie Thorpe, Trinidad and Tobago's ambassador to the UN, specifically asked me to keep a watchful eye on the drafting of the ICC statute by the commission. To that end, I made sure that I was a member of the working group entrusted with that task, which was completed in a relatively short time.

When the item was introduced in 1989 by Trinidad and Tobago, the reception in the Sixth Committee and the General Assembly was lukewarm. But when the Yugoslavia conflict broke out in 1991, the Europeans came aboard and pressed for the establishment of an international criminal court.

The statue of the ICC is, arguably, the most important international instrument to be concluded since the end of the Second World War and the adoption of the Charter of the United Nations. And I have spent some time explaining the very significant role played by Trinidad and Tobago and the Caribbean countries - a group of small states - in the establishment of this historic institution because it is a role that is not widely known, and in respect of those who are aware of it, not sufficiently acknowledged by them. We need not delve into the reasons for this ignorance and indifference.

But having commendably initiated the process, let us see how well we have performed in its completion.

The ICC statute, adopted in 1998, has now been ratified by 110 states. Within the Caribbean, the statute has been ratified by Trinidad and Tobago, Antigua and Barbuda, Barbados, Belize, Dominica, Guyana, St Kitts and Nevis, St Vincent and the Grenadines and Suriname.

In 1998 , I signed the Final Act on behalf of Jamaica and in 2000, Jamaica signed the statute, but has not yet ratified it. Nor has The Bahamas, Grenada, St Lucia.

I suggest three reasons for Caribbean states to ratify the statute of the ICC.

First, the main purpose of the Court is to ensure that serious breaches of international criminal law and international humanitarian law do not go unpunished. We in the Caribbean have a history that has made us all too familiar with impunity in respect of atrocities that today would readily qualify as crimes against humanity. The inhuman and degrading practice of slavery carried out in the West Indies for over two centuries should prompt all Caribbean countries to support an institution whose primary function is to put an end to impunity for serious crimes.

Second, a cornerstone of the Court's statute is international human rights, including the protection of the rights of the accused. Caribbean countries have always been at the forefront in the struggle for human rights and have a strong history of valuing human rights.

We are not new to the business of defending human rights. Jamaica was among the first set of countries, if not the first, to enact legislation imposing trade sanctions against apartheid South Africa. Jamaica took this action in 1957 under the leadership of Premier Norman Manley while still a colony of the United Kingdom. It was the initiative of Prime Minister Hugh Shearer of Jamaica in 1963 at the UN that led to 1968 being designated International Year of Human Rights to mark the 20th anniversary of the Universal Declaration of Human Rights. The Caribbean Westminster Model Constitutions provide for the protection of fundamental human rights, including the rights of the accused. Generally, the Caribbean can take pride in the system of parliamentary democracy that it has followed over the last five decades.

Moreover, Caribbean countries, which have fought for their independence, and therefore, value new sovereignty, need have no fear of the ICC.

The greatest contribution that the ICC has made to the international community is the principle of complementarity entrenched in its statute. The court will only exercise jurisdiction where a national state is unwilling or unable to do so. Therefore, we can continue to deal with serious crimes within our own countries. But joining the ICC will allow us to be more engaged in the international legal and diplomatic community, working together to prosecute the most serious crimes in countries where the rule of law is lacking and rogue leaders fragrantly violate human rights. Caribbean countries were once the scene of the most horrifying human-rights abuses known to humanity, and it is therefore, our historical and moral responsibility to do whatever we can to make sure that the darkest chapters of human history are not repeated on other shores and in other lands.

As a Jamaican and the current president of the United Nations International Criminal Tribunal for the former Yugoslavia, I have a strong personal and professional interest in witnessing the active participation of my country and other Caribbean nations in the ICC and in witnessing the continued growth and success of the court. And it is my hope that one day, we will be able to proudly welcome a Caribbean national as the president or the prosecutor of the ICC.

A unified Caribbean membership in the International Criminal Court would be a powerful demonstration on a regional level that we take, with the utmost seriousness, our commitment to human rights, the global fight to end impunity and the search for justice.

It is high time for all Caribbean countries to sign and ratify the Rome Statute.

Patrick Robinson is president of the International Criminal Tribunal for the former Yugoslavia. Feedback may be sent to columns@gleanerjm.com