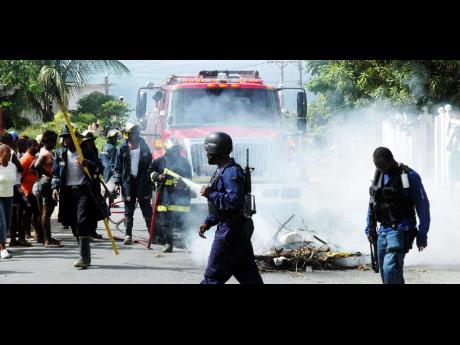 Members of the security forces standing guard in front of a fire truck in this 2006 photo depicting unrest in Rose Heights, St James, where three men were reportedly shot dead by gunmen. - file

While crime continues to paint Montego Bay into an ugly corner, numerous individuals involved in nefarious activities such as the infamous 'lotto scam', the illicit guns for drugs trade, police corruption and other vices have met their proverbial 'waterloo' in the battle between the lawful and the lawless.

Although crime seems to be stifling Montego Bay and threatening to undermine its position as the nation's premier tourism destination, several institutions including the security forces, social groups and the Church have been upfront and behind the scenes attempting to rescue the situation.

"The police alone cannot do it," said Superintendent Paul Stanton, head of the police's community safety and security in Area One, at a recent Gleaner Editor's Forum. "We all need to work together to take back our communities from the hands of criminals."

The drug trade, especially the transatlantic aspect that has been generating significant international attention in recent years, has taken a severe beating in recent times as various crime-fighting initiatives by the local police and their United States (US) and United Kingdom counterparts have taken out several major players.

In 2004, Montego Bay was dragged into the international spotlight when then US President George Bush declared businessman Leebert Ramcharan a drug kingpin and sought his extradition to stand trial in the US.

Following challenges in the local courts, all except one of the arrested men were extradited to the US to stand trial. Some like Ramcharan were convicted and sentenced to extended prison terms, while others have accepted plea deals for reduced sentences.

The Lotto Scam gets a JOLT

The Lotto Scam, which initially left several communities awash with cash acquired through conning unsuspecting American citizens out of an estimated US$30 million for the past seven years, is no longer operating with impunity thanks to the intervention of the local police and their US counterparts, who have been tracking down and arresting scammers.

The war against the scammers, which intensified after it came to light that the illicitly gained cash was being used to buy high-powered guns for criminal gangs, has resulted in numerous arrests and convictions, especially since the formation of The Jamaican Operations Linked to Telemarketing (JOLT) - a task force made up of both local and American operatives.

Since the emergence of JOLT, persons fingered as major players have been arrested, including one individual whose assets were said to be worth J$80 million. Several American citizens, who were victims of the scammers, were brought in to testify in some of the cases.

Measures are now being put in place, through the local court system, to separate the scammers from the assets they acquired through their activities by way of the forfeiture through the Proceeds of Crime Act.

While JOLT has been enjoying some success, the scam is said to be constantly attracting new players to include even schoolchildren.

"Yes, students are involved and they are very bold with it," Superintendent Fitz Bailey, head of the Organised Crime Investigation Division, recently told The Gleaner.

Scammers and gangsters are not the only persons who have reportedly benefited from the illicit lotto scam as several police personnel have found themselves in trouble with the law on account of their alleged involvement in the illicit scheme.

It is an open secret in and around Montego Bay that some policemen, having operated as bodyguards/best buddies to scammers, have been targeted by criminal gangs seeking to extort them. There have also been cases where the police have been accused of robbing scammers, sometimes at gunpoint.

Things came to an inglorious head for the Police High Command on May 14, 2009 when former Police Commissioner Rear Admiral Hardley Lewin interdicted 18 cops at the Mt Salem Police Station, accusing them of "recruiting and planting a fake cop at the Mount Salem Police Station in St James to assist with their illegal activities".

Subsequent to the Commissioner's action, some of the implicated cops were asked to retire in the national interest.

In the matter of the so-called fake cop, he reportedly worked out of the Mt Salem Police Station for six months, carrying out regular police duties including going on raids armed with an M16 assault rifle. After he was busted, he reportedly furnished the Commissioner with damning evidence of scandalous acts of corruption against the individuals with whom he worked.

Not a safe haven for most wanted men

While corrupt cops continue to be a 'black eye' for the St James Police Division, their law-abiding colleagues have been enjoying a fair degree of success in the smashing of criminal gangs, some of whom have lost several of their more prominent members in confrontations with the police.

In looking at the men, who have surged to the top of the list of St James Most Wanted since 2001, only a few have survived for more than a month once the spotlight was turned on them.

2002 - Brian 'Bruno' Stone: Identified by the police as a top player in a murderous rampage in Rose Heights.

2004 - Eric 'Sandokan' Brown: Accused murderer, who was on the Federal Bureau of Investigation's Most Wanted List when he was killed.

2005 - Michael 'Banna' Granstan: Implicated in several murders, including the killing of an ex-policeman.

2006 - Delano 'Bigga Crime' Williams: Said to be the enforcer for the Stone Crusher Gang.

2007 - Garfield 'Don' Sawyers: Implicated in several murders and was said to be the leader of the Fresh Roses Gang.

2010 - Richard 'Richie Blacks' Lawn: said to be the last known leader of the Stone Crusher Gang.

While most of the prominent institutions in and around Montego Bay have shown no more than a passing interest in social intervention programmes, the Rose Heights community, through a bold initiative championed by Pastor Knollis King, established the Rose Heights Covenant of Peace just over six months ago.

With a mandate to rid the community of lawlessness, the group has taken a zero-tolerance approach to crime. Just last weekend, a group of residents apprehended a gunman, seized two firearms and a quantity of ammunition and turned him over to the police. Under the Rose Heights Covenant of Peace, the following tenets have been established and agreed to by members of the community:

Individuals like community activist O'Dave Allen, through the Community Organisation for Management and Sustainable Development - the umbrella organisation for Operation PRIDE sites and marginalised communities in western Jamaica - has steadfastly been lobbying Government to regularise squatter communities, arguing that unless they are regularised they will continue to prove attractive as hideaways for criminals.

With the new head of the St James Police Division, Superintendent Merrick Watson, taking a hands-on approach to crime-fighting and getting some early success with a series of successful operation against known gangsters, there is now renewed hope in Montego Bay that the notion 'crime does not pay' will be rigorously enforced.