Foster-Hylton to do MRI scan 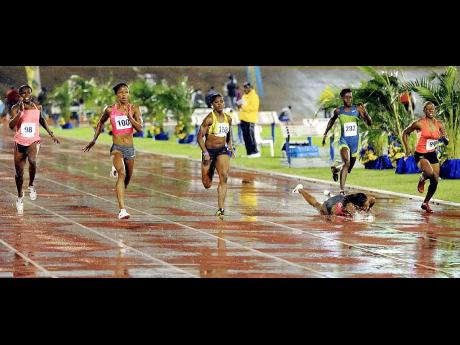 World 100m hurdles champion, Brigitte Foster-Hylton (third right), falls to the track after picking up an injury while competing in the 100 metres event at the University of Technology Classics, at the National Stadium on Saturday. - Ian Allen/Photographer

World 100m hurdles champion, Brigitte Foster-Hylton, is scheduled to have an MRI scan done today on an injury she suffered to her left hamstring, on Saturday night, during the third staging of the University of Technology Track and Field Classics at the National Stadium.

However, the 35-year-old is already hoping to get back on the track in two weeks' time.

MVP club-mate and former World 100m record holder, Asafa Powell, also suffered an injury scare at the rain-drenched meet, but by all indications, seems to be fine after recovering from a reported cramp to his left calf muscle.

This would be welcome news as both athletes are scheduled to feature at the Doha Diamond League meet on May 14.

Foster-Hylton, who was competing in the flat 100m, pulled up at around the 70-metre mark and fell heavily on the track, as MVP teammate Sherone Simpson went on to win in 11.58 seconds.

Speaking to The Gleaner yesterday afternoon via text messaging, Foster-Hylton pointed to considerable swelling in the area and said she was doing her best to follow the doctor's advice and stay off her feet as much as possible.

"I will have it examined tomorrow (today) and have an MRI done. All I can say now is that I'm hurting. In bed right now ... just taking the doctor's advice to stay off it as much as possible since it's swollen.

"I think I'll be running again in two weeks' time," she added.

MVP president, Bruce James, is also hoping for the best.

"Yes, it was a hamstring injury but at this point we are not certain of how serious it is. She received medical attention immediately after the injury at the (National) Stadium and right now she is just resting it," said James. "We are waiting for the word from the doctor to see how we move forward, so until we hear from the doc, we cannot say anything with finality."

Meanwhile, Powell is expected to be back in training today after a sharp pain in the calf muscle of his left leg caused him a great deal of discomfort during his 200m run at the same meet. Powell raced out the blocks but was in obvious pain as he ran the curve. The powerful sprinter decreased his speed significantly but still managed to win in 21.27 seconds after basically walking across the finish line.

"Asafa (Powell) is fine. He felt some cramps during the race and basically just ran out the rest of the race as slowly as he could as a precautionary measure, to prevent further damage," advised James. "Asafa should be back in training immediately so that is good news."