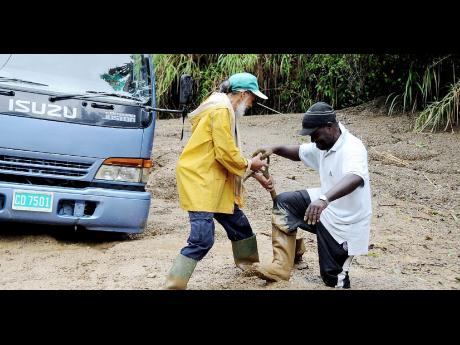 A man gets help to free himself from mud that blocked sections of the Guava Ridge to Mavis Bank main road after overnight rains caused landslides in the area Sunday. - Ian Allen/Photographer

The National Works Agency (NWA) fanned out across several parishes yesterday to begin the clearing and reopening of roadways left impassable by heavy rains over the weekend.

"The first thing we have to do is to make sure that people can go about their business," NWA's Communications Manager Stephen Shaw explained.

Of the five parishes targeted by the NWA, Clarendon appeared to be the worst affected as up to late yesterday parochial roads in Cabbage Hill and Carty Hill remained impassable.

Shaw told The Gleaner that the road in Cabbage Hill was blocked by a large boulder and other debris, while the Carty Hill road had "drainage issues".

The Kupius to Colonel Ridge main road, which was blocked by boulders and other debris, was reopened to small vehicles by late afternoon.

The Danks to Mearsbridge main road, near Crooked River, was also reopened to small vehicles late yesterday after NWA workmen replaced a "mini-bridge" that was washed away by the heavy rains.

Landslides also blocked the main roads between Grantham to Trout Hall and May Pen to Soursop Turn, but those were cleared early.

In Portland, Shaw said Buff Bay and the Rio Grande Valley were affected by breakaway landslides.

He pointed out that the situation in the Rio Grande Valley was even worse because the weekend rain had exacerbated damage done by Hurricane Gustav in 2008.

The NWA also cleared a number of roadways in St Mary, St Andrew and St Thomas, where the Golden Grove main road near Hordley Crossing was flooded.