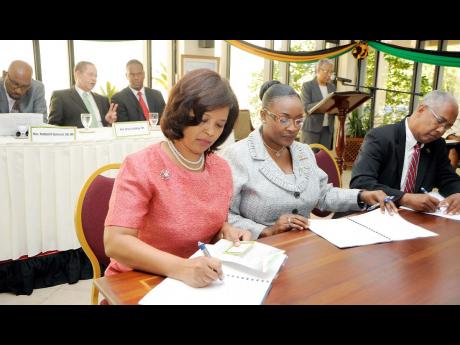 Golding said although Government had put in place a "rigorous" procurement procedure, this did not always guarantee that Government gets the best deal.

"As much as we need to have and ensure transparency, we need to provide some amount of flexibility for which we will hold the decision makers accountable to make sure we get the best possible rate," he said.

However, Golding made it clear that this was not an attempt to "go back to the days when people just award contracts to people of their choice".

The prime minister was speaking at Jamaica House on Wednesday, after the Ministry of Health signed 35 of 43 contracts totalling over $2.3 billion to purchase essential pharmaceutical items for the public health sector.

Health Minister Rudyard Spencer, who also spoke at the signing, said his ministry was able to negotiate more favourable contractual terms with 71 per cent of the 43 suppliers.

In commending his colleague, Golding said this was in line with the objectives of the review, which he added would be done in "close and constant" dialogue with the Contractor General's office.

Spencer said the contracts would cover more than 719 items and last for up to 18 months.

Spencer pointed out that the purchase of pharmaceuticals was the single most costly item on the health budget except for wages, noting that the $2.3 billion is a 167 per cent increase over the $898 million spent during the 2004-05 financial year.

In addition, the health minister said the use of pharmaceutical drugs had increased by 40 per cent since his government abolished user fees for public hospitals two years ago.