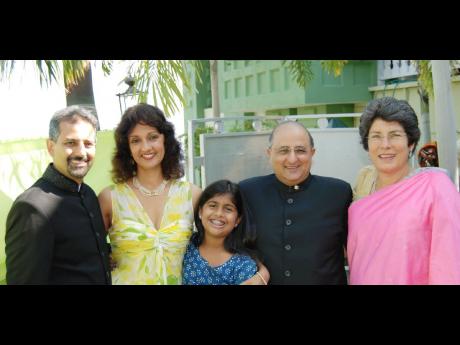 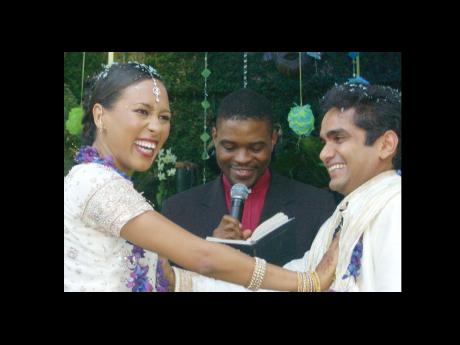 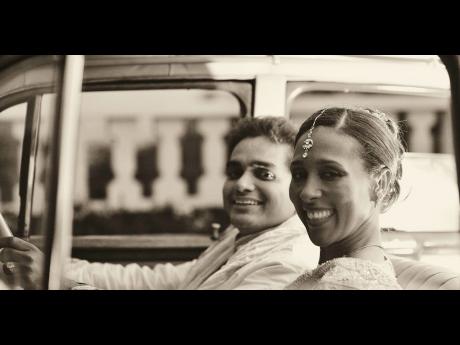 There go the Wailas! - Contributed photos 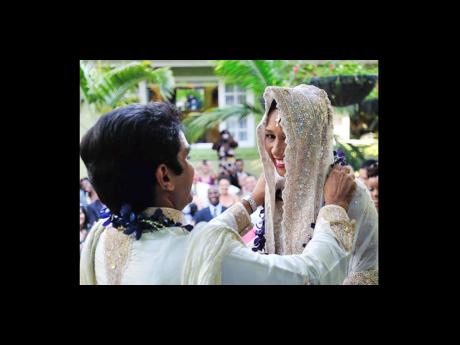 Have you all ever been to a wedding, where the bride and groom, were actually relaxed to the point of not only having fun, but joking with each other throughout the ceremony?

Well, that was the case at the wedding of Vinay Walia and the charming and stylishly beautiful Sidjae Robinson, two Saturdays ago. It was a celebration of their love and a joy that will long be remembered for its beauty and promise of a very happy ending.

The absolutely fabulous wedding ensemble of the couple could be compared to a fairy tale. Their outfits complemented each other. Both were regal; he looked like a dapper prince and she, like the dazzling princess. A halo of love hung over her throughout the ceremony, as brilliant as the diamond that beamed from her finger, after they had exchanged their I dos in the garden theatre and 'cathedral' at Montgomery Road, Stony Hill, St Andrew.

What a celebration it was too, as relatives, friends and colleagues of bride and groom journeyed from around the world, some through three different time zones to join the couple in celebrating their love.

Vinay Walia, dubbed the 'finance minister' of the Guardsman Group, an Indian by birth and Jamaican by nationality, arrived here almost a decade and a half ago. Since his arrival, he has immersed himself in the Jamaican way of life and culture, making friends fast, all across the island, and becoming well known for his joie de vivre. He is known also for his love of a good party, and has played host to a number of fabulous dos at his golden triangle condominium.

He met his wife Sidjae, a businesswoman and former banker, at the Guardsman Group weekly, Friday night soiree.

Some say, it was love at first sight, but for friends, it was clear from the start that theirs was a mutual attraction, made evident by the fact that they started spending more time with each other and became 'an item', on the social scene. They showed up for events and were spotted out on dinner dates and on weekend get-aways out of town!

When news of their engagement was first made known, friends and relatives greeted it as a very positive development. Their warmth and affection shone through their initial non-committal responses when questioned by friends whether they were really seeing each other. Love won over and the two decided to marry.

Dears, scheduled for 3:30 p.m., guests began gathering an hour early. Talk about making an entrance! My dears, the bride was some 40 minutes late but when she arrived, it was a Kodak moment. She looked absolutely stunning in complete traditional Indian regalia of gold and ivory, complemented with traditional Indian jewellery and accessories - Lehenga Choli, encrusted with precious and semi precious stones. Her head piece, a dazzling Maang Tikkato was the perfect crowning jewel. The groom looked equally resplendent in his traditional Indian ensemble.

With the theme of the wedding being about fusion, the ceremony signalled the joining of hearts, two lives, two families and two cultures; he being Hindu and she being Christian. The colour theme was chosen to reflect their different nationalities, - peacock blue, reflecting the Indian national bird, and green, representing Jamaica's national bird. These were reflected in the outfits of the bridal party with matron of honour Patricia Campbell, and bridesmaids; Nicollette Shirley, Marguerite Chambers and Nancy Davis, all sporting the wedding colours. Best man and brother of the groom, Ajay Walia, sported a traditional Indian ensemble similar to the groom's; while groomsmen, Vikram Dhiman, Rajan Trehan and Ueli Bangerter, all sported the wedding colours!

The wedding ceremony was officiated by Reverend Nicholas Forreste. The bridal party marched to "The Moment" by Kenny G; followed by the bridal march, by Jonathan Cain; and the song of worship, being the Refiner's Fire.

Following the official welcome, Marcia Chin read from the Bible followed by legal declarations and the blessing of the couple. The first of many touching moments came when the bride's mother, Fredrica Robinson, marched down the aisle and gave her daughter away.

The ceremony of love started with the bride and groom exchanging garlands, followed by the exchange of vows and rings, and the tying of the knot, (the groom's scarf tied to that of his bride). And then there was the ceremony of the Sapta Padi (The Seven Steps). Here bride and groom circled the flame of love, seven times, each leading alternately as they made seven promises with the completion of each circle, to be fulfilled during their marriage.

When this was over, the bride and groom touched each other's hearts, while reciting, "I am installing you in my heart, from this day onwards. I will be loyal to you. This union was made in heaven. We ask God for his blessings. What God has joined, let no man put asunder".

After signing the register, the next tear-jerking act was when they both knelt and touched the feet of their parents, as a sign of respect, and to receive their blessings. And then there they were Mr and Mrs Vinay Walia.

The reception saw the bride and groom opening the dance floor with the song: This Magic Moment and dears, no mistake about it, magical it was!

Among those guesting, were: host Kenny Benjamin and companion Aloima Suarez and their son Brandon Benjamin; parents of the groom Shiv Vrat Lal Ahluwalia and Indira Ahluwalia, in from India; grand parents of the bride Noel and Iris Kameka; siblings; Amilkhar Brooks; Paul Robinson; and Lawrence Robinson and wife Dawn; uncles: Delroy Kameka and wife Diana; and Nelson Kameka; and her aunt Lilburn Mair.

Floyd Folkes entertained and guests enjoyed a gastronomic feast; festivities continued way into the night and almost everyone partied up a storm!