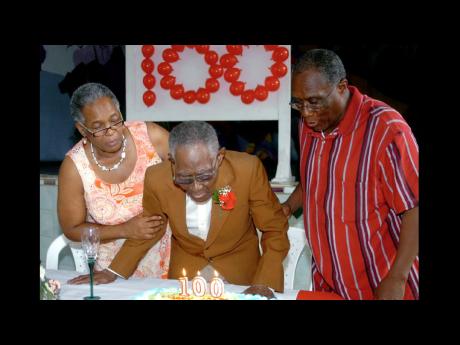 Centenarian Jerome Murray (centre) blows out the candles on his birthday cake with the help of son Calvin and daughter-in-law Valerie Beckford. - Winston Sill/Freelance Photographer

It's a milestone he wondered if he'd ever get to, but his prayers have been answered.

Jerome Murray celebrated his 100th birthday with a luncheon on Sunday, April 18, put on by family and friends at the St. Andrew Parish Church Hall. Though the rains kept a few away, including family from his native Nonsuch in Portland, it didn't diminish the warmth and love that was poured out for the centenarian. Whether they had known him for decades or just a few years, they all wanted to be part of it.

The eyes don't work so well anymore, and the right ear doesn't pick up the sounds like it used to, but Uncle Jerry, as he's known, is still thankful.

"I was praying for it all this time and I'm still mobile. Praise God I'm stronger than them," he said, referring to friends and colleagues who have passed on. Murray came to the Corporate Area in 1940. Before that, he was (his words) the handyman of his community, from working at his father's bakery to helping to teach at the nearby school. In Kingston, he got work with construction giants Hart & Hart, and that was that. He did a bit of everything but his main prowess was as a painter.

Electrocuted on the job

The Gleaner's North Street building is one of the many that he has helped to build. He remembers even being electrocuted while on the job! Still, he persevered, working with Hart & Hart for nearly 50 years, retiring in 1988 after a hernia slowed him down. The tributes all spoke glowingly of him including a special one from Governor General Sir Patrick Allen.

Uncle Jerry soon stood up and sang Lead Me My Saviour Lest I Stray before thanking everyone heartily for celebrating with him.