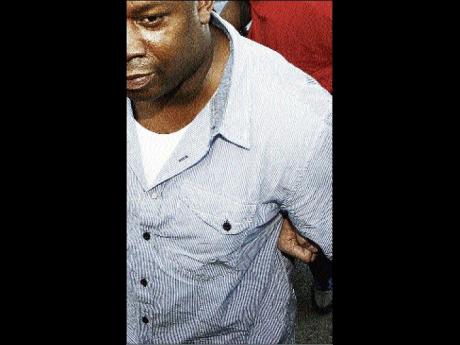 They flew out the same day, both destined for the same place, North America; one captured, the other released from a major part of his nightmare - and one not of Portia's doing. Bruce Golding and Christopher 'Dudus' Coke had to change course.

Golding is no doubt wishing that all his problems could fly away as quickly as Coke did last week. It has been a tough, gruelling and arduous 10 months for him since the United States first made its request for Coke's extradition. He took daredevil risks with his political career and on one particular weekend in May, the entire Jamaica did not know who would emerge as prime minister the following week. Golding survived, pleaded for the country's forgiveness, pledged recommitment to an agenda of change and, most important, offered not his sacrificial lamb but gave up the Big Bad Wolf that everyone wanted to see caged.

Just a few weeks ago the name Dudus drove fear and terror into the hearts of Jamaicans. Most people longed for the day when the United States would relieve us of him, but dreaded equally what mayhem would be created if ever an attempt was made to capture him. But after forces loyal to him were foolish enough to burn police stations and kill security officers, the State invaded his previously inviolable base in Tivoli Gardens, the mother of all garrisons, and easily crushed the resistance. Coke himself fled like a scared cat, only to surface last week in the arms, as it were, of a beleaguered pastor, thanking the police for sparing his life and begging for people's prayers; with photos of him wearing a wig and looking like a drag queen.

It was the perfect storm which swept Dudus away from Jamaica's shores last week. When United States marshals hauled him away last Thursday, dispelling the once commonly held view that 'dem can touch Dudus', there was a combination of factors which culminated in that action. No government in a small developing country in America's backyard can defy US Government orders without national consensus and strong nationalistic will. When that country is obsessed with bling and American materialistic culture, addicted to US visas and cynical about politicians, any appeal to principles of justice would fall flat.

Couple that with growing disaffection with a political administration savaged by the worst global recession in nearly 70 years, punishing tax packages, a public sector wage freeze, fear of massive public sector layoffs, inability to settle agreed claims to powerful public sector groups, a hold-strain, austerity International Monetary Fund (IMF) budget, and a galloping crime rate, and you know you couldn't beat the US. With so much of our trade tied to the US, with tourism being our top earner, and so many of our citizens there - and perhaps even more wishing to get there - you see why we can't mess with the US.

Not even when we have a good reason to do so, let alone when there was widespread suspicion that the country's interests and welfare were being held hostage for one alleged drug smuggler and gunrunner who was the strongman in the constituency of the individual "taking the fight to the United States".

The prime minister raised issues of treaty violation and issues involving the human rights of a Jamaican citizen. Let us all admit it: while most of us had never even glimpsed Dudus and he was never convicted in our court of law, all of us have pronounced him guilty of every single charge we have heard against him. We were in no mood to entertain even the possibility that the PM could really be standing up for human rights and justice. Indeed, most people were convinced the PM's reasons were a charade, a smokescreen. To most people, including Labourites themselves, it was just that the prime minister had to protect Dudus, his strongman, and could not afford to risk the wrath of his constituents by turning over their 'Lord and Father'.

There was something else, too. This country had reached the boiling point - the overflow - with regard to political donmanship. We have been fed up, sick to the point of vomit, over the blend of politics and criminality. We heard too many stories. We knew too much. We knew politicians were in bed with gunmen. We know the runnings and the dealings between politicians and criminals. Any perception that our prime minister could be deliberately stalling and dithering on an extradition issue involving the most feared strongman in Jamaica had to be potentially fatal to his career.

True to the facts

The prime minister, in his own apology, admitted that he knew that his public position on issues of law and justice vis-a-vis Dudus would not be believed and that people would think he was just protecting his own but he felt he had to be true to the facts, as he saw them. At this point, some of you are using expletives! Golding himself expected strong opposition to his position but what he miscalculated was how strong, sustained, and systematic would be that opposition.

It was the power of the Jamaican people - but primarily the intelligentsia - which pushed Dudus out of Jamaica. The media - with a significant role played by this newspaper and the Observer - were the main movers and shakers on this matter. Not since the 1970s has the press played such a pivotal role in influencing political outcomes. Golding almost went home. It was the editorial writers who, almost day after day, kept the Dudus issue before the public; often repeating the same facts ad nauseam but with greater ferocity; influencing the talk shows and the evening news.

People naively assume that because relatively few people read newspapers, the press is not influential. Newspapers influence what is discussed on the morning shows and on the talk shows. They influence what journalists see as important news for television. Editorials set the agenda. Reporters, editors, talk-show hosts and columnists generally follow. Television is the most potent in terms of mass impact, but the television editors are influenced by what they read.

When the Observer began to take a strident, relentlessly trenchant stand against the Jamaica Labour Party government, and when Clovis turned his acerbic and ruthless wit against the administration, they became impossible to ignore. When the two morning papers, representing some of the most powerful private sector interests and players in this country, were united almost daily, they were impossible to ignore, and Golding was too sagacious a politician not to realise what he was up against.

Not even Michael Manley in his darkest days of battle with the Jamaican media had been faced with such a hostile press on an issue.

Remember, Manley had the Jamaica Daily News and the Jamaica Broadcasting Corporation as strong backers, up against the powerful Gleaner and the conservative RJR.

Golding today has no support base in any part of the Jamaican media. It was the RJR Communications Group with its Trafigura flashback of Golding in Parliament which caused the ultimate outrage and which led powerful church groups to come together along with brand-name private sector and civil society groups to call for Golding to resign.

The Jamaican media were totally and vociferously united against Golding on this extradition issue and with such unity, he was fighting a losing battle. It is never a good thing when any Government has support which it can automatically count on in the media, and that is why a vibrant, free and even adversarial press is absolutely vital to democracy. If Jamaica did not have a free press, Dudus would still be over his kingdom in Tivoli today and criminals and terrorists would still have their comfortable base there. This country does not need a more memorable object lesson on the importance of a free, unfettered press.

Then there was the international press. The pressure from the international media was enormous as overseas Jamaicans began feeling our shame and our private sector, middle class and civil society groups began to reel under the pressure. Powerful business interests here were seriously threatened by what this Dudus matter was doing to our international reputation. The articles and newscasts in the big international media, some of which had exaggerations and wild rumours, represented a powerful force on the Jamaican Government. The issue was just not going away.

But it was the Manatt, Phelps & Phillips issue which really provided the oxygen to the extradition issue. If that had not been raised, it is unlikely that Dudus would be on US soil today. There is a man, whose name is, ironically, in that lobbying firm's name, whom the entire country is eternally indebted to - Dr Peter Phillips. Had he not seen that website or been aware of it (oh the value of reading!), the criminal command centre in Tivoli would still be there; dangerous dons would be on the streets, rather than in lock-up today or running scared, and the security forces might have not gone on to St Catherine where they have been overdue.

The polls are showing that Golding has lost significantly as a result of this issue. Nothing in the polls was surprising. But only political neophytes would write off Golding. He was invited to the G-8 where he talked proudly about his efforts to fight organised crime. The US is no longer angry with him. The Observer has eased the pressure on him and The Gleaner is giving him unequivocal support for his anti-crime initiatives, as is the Observer. That, perhaps, led the politically sensitive Golding to ignore the once-almighty human rights lobby in passing the anti-crime bills and extending the state of emergency.

The Jamaican dollar is strengthening, prices are falling, interest rate is at a 28-year low and we are set to pass the June IMF test. And, oh, crime is down significantly. A day is a long time in Jamaican politics. But the PNP leadership is too astute and strategically masterful to allow Golding any slack, so we are in for interesting times. But, unquestionably, Golding can rest a little better at nights, with Dudus, perhaps, sleepless in Manhattan.

Ian Boyne is a veteran journalist who may be reached at ianboynbe1@yahoo.com or columns@gleanerjm.com .