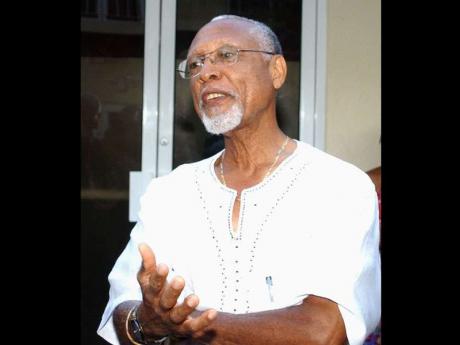 Professor Barry Chevannes continues to achieve distinctions, even in death. On Friday he became Jamaica's first declared and activist ex-communist to receive the Order of Jamaica, from no less a person than the leader of a party with which he did intense ideological battles in the 1970s. Such is life - and the twists and turns of history.

If you had been following the media since the passing of this major public intellectual figure two Fridays ago - and there has been extensive reporting and commentary - you would have no idea that Professor Barrington Chevannes was not just a member of the communist Workers Party of Jamaica (WPJ), but a leading figure in that party and a stout and relentless warrior against the Jamaica Labour Party, United States imperialism and capitalism. (Don't reporters do background reading for their stories - or do they simply rely on interviewees' memories?)

Not even his former party leader, Professor Trevor Munroe, host of 'Jamaica Speaks' on Newstalk 93, spoke about their association as fellow comrades in the struggle against "bourgeois democracy" and Eddie Seaga in the 1970s. He talked about St. Georges, that great Catholic institution; Barry's role as best man at his wedding and their being university colleagues, but no speaking on what is now "The Forgotten 70s".

Is it some scandal to have been a communist? I remember the days among a certain section of the intelligentsia when it was a scandal not to be! How could I forget the 1970s? It was the awakening of my intellectual passion, my coming of age philosophically. I was totally immersed in the debates, the dialogue, the controversies, the incessant fora on this or that political or economic issue. So I remember Barry Chevannes and his radicalism very well. I used to keep my old issues of the WPJ newspaper Struggle and the journal Socialism where the theoretical ideas would be discussed.

Barry was central to those debates and to that whole struggle. He was a strict, doctrinaire Marxist-Leninist. I remember talking to Rex Nettleford about Barry in the 1970s and Rex, who had "a lot of time for Barry", used to quip that, "Barry simply exchanged the authoritarianism of the Jesuits for that of the Kremlin".

Rex was at the time under much fire from the Marxists at the University of the West Indies (UWI) for paying so much attention to these "unscientific" ideas of race, cultural identity and issues of "bourgeois cultural nationalism", rather than the class struggle. But among those rabid fellows of the WPJ, Rex would always single out Rupert Lewis and Barry Chevannes for their knowledge of cultural issues. I remember Rex's publishing of a very fine analysis by Barry in his Caribbean Quarterly, on revivalism and Afro-Caribbean religions.

In that piece, Barry quoted the well-known paragraph from Marx about religion being the opium of the people, but went on to quote the section not usually quoted, which is that while religion was a cry of the oppressed it also represented a "protest against real distress".

Barry saw early, even through his murky Marxist lens, that race and culture were paradigms that could not be completely ignored in the Caribbean. But, as a historical materialist, he was forced to give primacy to what Marxists call the base and not the superstructure of ideas.

In his 2006 collection of essays put out by Ian Randle Publishers, Betwixt and Between, Chevannes downplays Marxist deterministic analyses of race and culture, allowing sort of shame-facedly that, "these differences (which) also paralleled class differentiation of the social order, allowed some to offer a short-lived Marxist paradigm." You would never have known from reading that collection that Barry himself was a prominent member of that 'some'!

He continues in his critique of his own past by saying that the Marxist paradigm reduced "cultural differences to differences of class", explained social differentiation as an inherent feature of class-divided society and social integration, wherever it existed, as based on hegemonic control. The failure of Marxist praxis to achieve working class hegemony in the Caribbean was quickly followed by the demise of Marxism as an explanatory tool."

And Rex would have been totally delighted with this sentence - evidence that the conversion was complete: "It (Marxism) has been weak on the cultural question and was never at home with the culture of the folk, African or Indian". And Rex could have told Barry, Rupert, Trevor, Don (Robotham), Anthony (Harriott), Clinton (Hutton), the late Derek Gordon and the other Marxists that it would not hold together without that. Seaga could have told them, too, but he was persona non grata among the Left in the 1970s.

But those were the Cold War days and this is the 21st century. The world has experienced an ideological sea change.

So Barry can receive his Order of Jamaica and everyone can forget about his communist past. But Barry had nothing to be ashamed of. You see, his life has really been one continuum. It has been a life dedicated to justice and social action; a life committed to those on the margins, a life determined to make a difference and to stand with history's underclasses. What led Barry to join the Jesuits and not some other order of the Roman Catholic Church was precisely the activist, restless social activism of that order of the religious. Barry might have ditched his theistic beliefs and abandoned the supernatural deity, but he never abandoned that mission which led him to Boston to study with the Jesuits.

part of the dialectic

Marxism was part of the journey - part of the dialectic. Barry would later come to a détente with "contradictions" - a favourite word of his mentor and friend, Rex Nettleford. He was to make his peace with ambiguity, open-endedness, even uncertainty - things which were anathema to the orthodox Marxist mind, (though not to the more humanistic Frankfurt School of Marxism). Betwixt and Between shows a more textured, nuanced post-Marxist Barry, one who had thrown off the naive scientistic and realist epistemology of orthodox Marxism.

I think he came to appreciate Nettleford more in his post-Marxist years than he did before. It was not difficult for him to find coherence with Rex's ideas: for they were always lodged deep in his heart and psyche ; only obscured and suppressed by his rigid Marxist theology.

Barry moved from embracing grand meta-narratives, a totalist ideology and utopian ideas of revolutionary justice, to settling for less grandiose goals. Like helping fathers to be better fathers, hence his founding of Fathers Incorporated. He worked with the Violence Prevention Alliance, the Peace Management Initiative and chaired a ganja commission to 'give a bligh' to youths who were criminalised for smoking a spliff. He worked on justice reform under Portia Simpson Miller and helped to organise no-violence days. He also sought to help inner-city people near his environs at the UWI.

Friends say in recent times he was depressed over the failure of the political project and was very disillusioned with how politicians had used power. But Barry never allowed harsh realities to drive him into abject pessimism. He was never immobilised. In his well-written Betwixt and Between he talks about our people not taking responsibility and feeling that things happen to them rather than their having control over things. Barry never succumbed to that.

The ancient Greeks said that even when the gods had condemned you to failure you must still press forward gallantly. It's the old myth of Sisyphus: the man rolling the stone up the hill, only to have it roil back ceaselessly. But, in that he continues to push it up, he is a master of his fate.

Barry was a good human being. Listen to how people talk about him. Read the touching tributes to him. He was a compassionate dean. Many are the stories of his generosity and goodwill.

It is not just that he was a very engaging intellectual why he is so eulogised. It is because he was a very fine human being, a person of deep compassion, caring, love and gentleness. Barry was a deeply philosophical and reflective man. But he combined that reflection with praxis. You should read that very moving and literary masterpiece he delivered to the Rhodes Trust in Britain, which paid tribute to Rex in April.

In that tribute he talked about "cooperation - the willingness to trust and yield to one another those aspects of ourselves that we love to cling to, but which in so doing we keep ourselves insular and vulnerable".

There are many life lessons from Barry. He taught us the things that really matter in life. It's not the intellectual achievements, the status, the material accomplish-ments, the accolades one receives. It is the love one shows, the number of lives we touch. It is not about how much we get, but how much we give. It is not about self-aggrandizement but self-emptying. Barry incarnated all those values taught to him at St Georges and at Boston, studying with the Jesuits. He incarnated the best in his own people, for he drank deep from their culture.

Whether it was revivalism or Rastafari or any of the other Afro-Caribbean religious forms, Barry picked the best from them and weaved a tapestry that shone so beautifully.

I end with the way he ended his brilliant tribute to our premier intellectual, Rex Nettleford : "You were too late, Death. Life you can take, but the word once spoken belongs not to you but to us, the Living. Listen. You can hear it reverberating in the walls of the university - in cultural studies - in the liberated strides of his negritude, echoing, echoing across the islands, across the Diaspora, echoing, echoing, echoing until it can become flesh again".