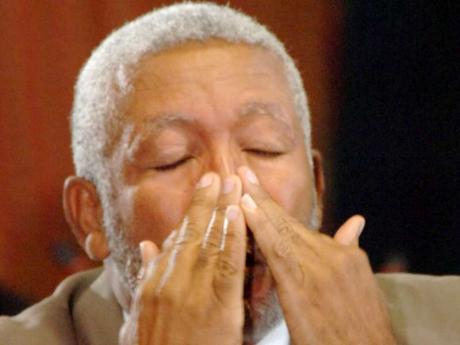 Enquiry, shamquiry. That was pretty much the initial attitude of the general public towards the ongoing Manatt-Dudus commission. Not only have we grown accustomed to enquiries costing taxpayers lots of money and producing nothing of value, but the relentless press coverage of the Manatt saga over the past year left most people utterly sick of the topic.

The early stumblings suggested a grand 'business-as-usual' waste of time. But the fitful stops and starts began to curiously coalesce into rather interesting courtroom theatre, and what started out as a tedious joke is becoming a pretty good advertisement for Jamaican democracy. Chairman Emile George left the gates a bit hesitantly, but has settled into a firm non-partisan stride, quickly quashing the constant efforts to politicise the proceedings.

While most people are still not paying much attention, public interest appears to be growing as it goes along. The sensationalist 'He lied! She lied' headlines may actually help in this regard, since there's nothing that Jamaicans love as much as 'cass-cass'.

Chief among the enquiry's pleasures has been the gratifying sight of often-arrogant politicians being forced to humble themselves before representatives of our Constitution. Not a few Jamaicans relished the spectacle of the sometimes perceived as cocksure Minister of Information Daryl Vaz meekly answering, "Yes, sir, no, sir" under cross-examination. While one of the more humorous moments was former Police Commissioner Hardley Lewin trumpeting his "vast experience of 36 years" one minute, and the next humbly declaring himself but a "simple sailor" not qualified to pronounce judgement on complex matters.

It must be good for all Jamaicans to see that though we elect and appoint officials to govern us, they themselves are subject to the rule of law and must prostrate themselves before its representatives. Not perhaps since the 1970s has our elected leader been subjected to an enquiry, and it should be a fascinating sight to see Prime Minister Bruce Golding being grilled by our queen's counsels.

If nothing else, this commission is giving spectators a crash course in legal education, and Jamaica can certainly be proud of the quality of our attorneys. Messrs Small, Phipps, Knight, Barnett et al are giving us a fine lawyerly show. Nor have they been shy to put their learned egos on display, though some have rudely left their manners at home. Our other celebrity Shylocks not included in the proceedings are, no doubt, gnashing their teeth in frustration at missing out on this unprecedentedly glorious judicial moment in the public sun.

Many, and perhaps most, are viewing the proceedings through green or orange lenses. But Jamaica Labour Party (JLP) leader Bruce Golding's choice of former People's National Party Finance Minister Hugh Small as his attorney was not only clever strategy, it represents a much-needed crack of light in the darkly tribalistic nature of our body politic.

One disappointing note has been the rather poor press coverage. Those watching the proceedings live often have great difficulty matching up what is seen and heard with what appears in our national papers. Worst of all are the headlines putting never-spoken words like 'fairy tale' into the mouths of testifiers. In addition, The Gleaner has hardly made mention of the 'missing' and 'secret' memorandum of understanding (MOUs) which have received extensive coverage in other media.

To anyone living abroad trying to find out what is really happening in this enquiry - and that includes maybe hundreds of thousands of expatriate Jamaicans - our newspapers have often been worse than useless. In former days, newspaper coverage of such nationally important matters would include relevant quotes of what was actually said, so readers could come to their own conclusions. What we are getting now is often inaccurate personal opinions.

Yes, we now have live radio and television coverage, but the public should still be able to scrutinise critical testimony in print, so we can try to pick logical sense from often grandiosely stated nonsense.

If future historians cannot recreate what actually took place from the reports in Jamaica's newspaper of record, how can the 177-year-old lady of North Street be said to be doing her job?

Now it's always dangerous to draw premature conclusions from legal proceedings until all testimony has been given and all cross-examination completed. No jury ever passes judgement until both prosecution and defence have been fully heard. Only irresponsible, publicity-seeking grandstanders could be calling for resignations before everyone has a chance to tell their side of the story.

The 'missing' and 'secret' MOUs seem to have played a great part in the divergence of opinion that led to the legal impasse between Jamaica and the United States over the extradition of Christopher 'Dudus' Coke. It's up to our qualified legal minds to tease out their full implications, but it is certainly amazing that it was not until the Americans mentioned the said MOUs that this administration knew about them. Even more astonishingly, they were not signed off by Cabinet, and it took months for them to be physically located. How many other such yawning gaps are there in our system of governance?

As this is written, the truly big guns such as Dorothy Lightbourne, Dwight Nelson, Peter Phillips and Bruce Golding have yet to be heard. The most significant testimony, so far, has probably come from Solicitor General Douglas Leys, who gave a brisk, no-nonsense account of his knowledge and actions. Some of what he said did not totally accord with previous utterances of Ms Lightbourne and Mr Golding, and the public awaits their reply.

Unless Mr Leys is lying through his teeth under oath - and it's hard to imagine what his motive would be for committing perjury as this would destroy his career, if found out - it seems there were strong legal reasons for the positions the Jamaican Government took. Mr Leys not only laid out reasonable arguments, but named many eminent legal minds who, when consulted, agreed with the stance he took.

It would also appear that, by Mr Leys' account of his actions and what he claimed to know at the time, Manatt, Phillips & Phelps did no official work for the Jamaican Government, and those eyebrow-raising meetings and invitation lists and emails had innocent, if complicated, explanations. Obviously though, Harold Brady has a lot of questions to answer.

So assuming that Mr Leys' account holds up under cross-examination - and it has at the time this was written - there does not seem to have been any grand governmental conspiracy to illegally block the extradition request for Christopher 'Dudus' Coke.

Not that this lets Bruce Golding off the hook. In the end, this whole enquiry is really about his words and actions concerning the entire affair, and it is his testimony that the public is really waiting to hear. From my point of view, there are four central issues the prime minister will have to satisfactorily address.

1. What was the logic of a political party - namely the JLP - getting involved in a national matter?

2. The extradition request was received August 26, 2010. We now know the discussion to approach a lobby firm - which ultimately turned out to be Manatt - took place on September 6. Mr Golding has previously said that he sanctioned this initiative to either 'resolve what was seen as a treaty dispute' (May 11, 2010) or 'avoid a stalemate' (September 12, 2010) between the US and Jamaica. But how could a dispute or stalemate have developed in less than two weeks?

3. Mr Golding has repeatedly said he did nothing immoral or illegal, so what was he apologising for in his national broadcast of May 17, 2010?

4. Mr Golding adamantly asserted before May 17, 2010 that, given the known evidence at hand, it would have been illegal, under Jamaica's Constitution, for Mr Coke's extradition order to be signed. So how come it suddenly became all right to do so?