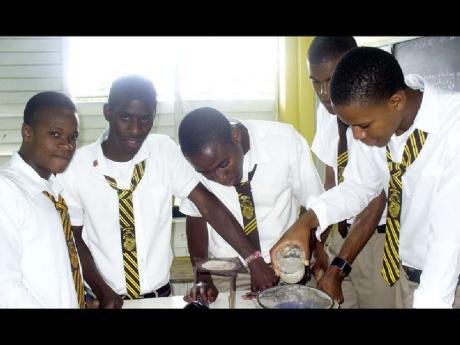 These students show the first phase of using fish scales to make plastic (inset) and glue in the science laboratory at Spaldings High School. The five boys, who said they accidentally stumbled upon the formula for making plastic from the scales, are now trying to get the patent for their discovery. 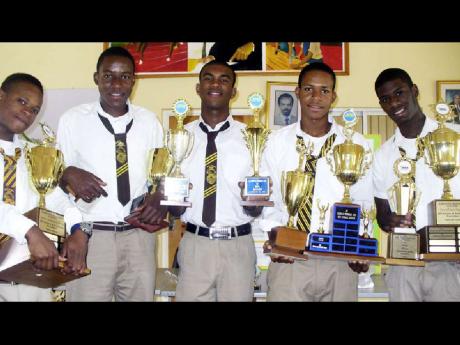 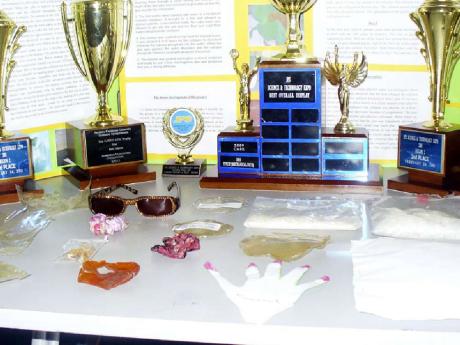 Some of the products they have made from fish-scale plastic.
1
2
3

FIVE YOUNG men from rural Jamaica are undertaking a project that they feel will not only bring them wealth, but would also be good for the environment.

The boys say they were on a field trip to Alligator Pond in southern Manchester when they saw the shores of the fishing village covered with fish scales. This, they said, was shocking, so they decided they would take some with them.

On their way to school, the five boys said they began to think about what they could use the fish scales to do. They came up with the idea that it could be a good source for glue because of the collagen found in it.

When they arrived at the school, they began the process of getting glue from the scales - something the boys said is not new. But how did they get the idea for making plastics, plastics of all shapes, sizes and consistencies from these fish scales? By accident!

"We were trying to get the glue from the scales, so we did a particular procedure and left the glue in the lab at school. When we came back from the weekend, we saw the fish scales we had put through the process turned to plastic," related Dourane.

The young scientists say they never expected to find plastic and never imagined this could have been done. So, they repeated the process and realised that plastic could, in fact, come from fish scales. So with their imagination and more fish scales at hand, they decided to start experimenting even more to see how far they could go with developing plastic (a product that is crucial to modern living) from something that people discard almost on a daily basis across the country without thinking twice.

The boys, who are not too keen on speaking about the process used to develop the scales, as they are seeking to get the invention patented, said the plastic they discovered is far more environmentally friendly than the ones we currently use.

"The plastic we make is biodegradable, and it will decrease each time water touches it, plus it's not easily burned and gives off less smoke when compared to the plastics that currently exist, which are made from chemicals," noted Oraine.

The boys said the plastic they created is chemical-free. They told The Gleaner that by simply adding water to the scales, they can make plastics that are extremely durable and perform just as well as - and sometimes better than - plastics on the market.

"There are several things we can use this plastic to make - from accessories such as earrings, bracelets to plastic plates, cups and other utensils, to mannequins, to even the lens of glasses. Anything plastic, fish scales can be developed into making that," stated Rajae.

They said they have done extensive research to see if there is anyone else in the world making plastic from fish scales, but they have not been able to find any such person. However, they believe even if that person or company is out there, the process used would be entirely different from theirs, as their process is all natural and unaided by chemicals or machinery.

They say, in addition to the plastic that they accidentally discovered, they still make the glue from the scales which, according to them, is colourless, non-toxic, environmentally friendly and can be used in offices and schools.

These young men say they are looking to take the idea beyond Jamaica and make a business of their discovery as they strongly believe the world needs this sort of plastic that could be further developed to make countless other items.

But, for now, their aim is to go to the international round of the science expo and take home the title. However, they said the major challenge they are currently experiencing is that they do not have the right moulds to create the different objects they believe can be made from the plastic.

They believe the plastic can also be used to make chairs and even cellphone cases if they can access these moulds to create the right shapes.

In the meantime, as they prepare for the international stage of the competition, they are also working to get the patent and officially begin the process of establishing their business.