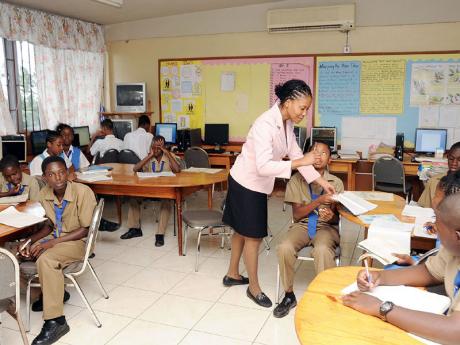 A teacher at Guy's Hill High School conducts a lesson with her students in March 2010. - File

Indeed, the campaign waged by Ralph Thompson and Dennis Minott, supported by the National Council on Education, influenced the society and the political leadership to transform the education system to one that offered quality to all. The bipartisan resolution passed in Parliament, spearheaded by then Prime Minister P.J. Patterson and former Prime Minister Edward Seaga, gave birth to the Task Force on Education 2004, chaired by Dr Rae Davis.

The state of education in Jamaica was not unique; it was very similar to that of postcolonial societies. It was part of our colonial legacy that we adopted an elitist education system and one that was geared to manpower planning - predetermining the training needs of the society rather than seeking to unearth the potential of all Jamaican citizens through education. Limiting the number of persons to be trained as lawyers, doctors, technicians and other professionals was a very short-sighted view of human-resource development.

I read with interest a recent publication by the University of the West Indies, written by the registrar of CXC, Dr Didacus Jules, where he highlighted the evolution of the Caribbean secondary education system since independence. The English-speaking Caribbean, he noted, has still not achieved universal secondary education in 2011. We in Jamaica, like the rest of the Caribbean, average now at 82 per cent access, and about seven per cent of our population gaining tertiary certification compared to 35 per cent for Latin America and 70 per cent for OECD countries. We still have a long way to go. While the CAP programme is a novel idea, we still have to work to get all our students in secondary school to age 18 by providing universal access to secondary education.

At Independence in 1962, Jamaican policymakers clearly had no vision to educate all our people. It was clear that we perpetuated the stratification of education which has only served to stymie our progress in this 21st century of the knowledge revolution.

The Task Force Report on Education 2004 gave bold and comprehensive analysis of policy errors of the past and prescriptions to fix the problem. There was a price tag of an incremental 70 per cent more to be spent fund education transformation, that is $20 billion more annually.

Equally, there was the call to fix early-childhood education and ensure that all our children have a solid start. We have seen the establishment of the Early Childhood Commission and much progress has been made in raising standards and output. This is leading to improved quality of students going into the primary sector, and with the emphasis on early detection and intervention before grade four, we are already seeing improved results from the system.

The Literacy Transition Policy further highlights the emphasis on literacy. By doing this, the entire society is forced to work to achieve the objective of universal literacy at grade four by 2015. As educators we know too well 'whatever the mind can conceive, it can achieve'. We as Jamaicans, proud and free, can achieve what we put our hands and hearts into. But Jamaica, over the years beset by tribal politics, could not get a bipartisan approach to education that would seek to make Jamaica our first priority and not party power.

It is quite clear that the continuity of the education transformation project by Minister Holness has been good for education and good for Jamaica.

The National Education Inspectorate (NEI) and the Jamaica Teaching Council (JTC) are also two critical agencies recommended by the Task Force Report to manage the quality of the education system. I can also see that some of my colleagues from the JTA tend to overreact when new systems are put in place. It is natural to resist change, but I equally feel, based on our own consultations across the island, that all stakeholders, including our teachers, want the best for education and our children. We must not for one moment retreat from high standards of performance and accountability. I feel strongly, like the task force, that licensing of teachers is critical to enhancing the accountability of teachers as professionals.

I recall that when I was JTA president, I called on then Mr Patterson to provide a revolving-loan fund of $500 million to aid teachers in improving their professional competence, as we indicated then our commitment to licensing and professional development. We received then an instant approval from Mr Patterson. Teachers also benefit from generous study-leave facilities and 50 per cent refund for tuition for studies done without taking leave.

While I am cognisant of the resource constraint, we are seeing more and more that Government will not be able to fund this transformation alone, particularly since the great recession of 2008. It has been demonstrated at Jamaica College that we can rally stakeholders to invest in education and transform our schools one by one. The Jamaica College story is a model for transformation. The National Education Trust (NET) is also a good initiative to help raise funds for education transformation. We need to tap into the diaspora and the private sector to help fund this project.

I know that many stakeholders, like me, would love to see us pull the proceeds of the education tax of some $9 billion annually to be placed in this dedicated trust fund- NET to help the transformation of the education system. But until then, we have to insist that our Government lead us on a path to achieve economic growth and development so that we can find the resources necessary to fund, in a sustainable way, quality education for our Jamaican people. We still need 100 new schools to be built in the next 10 years to better cater to our children.

As I have said in the consultations led by the NCE, we must ensure that education does not again become a political football. As we seek to celebrate our first 50 years of Independence next year, we must ensure that all governments of the future are committed to vision 2030 and ensuring that we become a developed country.

If this bipartisan success can be replicated in other areas of national endeavour, such as crime and energy solutions, we will see Jamaica truly achieve its potential. Our mantra of the future must be Jamaica first. When the majority of our people feel that we would have been better off remaining under colonial rule, it tells us that not only do we need education transformation but transformation of our political culture. I now call on us as well-thinking Jamaicans, educators and the Church to lead the way in this renewal.

Ruel Reid is chairman of National Council on Education. Email feedback to columns@gleanerjm.com and rreid@jc.edu.jm.