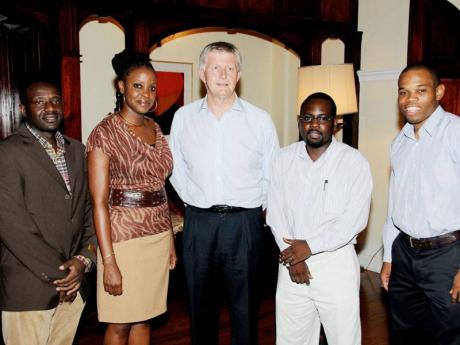 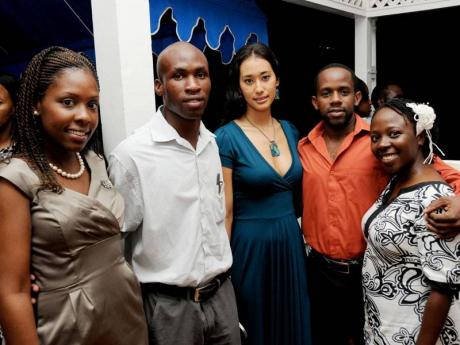 It was a scholastic evening all around as Commonwealth scholarship hopeful Dacia Leslie (left) links up with scholarship winners (from second left) Keniel Roberts, Danielle Chai, Haile Dennis and Nadine Muschette. - photos by Winston Sill/Freelance Photographer 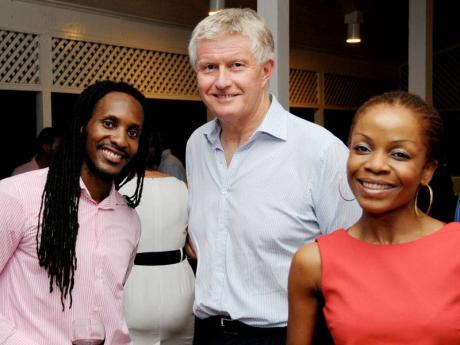 If ever there was a 'meeting of the minds', this was it. The latest recipients of the prestigious Chevening Scholarships were fêted on Wednesday by British High Commissioner Howard Drake at his residence on Trafalgar Road. His usual comedic banter in full swing, Drake quipped that with so many scholars in the gathering, "the IQ in this building has gone up considerably." He lauded the scholarships as the best grad-studies programme in the world, citing the various fields students choose, the networks they build and the contributions they make afterwards.

The Chevening Scholarship is funded by the United Kingdom's Foreign and Commonwealth Office and are named after Chevening House in Kent, the official country residence of the UK Foreign Secretary. Established in 1983, the scholarships have been offered in over 130 countries, enabling talented graduates and young professionals to study their chosen subject while developing strong links with the UK and each other. Since the 1990s, over 150 Jamaicans have benefited from scholarships.