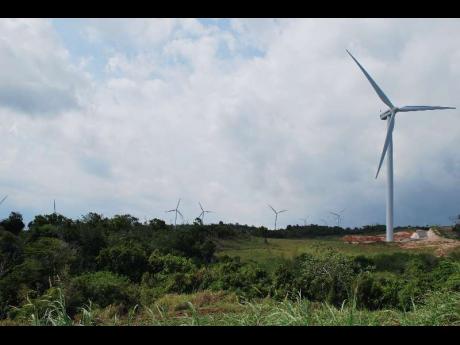 A view of the Wigton Windfarm in Manchester. - File 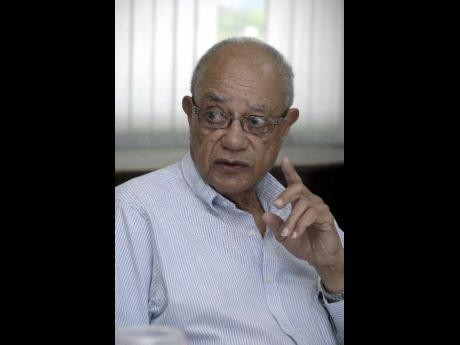 Winston C. Hay, Guest ColumnistGoing forward, Government has identified liquefied natural gas (LNG) as the preferred substitute for oil as the primary fuel for generating electricity, but expectations that this will substantially reduce fuel costs may be misguided. In the meantime, consumers can take conservation measures to lower their electricity bills.
Perhaps the most frequent complaint regarding electricity is the high cost to households and businesses. This is frequently attributed to inefficiencies in the operations of the Jamaica Public Service Company (JPS) or the greed of the company’s owners for unduly high returns on their investment. Electricity consumers have a right to know what opportunities exist by which electricity prices can be reduced.

Review of the company’s financial reports for 2009, the latest year for which audited financial reports are currently available, indicate that in round numbers, the utility’s operating revenues amounted to US$794 million, while income from other sources totalled US$17 million for a total of US$811 million.

In 2009, fuel costs alone represented approximately 61 per cent of JPS’s overall expenses, almost four times higher than the percentage contribution of the next highest expense category. Fuel costs alone (not fuel and IPP charges) represent about 50 per cent of the typical residential bill. Obviously, reduction of fuel costs must receive primary focus to reduce the cost of electricity, as well as to improve the competitiveness of Jamaican businesses.

High fuel costs are influenced by a number of factors, the most important of which is the price of oil. A secondary but important factor is the inefficiency with which fuel is converted to electricity in most of the generators supplying the national grid. This is because of a high percentage of JPS electricity being generated by old inefficient steam turbines burning heavy oil, and, to a lesser extent, by gas-turbine units fuelled by expensive automotive diesel oil.

However, JPS is aware of the need for more fuel-efficient generating units. Since the 1980s, the utility has developed detailed plans for installation of modern power stations burning the much cheaper coal as fuel. But, in each instance, the Government has instructed JPS not to proceed with its coal-fired generation plans.

In the 1980s, JPS being state-owned, the Government decided to invite private-enterprise proposals for new generating facilities, restricting the technology choice to diesel-powered generators burning heavy oil. That process led to the installation of the first IPP units, but did not deliver the anticipated reduction in generation expenses.

In the 1990s, JPS resuscitated plans for coal-burning generating units, but was not allowed to proceed because the Government decided to source natural gas from Trinidad at prices low enough to allow electricity to be generated at lower costs than would be possible if coal were to be the fuel.

Natural gas would be a preferred fuel if it were delivered at a price competitive with that of coal: its adverse environmental impact would be lower; the investment in generating plant would be lower; operating and maintenance costs would also be lower; and fuel efficiency would be higher.

The problem is that natural gas must first be taken from its source, liquefied by being supercooled to a temperature of -260 degrees Fahrenheit, transported by specialised ocean vessels to Jamaica as LNG, then regasified and pumped from the regasification terminal to the point of usage.

However, JPS’s calculations, and those undertaken by competent independent agencies, indicate that the price of the natural gas delivered to the power stations would be so high that the cost of electricity would be higher than that achieved using coal. Consequently, Jamaicans expecting substantially lower fuel costs by way of LNG may be misguided.

The Government maintains that it will be able to source gas at prices which will enable the cost of electricity to the consumer to be reduced by 30 per cent or more. However, the intended source of gas and its projected cost delivered to the power stations have been kept confidential.

Government’s revelation of its expected LNG source and the cost to the delivery point are crucial if it is to put to rest doubt among experts and key stakeholders regarding the soundness of its LNG-centred generation plan.

The Government decided that JPS is to retire all of its current steam generating units by 2014, and replaced by 480 megawatts of gas-fueled combined-cycle plant. The Government is to award a contract for installation and operation of a floating regasification and storage unit (FRSU) which would accept the LNG, regasify, store and supply the gas to the power stations.

Plans for conversion to gas-fuelled generation are behind schedule. Earlier in 2011, competitive bids were invited internationally for installation of 480MW of gas-fuelled combined-cycle generating units, but only one proposal was received, submitted by JPS.
The first unit is projected to be functional in 2014, but there are potential pitfalls. It is uncertain whether the Government’s price projections will be realised, in view of the rapidly increasing demand for LNG internationally. Although an order has been placed for construction and operation of the FRSU, the award is being disputed.

If JPS should proceed with installation of the combined-cycle units as planned, and natural gas prices prove to be well above projected levels, the only alternative fuel for the newly installed generators would be diesel oil. This would bring closure to hopes of lower electricity prices, as the cost of diesel for generation would exceed the current 61 per cent share of fuel in JPS’s total costs.

Fuel pricing is not the only area in which JPS has significant opportunities for cost reduction. Current loss levels, measured as the difference between energy which is fed into the grid and that for which bills are issued, are unacceptably high. Currently, energy sales are about 78 per cent of the energy supplied to the grid, corresponding to overall losses of 22 per cent. Loss levels have been as high as 27 per cent, but are being slowly reduced. Each percentage reduction in losses becomes more difficult to achieve as overall losses fall.

JPS intends to reduce total losses by about one per cent per year for the next five years. Since the principal effect of losses on costs is the cost of the fuel consumed in generating the energy that gets ‘lost’, the current high fuel costs place special importance on lowering the level of losses. It is estimated that at current fuel prices, reducing electricity losses by five percentage points would reduce tariffs by one US cent per kilowatt-hour.

Electricity from renewable energy is often considered to offer potential for lower electricity prices. Currently, wind and water do provide some power to the grid, (nationally, a maximum of about 32MW and 23MW, respectively), which capacity, although low in terms of the overall maximum demand on the JPS grid (more than 650 MW), does contribute to reducing fuel costs.

Solar power is unlikely to become economic for grid supplies in the near future, despite the intensive research being undertaken internationally.

Power from bagasse from the sugar industry may have some impact on national electricity supplies in the future, but initial indications are it is unlikely to reduce the overall cost of electricity to the grid.

A specific limitation of most sources of renewable energy for electricity supplies is that they are unable to guarantee power availability on a 24-hour basis. Wind cannot be summoned on demand, the sun does not shine at nights, and bagasse is readily available only during the cane-grinding season.

The promotion of a cleaner environment and the use of indigenous energy sources provide reasonable grounds for incentives to encourage the use of renewable energy. However, it should be understood that renewable energy is not likely to result in lower electricity rates.

It should not be overlooked that consumers can play important roles in reducing their electricity bill. Consumers must evaluate opportunities by which average monthly consumption can be reduced without undue reduction of comfort or production – such as in-line water heaters and more efficient refrigerators; application of ‘Time of Use’ tariffs to commercial and industrial operations, and more efficient air-conditioning systems in enterprises.

The Petroleum Corporation of Jamaica recently reduced the average electricity bill for its head office by 50 per cent after re-evaluation and modification of the air-conditioning system. Electricity prices in the Caribbean as a whole, with the notable exception of Trinidad, are increasing sharply, and the consumer must undertake efforts to reduce the impact on his/her pocket.
* Winston C. Hay, a former managing director of JPS, is an energy consultant. This column is reprinted from the MSB Business Review. Email feedback to columns@gleanerjm.com.