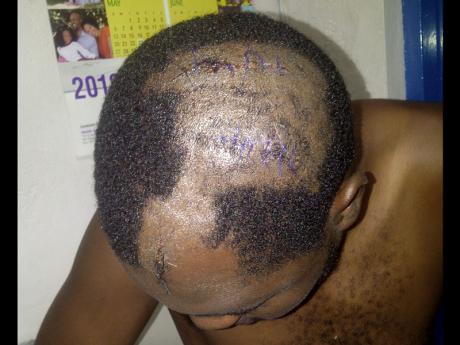 In an exclusive interview, Dr Jephthah Ford told The Sunday Gleaner yesterday that Coke was almost killed in the incident.

"He only survived because he pretended to be dead," the doctor asserted.

Livity is charged with shooting with intent and illegal possession of firearm and has been in custody since July 2010.

It is being alleged that the charges stemmed from the unrest in west Kingston in May 2010.

The Crown is alleging that the accused Livity fired at police and soldiers when his brother, Dudus, was being sought by the police.

"I am going to issue a police certificate in terms of his injuries because it is a police matter," said a strident Ford.

Ford pointed out that Livity told him that before the men started to beat him, they said they received orders to take him out because the People's National Party (PNP) was now in power. It is a claim that Ford, a former PNP caretaker, said is the furthest thing from the truth.

"This story has a potential to do damage to the country; it does. The PNP has to make it absolutely clear that we did not give any instructions for Livity Coke to be killed," said a strident Ford.

Yesterday, Lieutenant Colonel Sean Prendergast, commissioner of corrections, confirmed that there was a violent incident involving Livity at Horizon, but said the information he received labelled the inmate as the aggressor.

"From reports I have, he (Livity) initiated the confrontation with the soldiers and force had to be used to restrain him," the prison boss said.

Prendergast confirmed that Livity received "some lacerations that required stitches", but would not say where exactly on the anatomy he sustained the gashes.

"With any incident like this, Mr Coke is alleging that the soldiers injured him without any justification. The soldiers have a different account of the series of events," said Prendergast.

The prison boss denied that Livity was left to lie in his own blood after being beaten to a pulp by the soldiers. "That's not the case. He was taken to the sick bay. The doctor was already there treating other patients," he said.

Livity was being held at Security Post 11, which is manned by members of the military because it houses "high-risk inmates and remandees". Provisions under the Corrections Act allow the commissioner of corrections to classify persons as is necessary.

Not caught on camera

Security Post 11 has cameras at strategic locations to record the day-to-day activities. But there are blind spots that escape the lens of the security equipment. The incident involving Coke happened in one of these spots.

"Unfortunately, the confrontation occurred in the stairwell." the commissioner asserted.

He also revealed that the Ministry of National Security is investigating the matter and the public defender has visited the institution since the incident. He also said Livity has been interviewed by investigators from the Independent Commission of Investigations.

At the request of Livity's lawyers, sister and girlfriend, Ford said he visited with the accused gangster yesterday.

"He has a laceration to the back of his chest, on the left. It was eight centimetres long. He had multiple abrasions over the side of the ribs. He had multiple haematoma over the right side of his arm ... . His left knee was stiff, bruised, and there was blood in it."

Ford told The Sunday Gleaner that he will be briefing the prime minister, especially as there is fear that residents of Tivoli Gardens may become restive on account of the incident.