Of royalty and the Historic Falmouth Port 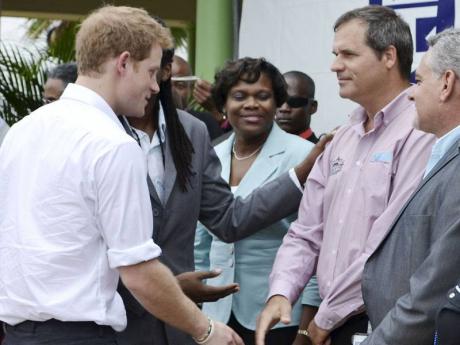 The Historic Port of Falmouth has come full circle, royally. Last Wednesday, Prince Henry of Wales (also known as Prince Harry) toured the award-winning facility as part of his four-day visit to Jamaica - celebrating his grandmother, The Queen's Diamond Jubilee.

Prince Harry visited the Georgian town, making a stop at the Port of Falmouth, four years after his father, Prince Charles, and the Duchess of Cornwall, Camilla, visited the facility during its development phase in March 2008.

On the port, the prince met with officials of the Port Authority of Jamaica (PAJ) and Royal Caribbean Cruise Lines (RCCL). During the tour, the prince expressed an interest in the economic impact of the port on the wider community. He made enquiries as to the number of passengers who walked the town as well as the dollar value spent by cruise passengers on the port.

William Tatham, vice-president - cruise shipping and marina operations, PAJ, said the visit by Prince Harry serves to reaffirm the port of Falmouth as a world-class cruise destination. He noted that the questions asked by Prince Harry indicate his assessment of the return on the investment made in developing the Falmouth port. All indications are that the Historic Port of Falmouth has a tremendous economic impact on tourism, and so he will have a favourable report for Prince Charles when he updates him on the activities on the pier since his visit.

"Falmouth is largely unknown for tourism and cruising, so this visit will augur well for the town, allowing us to reach a wider market," Tatham said.

His sentiments were echoed by Carl Hendriks, general manager - Falmouth Jamaica Land Company Limited, a subsidiary of RCCL. "The visit by Prince Harry will greatly impact visitors from the United Kingdom to Jamaica," Hendriks said. He noted that the timing of the royal visit was great for the port as it came just a couple weeks ahead of the first anniversary of the opening of the port. The Historic Port of Falmouth was officially opened on March 22 last year.

Prince Harry's visit to the town culminated with a tour of Water Square which was renovated by the PAJ to recapture the Georgian style of the town's rich history.

The port of Falmouth was built as a joint venture between the PAJ and RCCL. The facility's berths can accommodate the largest cruise ship in the world. It is the largest themed cruise port development in the history of the Caribbean, costing in excess of US$220 million.