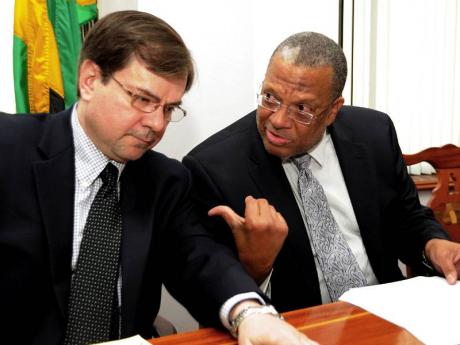 An International Monetary Fund (IMF) mission which on Wednesday concluded its article four consultation and initiated discussions on an economic support programme for Jamaica, has recommended that the government prioritise economic growth while reducing the high public debt and unemployment.

The mission, which was led by Luis Breuer, also pushed for progress on tax reform, but was silent on the public-sector wage bill.

The reduction of the public-sector wage bill as a percentage of GDP was one of the primary stipulations of the previous US$1.27-billion IMF standby agreement that stalled less than a year into the programme.

However, the size of the contraction of public-sector jobs - the previous administration had proposed 10,000 cuts - has been the subject of disagreement between the last and incumbent administration.

The IMF resident representative in Jamaica, Dr Gene Leon, and the Ministry of Finance did not respond to queries, by press time, as to whether the IMF still expects Jamaica to reduce its public-sector wage bill to nine per cent of GDP by 2016, or whether restating the measure of reduction will be or expected to be part of a renegotiated IMF agreement.

The IMF mission, which visited Jamaica during the period March 8-21, noted that real GDP grew by 1.5 per cent in 2011 after three consecutive years of negative growth. But, it argued that a significant challenge facing the country was the realisation of higher and sustainable rates of economic expansion, while reducing macroeconomic risks, including the high public debt, currently at just over J$1.6 trillion or 140 per cent of GDP, and high unemployment, now at 12.8 per cent.

Having met with Prime Minister Portia Simpson Miller, Dr Phillips and technocrats, the team and the Jamaican authorities agreed that engaging with those issues would require action on three fronts, developed within a medium-term framework of national priorities, according to a statement released by the IMF Thursday.

First is a growth-oriented environment aimed at improving productivity and competitiveness, while raising efficiency. This against the background that Jamaica ranked 107 among 142 countries globally in competitiveness, according to the Global Competitiveness Report 2011-12, released by the World Economic Forum last September.

The second includes the establishment of strong macroeconomic policies through significantly higher primary fiscal surpluses, which the IMF has projected to drop to three per cent of GDP for fiscal year 2011-12, compared with a budget target of 5.2 per cent.

It also requires fiscal and financial reforms, as well as further strengthening of financial sector regulation and supervision.

The third is a framework to ensure social cohesion. "In this regard," said the IMF statement, "prompt implementation of tax reform and improvements in tax administration will allow the Government to focus spending in priority areas while raising productivity."

A team from Jamaica is expected to continue discussions with the IMF between April 20 and 22 in Washington DC, even as the Government works on a programme of economic measures and reforms to address what the Fund describes as the tough challenges facing the country, and which it says call for prompt policy actions.

The IMF team, noting that recent macroeconomic developments have been mixed, estimated the public-sector deficit - where government spending exceeds taxes collected - to increase to 7.3 per cent of GDP for the current fiscal year, even as it pointed out that "the developments in public finances reflect both lower tax revenues and higher government expenditures in 2011."

In addition, the IMF said, delays in the implementation of the structural reform programme adversely affected fiscal performance. The programme include pension and tax reforms to which Jamaica made a commitment as part of the standby agreement.

The IMF said higher oil prices, among commodity import costs which pose risks to stability and growth, contributed to a projected increase in the external current account deficit to more than 10 per cent of GDP.