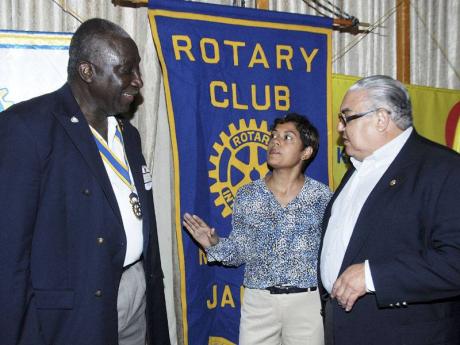 Deika Morrison discusses the concept of Crayons Count to Effiom Whyte (left), president of the Rotary Club of Kingston, and Robert MacMillan, honorary consul, Consulate of Iceland, during the club's weekly luncheon at The Jamaica Pegasus hotel in New Kingston yesterday. - Ian allen/Photographer

One hundred and sixty-two thousand children from 2,700 schools across the island will benefit from learning materials provided by Crayons Count, an early-childhood development project started by Deika Morrison and her Do Good Jamaica initiative.

Noting that too many young children in Jamaica have little or no access to the learning materials needed for their development, Morrison said this was why she has embarked on the project.

"I wrote a book and my publisher said to me that we are going to have to change this part of the book because a lot of children don't have crayons," Morrison told The Gleaner yesterday after addressing the Rotary Club of Kingston's weekly luncheon, held at The Jamaica Pegasus hotel in New Kingston.

"I said that is insane. What is a four-year-old doing without crayons. If the kids don't have proper learning materials, then what are we expecting," added Morrison, the co-founder and managing director at Mdk Advisory and Consulting Ltd.

Morrison began planning in November 2011 and by February 13, 2012, the early-childhood development project was under way with the support of The Gleaner and National Bakery, among other companies.

Also speaking with The Gleaner, Gary 'Butch' Hendrickson, chairman of National Bakery, added: "Enough is enough. We have to start looking after our children and take the pressure off the early-childhood system. If we don't do this, then the primary education comes under pressure."

National Bakery has provided $30 million worth of support - including storage, assembly and transport which includes a combination of branded trailers, trucks and cars. At least a dozen of these vehicles travel across Jamaica. National Bakery and The Gleaner have also come together to provide a full colouring page that comes in the newspaper every Saturday.