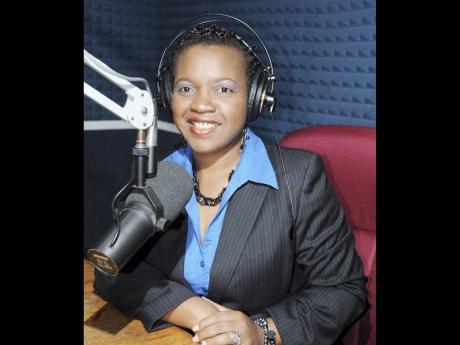 Althea McKenzie: I'm a work in progress. I think I'm just someone who is trying to make a difference. - Gladstone Taylor / Photographer

Althea McKenzie, already the busy bee around Power 106, can add another bit to her CV - full-time host of 'Independent Talk'.

It's nothing new to her though, as McKenzie has filled in on various shows on Power 106 since she joined in 1993.

"I think I'm the official stand-in because I've done every thing (show) here except 'Tell Me Pastor'," she laughed.

A media practitioner with more than 20 years' experience, McKenzie has served in several positions including news anchor, programme producer and outside broadcast presenter. But, media was not her original plan.

"I am a trained teacher. So fresh out of Bethlehem Teachers' College, I heard that there was an opening at KLAS Radio and that was in 1990. I went to do the interview about midday and I started working at 6 the same evening," the cheerful host related. She started as a sub-editor in the newsroom. Ironically, her first boss was Michael Anthony Cuffe, her colleague at Power 106.

"I tell people all the while that I still don't know what I want to become," she admitted.

"I'm a work in progress. I think I'm just someone who is trying to make a difference," said the Manchester High alumnus. She remembered what drew her to Power 106.

"I heard the station one day and I said, 'Wow, that station sounds good'. There was something about it that was special," she recalled. She started as a news editor making various stops in the newsroom and even serving at the management level.

"I was the first advertising and marketing manager for the station. When I went into administration after working in the newsroom, one of the things I wanted was to make it a little more interesting. So I started doing very simple things like adding a picture here and there to a proposal." She went to the Edna Manley College and did courses in computer graphics, complementing her new 'skill'.

"So after that, I started working on print ads for the station," she explained. Listeners will also know her as host of Power's gospel show, 'Power & Glory'.

"That's my baby," beamed the devout Christian, who explained that she saw the potential for a gospel show.

"It had to be something that I could be true to myself as an individual. But it took me a year before I approached Mr James (Newton James, managing director of Power 106) with the idea."

He loved it. McKenzie retains her duties as host of the four-and-a half-hour Sunday morning show.

"This was something that I created. In a lot of ways, it keeps me very centred and anchored. When I get behind that microphone on a Sunday morning, mi inna mi ackee! I almost literally become another person and that person is more me than anything else that I've ever done," she said.

She jokes that her entire life is tied up in Power 106, even freelancing while she did her first degree at UWI.

"They would still call upon me. It's just that the focus was different," she said. "Along the way, I have been producing features, voicing commercials, and I guess you could technically call me the duty announcer because I was the person who was always there, so if they needed a person to voice in an emergency, then I would be on hand to do it."

She used to produce Independent Talk for Thwaites, so she believes she has a good foundation with the show. Now that it's 'her' show, it's a new ball game.

"If you're taking over a programme from Ronnie Thwaites ... then you would be apprehensive. But it's apprehension, not fear!" she declared. McKenzie promised some minor tweaks to the show, the aim to make it more interactive. It's now on from 5 a.m. to 9 a.m. and will have an inspirational component. For the other stuff, you have to listen in starting today. Her work can mean long hours but she has a strong support base.

"I have a very supportive husband and daughter," she smiled. She has to cut back on some of her other duties at Power 106 now but is always willing to chip in. She is thinking of doing a master's in counselling psychology.

"It's more in line with who I am and what I'm trying to achieve with the show," she said. "This has to be a programme that reaches out to everyone, and if we're going to use education as a tool to move the country forward, that is how we have to look at it: teaching at all levels."

Admitting that Thwaites' departure and Wilmot 'Motty' Perkins' death will make Power's transition hard, McKenzie said it's challenges like these that test mettle. And Power 106 is built to last.

"In terms of getting information out there, we are the best, bar none. It's not about hype. It's about getting out information. That's what I want to bring to 'Independent Talk'."