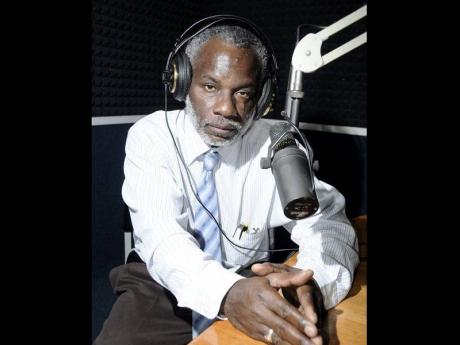 Ralston Hyman: You have some people who set out to make money, so they will do anything to get it. But if you do that, after a while you get watered down. - Gladstone Taylor/Photographer

No longer a three-day segment of 'Independent Talk', 'Real Business' will have its own time slot from 9 a.m. to 10 a.m. Monday to Friday starting today. Ralston Hyman continues as host. He said he has always had a love for economics.

"My personal goal is to leave a legacy as one of the greatest economists and business analysts internationally ... ever!" he said. "Economist Dr Michael Witter was one of his early influences, a connection they forged from Hyman's time as a Real Mona Football Club player, with Witter as the 'coach'.

"From that time Peter Moses (another inspiration) headed Citibank, and he was a man who was also big in football," Hyman said. Hyman played midfield, but football as a career was never really an option.

"Those times, football was just love. No money was in football at that time, so we just played for the love of it," he laughed. A Kingston College man, he recalled that Moses advised them not to depend on football. So Hyman studied at the University of the West Indies.

Many fellowships and scholarships have taken him around the world including to Germany, where he studied the workings of the European Single Market and Economy, as well as European equities, financial and commodities markets. He has also studied the nuances of the Japanese and Chinese markets and has interacted with many of the bigwigs of finance including Joe Stiglitz, former chief economist at the World Bank. He feels this has given him valuable insight into how investors think, making him confident in his projections.

To say he is decorated is an understatement. He is the recipient of several local and international journalism and broadcasting awards for business reporting and analysis, including the prestigious Theodore Sealy/Hector Bernard Award for news reporting in print journalism, Canute James Award for business and financial reporting, as well as analysis, and the Morris Cargill Award for opinion journalism and analysis. He was also the runner-up for Jamaica's Journalist of the Year Award in 2009. His awards from corporate Jamaica are simply too many to mention.

He started working with Power 106 in 2004 after another noted financial analyst Dennis Richards came up with the concept. 'Real Business' was an evening, rush-hour programme for about a year before switching to mornings.

"We had three segments. The Big Story, where we looked at the most important macroeconomic story for the week; the Business Information Update; then there is another segment we call Financial Microscope, looking at issues in finance. Then we have two market updates (one local, one international)," he explained. 'Real Business' provides timely economic and financial information affecting the investment decisions of listeners and Hyman is looking to take it to another level.

"We believe that the participation of everyone is important, so we are going to get corporate executives to come and co-host the show. We want to bring the wider corporate Jamaica into the process," he said. This enables them to bring their views to the show "so we can give a world perspective on things". It's not a call-in programme but Hyman is hopeful that might change, giving the 'average' man a voice. He said he wants to bring economics to a level "that even the baby can understand it".

Throughout his interview with The Gleaner, he kept one eye on the television, watching 'Surveillance Midday' on Bloomberg TV. The who's who of finance/business have appeared on it and that's where he would like to see 'Real Business'.

"We'd like to take this thing international. That is the type of international standard that we want to push the show to so we can compete at that level," he said.

He also said he wants an end to political bias

"One of the things that we want to use the show to do is influence policy change in the country. I'm just talking straight, we not going 'roun di ting'!"