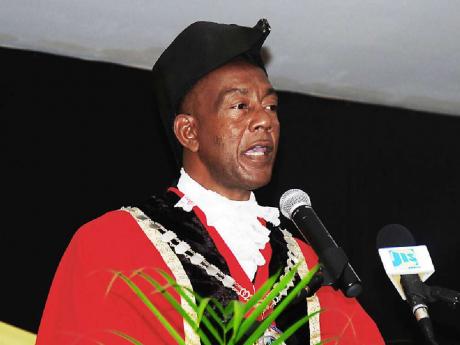 DECORATOR Denton Edwards has strongly refuted claims by Montego Bay Mayor Glendon Harris that he has accepted responsibility for the mounting 'flag controversy'.  Condemnation has come from several quarters in the wake of the unfolding flag debacle.

An attempt at a Jamaican flag without the green was used as a backdrop at a ceremony to swear in Harris at the Montego Bay Civic Centre.

In a prepared statement, which was released to the media yesterday, Edwards denied that a shortage of green cloth had caused him to leave green out of the backdrop he designed for the ceremony. According to him, he was prevented from completing the project.

Edwards said he was instructed by an official of the Office of the Prime Minister (OPM) Western to forgo the completion of the green in the interest of time. The decorator said he complied with the instruction.

"I wish to note that there was no shortage of green cloth to complete the task and I would have been able to complete the backdrop depicting the Jamaican flag if I was afforded the opportunity so to do."

Responding to the
allegations late yesterday, the OPM, in a release, said that the
official, Courtney Hume, was not employed to the OPM either in Kingston
or in Montego Bay. "In that regard, Mr Hume does not have any authority
to give instructions on behalf of the OPM," the release
stated.

According to the OPM, it had no knowledge of
or any part in the arrangements for the civic ceremony in Montego Bay
for the swearing in of the mayor and
councillors.

"Attempts to implicate the OPM in the
controversial removal of the colour green from the backdrop are
unfortunate," the release added. On Thursday, Mayor Harris told the St
James Parish Council that Edwards, who heads Eddies Fabric Work
& Décor, had run out of green material while preparing the
backdrop and that was the real reason for the controversial absence of
the colour green, which happens to be the primary colour of the
Opposition Jamaica Labour Party (JLP).

"The decorator
(Denton Edwards) has accepted the blame for what happened and has
promised to make a public statement accepting responsibility," Harris
told the council. "He has even agreed to refund the money ($30,000) that
he was paid for the function."

However, in his release, Edwards not only
denied accepting responsibility for the controversial backdrop, but also
denied that he had agreed to refund the money he had charged for the
function as a gesture of goodwill.

"As it relates to
published reports that I have committed to refund the contracted amount
of $30,000, I wish to hereby refute such claim as I am currently out of
pocket in terms of the cost of the project," said
Edwards.

In recent days, the ruling People's National
Party has come under stinging criticism from civil society and the
Opposition JLP, which have both raised questions as to whether there was
a deliberate attempt to politicise the
ceremony.

"I have had discussion with Mr Edwards,"
Thomas told The Gleaner prior to the release of
Edwards' statement. "Based on our discussions, he will be releasing a
statement on the issue."