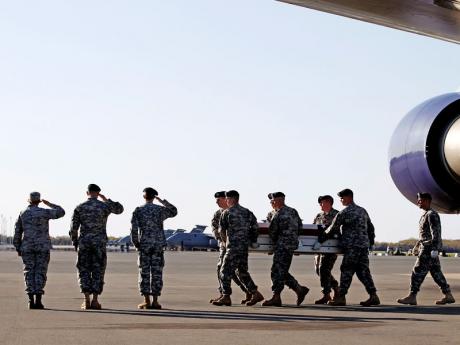 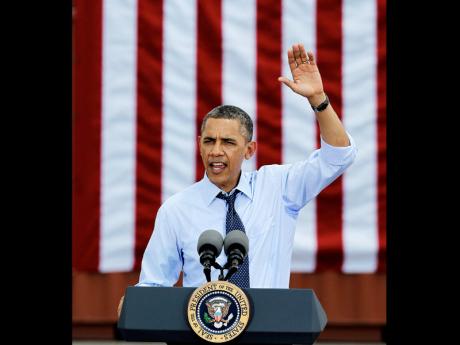 President Barack Obama waves after speaking at the Port of Tampa in Florida last Friday.
1
2

"There is no better recipe for Great-Power peace than certainty about who holds the upper hand."- Foreign-policy scholar Robert Kagan

As a progressive internationalist, I have been a fierce critic of American imperialism. That the United States is now the world's only superpower, and that it badly abused that status under George W. Bush to push a vulgar unilateralism, has deeply disturbed me and has always earned my ire. The abuse of American power, of course, long predates George W. Bush. In our own Latin American region, America has been overthrowing democratically elected governments from the 1950s (Guatemala) and has promoted dictators and despots the world over while pontificating about democratic ideals.

From its overthrow of Mosaddegh in Iran in 1953 (and the subsequent installation of Shah Reza Pahlavi) to its illegal war of choice in Iraq in 2003, the United States has given just cause to be very concerned about its preponderance of power in the international system.

But if there were no America, would the world unquestionably be a better place? If American military power had not been as overwhelming, would there have been greater peace and security and more liberation of the oppressed? And what is likely to happen if the United States loses power and cedes influence to China, India and Brazil? Will 'the rise of the rest' augur well for the world? Should we all be cheering that China is projected to overtake the US in gross domestic product by as early as 2020, or by 2027, according to Goldman Sachs?

A number of scholarly works by leading foreign-policy thinkers have recently rolled off the press, assessing precisely these major geopolitical issues and the overarching issue of the world after America's dominance. Primary among them are former national security adviser under Jimmy Carter, Professor Zbigniew Brzezinski's, Strategic Vision: America and the Crisis of Global Power (2012); Council on Foreign Relations senior fellow and Georgetown professor, Charles Kupchan's, No One's World: The West, the Rising West and the Coming Global Turn (2012); and Princeton's G. John Ikenberry's Liberal Leviathan: The Origins, Crisis and Transformation of American World Order (2011) and Brookings Institution's Robert Kagan's The World America Made.

Kagan's is the smallest of all these volumes (a mere 149 pages), but it is the most intellectually captivating and provocative, every page brimming with piquant insights. Kagan, now foreign-policy adviser to Mitt Romney, is the most brilliant and influential neoconservative alive, possessing an intellect that always threatens to dwarf even the best in his field. No foreign-policy scholar has had as much impact on international relations scholarship over the last decade as has Kagan. Ever since he published his now-famous 'Power and Weakness' essay in Policy Review in 2002, Robert Kagan has been unignorable. (The current issue of Policy Review is a special 10th anniversary edition dedicated to analysis of Kagan's original piece.)

Foreign Policy magazine reported online in January that President Obama was strongly influenced by a recent article by Kagan in the New Republic questioning American decline.

The New York Times did a review of his book in its February 13 issue under the title, 'Historian Who Influences Both Obama and Romney', but it did not do justice to the book. Kagan, in his slender volume, has anticipated progressives like me and has already made all the disarming concessions and admissions. Kagan is not your typical right-wing thinker who fetishises military power.

Kagan's thesis is simple: Without American military might, the liberal international order which we have would very likely not have evolved or been maintained. There is nothing inevitable about it. It's not a matter of technological determinism - the sheer breakneck speed of technological developments, with their sociological and political dynamics, would have created the world we have. And there is no Hegelian march of history towards progress and liberation. Our liberal international order is not here simply because mankind has a natural, irrepressible urge towards freedom, autonomy, human rights and peace.

"We like to think," says Kagan, "that the triumph of democracy is the triumph of an idea, and the victory of market capitalism is the victory of a better system, and that both are irreversible." But says the first-rate historian and foreign-policy scholar: "The better idea doesn't have to win just because it is a better idea. It requires great powers to champion it." The former Hoover scholar goes on: "The ancient democracies of Greece and the republics of Rome and Venice all fell to more powerful forces or through their own failings.

"The evolving liberal economic order of the late 19th and early 20th centuries collapsed in the 1920s and 1930s."

Kagan's point is that if America had not been as strong militarily and economically as it has been - primarily the former - we would not have the world we have, and peace in Europe would not have been maintained. My concern about the rise of an authoritarian and repressive power like China has been deepened by reading Kagan (not just this work, but especially The Return of History and the End of Dreams). I don't doubt for a moment China's "peaceful rise". I don't believe China has any intention of being an imperialist power. Henry Kissinger, in his recent tome, 'On China', demonstrates that. China does not seek monsters to destroy, to quote John Quincy Adams famously.

But its autocratic ideology and authoritarian culture which disregard human rights and liberal ideology will provide succour to illiberal and anti-democratic regimes. In other words, China will have no incentive to pressure countries which are violating human rights, drawing on its outdated Westphalian notions of sovereignty and non-interference in the internal affairs of a state.

If America were to decline, oppressed peoples wanting to rid themselves of oppressive governments would have a harder time. This is not to make any nonsensical argument about America being a benevolent hegemon, only interested in values, not its interests.
And Kagan shows that he has no such illusions, unlike the right-wing cabal. Kagan openly ridicules the right-wing myth of America as a disinterested "civiliser", calling this "national mythology". He points out that America began by conquest and subjugation, and he then quotes one politician, obviously a right-winger, who said, "The United States never goes to war because we want to. We only go to war because we have to." Kagan scoffs at that: "This self-perception ... bears no relation to reality. Since the late 19th century when the United States became a world power, Americans have used force dozens of times and rarely because they had no choice."

As for going abroad to merely "spread democracy", this Romney adviser laughs at that too. (It's a good thing few Republicans are likely to read even this small book!) Says Kagan: "They (the Americans) have often ignored the dictators in their midst, allied with them, aided them and done business with them. They are not missionaries." He goes on: "Nor when the United States did support democracy was it purely out of fealty to principle. Often it was for strategic reasons ... . In only a few cases ... did the United States seek a change of regime primarily out of devotion to democratic principles." It was pressure from below which caused America to turn its back on some of its dictators. In fighting communism in the Cold War, Americans supported all kinds of despots and tyrants.

Kagan even admits that American foreign policy has been wary of a rules-based system. "Although Americans claim otherwise, and although they are among the most legalistic people in the world, the (international) order they have sustained has never been strictly based on law, but rather on Americans' perception of their interests and on their judgements about right and wrong."

Kagan, throughout the book, makes statements usually made by us progressives and anti-imperialists. But this is the genius of a finely tuned mind: It grasps the best points of the opponents, makes allowance for them, and still devastatingly pursues its thesis.

Yes, America has been big and bad. But it has supported our liberal political and economic order. It has - at least conceptually - shown regard for its European Enlightenment heritage and it has eschewed totalitarian ideologies. (Mark you, its practice has not always been in step with its ideology.) Leftists reading this will recite me a whole list of atrocities the Americans have committed and all kinds of inconsistencies between their preaching and their practice. Don't waste your time writing. I am well aware of them and have enumerated them in these pages.

The fact is that bourgeois democracy which respects free speech, free press, freedom of assembly, individual liberty, civil rights, etc. - however, violated in practice - is superior to authoritarian ideology which suppresses individual liberty, rejects press freedom, controls Internet access and which subjugates the rights of the individual to the State. American democratic ideals are far superior to Islamism, jihadism, various theocracies (including Christian) and to Marxist authoritarian rule as is practised in China.

A world in which America does not have the military might to facilitate Europe's continued espousal of liberal internationalism and a growing responsibility to protect philosophy is a dangerous world - a world inhospitable to democracy and human rights. Even Professor John Ikenberry, who is optimistic about our liberal international order continuing after America's projected decline, admits in his book: "But this movement toward post-Westphalian norms of sovereignty leaves unanswered the question of which states ... would acquire the rights and authority to decide where and how to act. Who is to speak for the international community on questions of responsibility to protect?"

Left to China, Gaddafi would still be in power. China has used its position on the Security Council to frustrate attempts to deal with dictatorships in Sudan, Somalia, Myanmar, Zimbabwe, North Korea, Yemen, Congo and Iran. Only increased pressure by the United States, backed by Europe, has caused China to relent on some matters. If America is weakened militarily and economically, who will pressure states when the masses revolt or need assistance to throw off the yoke of oppression? Yes, we know the US has its own interests. But those happen to coincide more often with oppressed peoples than would China's.
Ian Boyne, a veteran journalist, is the 2010-11 winner of the Morris Cargill Award for Opinion Journalism. Email feedback to columns@gleanerjm.com and ianboyne1@yahoo.com.