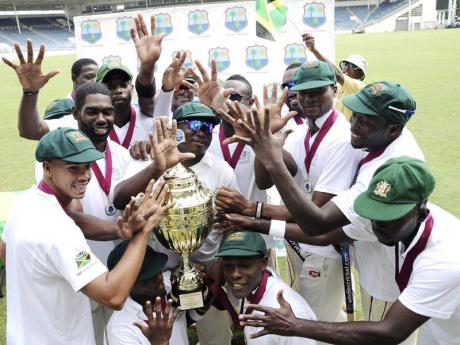 Members of Jamaica's cricket team, with captain Tamar Lambert standing in the centre of his charges, show five fingers to depict their historic fifth-straight claim on the West Indies Cricket Board Regional Four-Day Tournament title. This following Jamaica's 139-run victory over Barbados on the fourth and final day's play at Sabina Park on Monday. 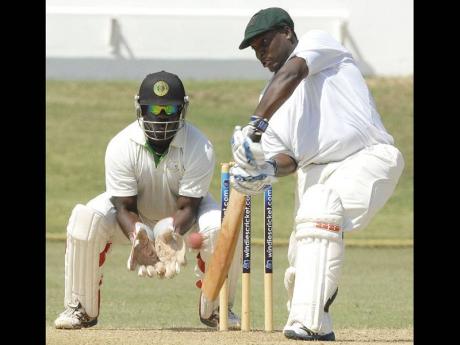 Jamaica's captain Tamar Lambert bats on the way to scoring a half-century during the first day of the West Indies Cricket Board Four-Day Tournament semi-final against Guyana at Sabina Park last month. - File photos 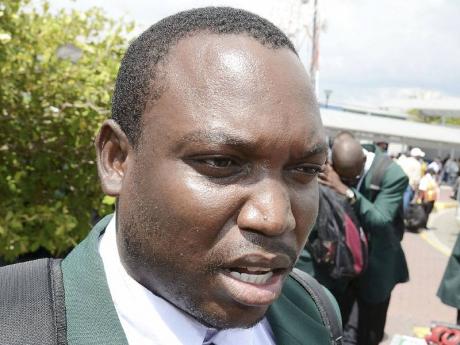 Jamaica's senior men's cricket team created history on Monday by becoming the first team to win five consecutive outright West Indies Cricket Board Regional Four-Day Tournaments when they came from behind to register an impressive 139-run victory over Barbados.

The historic feat was built around the astute leadership of captain Tamar Lambert who has led the team in all five championship-winning seasons. The 30-year-old Lambert refused to take all the accolades for himself, but instead attributed the team's success to the chemistry within the squad.

"It is a good feeling, we have worked hard for this over a number of years and we know what we want as a team, and we will just continue to put in the hard work and continue to enjoy each other's company," Lambert told The Gleaner. "We always want to do well when we cross the rope and represent that badge, and overall, I think it was an excellent performance by our team and we will continue to perform to the best of our ability," he added.

Lambert started out playing cricket at Spanish Town Primary and has been captaining since then. He captained Jonathan Grant High to Under-14 and Under-16 titles, but lost three Sunlight Cup finals to Kingston College.

He progressed through the ranks at the youth level - Under-15, Under-19 and Under-23 camps. It was during this time he started to play cricket with most of the members of the current senior team. He graduated to the senior team in 2004 and won his first of six four-day championships as a captain in 2005. Lambert has also lifted two Super-50 trophies (2007 and 2011) and two play-off shields.

"I have been captain all my life, so whatever team I play on, I normally captain it," Lambert disclosed. "People just see the natural leadership skills in me and I am a student of the game, so they always think that I am the best person to lead, so I just continue."

Despite being the most successful captain in the region in the last decade and the West Indies struggling to find a consistent leader and to get good results, Lambert, who is a consistent middle-order batsman with a first-class average of 31.24, has never featured at the Test level.

It has been speculated that the stocky player has not been chosen for West Indies duty because of his fitness level, but Lambert does not believe he has a fitness issue.

"A lot of persons have represented the West Indies before with the same problem and don't think it is a problem; that doesn't hamper them to go out and perform," Lambert argued. "Nobody has ever come to me and said anything to me - no West Indies selector - or come to the fitness trainer, David Bernard Sr, and asked questions," he added.