Life after the Budget 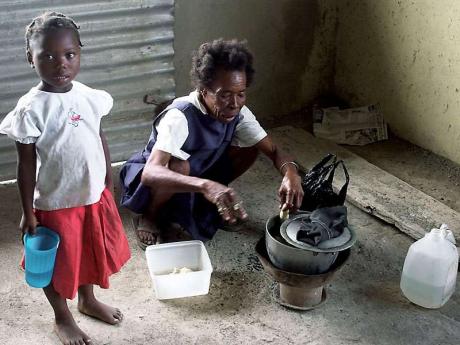 In this 2004 photograph, a poor woman and child struggle to prepare a meal in Rocky Point, Clarendon. The poor need advice on household budgeting, says Michael Witter. - File

Michael Willter, Guest ColumnistAccording to the 'theory of death', life goes on regardless. I think immediately of the unbroken rhythm of life on the Mona campus despite the departure of the celebrated professors Nettleford, Chevannes and Brown in quick succession.

Most students today probably barely recognise those names; few of those can tell you the bases of their fame; and too many of the academic staff are no more aware than the students they teach. Campus life goes on regardless.

Life in Jamaica will go on after the Budget is passed, whenever that happens. In which case, it seems pointless to hold our breaths, to suspend our lives, and to hope and pray for a Budget that will stimulate the economy while the Government gets bogged down in negotiations with the International Monetary Fund (IMF). Instead, we need to think about how we will identify and tap into economic opportunities, whatever the shape of the Budget.

The context of the 2012-13 Budget is inauspicious. Jamaica has a new government that has inherited a fiscal meltdown in an economy that shows the merest of signs of recovery from the great global financial crisis of 2009. The IMF agreement unravelled in 2011 over several issues, one of which was the failure of the last government to reform the tax system along the agreed lines.

The new government has to implement tax reform that is acceptable to the IMF and the business community, while trying to protect the working people, especially the poor and vulnerable, from bearing too much more of the relative burden of the tax system. Expenditure limits will be so tight, that without radical reorganisation of government processes, some jobs and services provided by the Government will be threatened.

Certainly, the world is not pausing for the Government to negotiate an agreement with the IMF and present an agreeable Budget to Parliament. Climate change is gathering momentum that will impact harshly on islands like Jamaica. The global economy is becoming more competitive by the day, as countries try to at least maintain their share of the global markets, and possibly increase them.

Sabre-rattling in the Middle East will continue to accelerate increases in the cost of petroleum-based energy. Food prices will probably continue the upward trend of recent years as some output is diverted to the biofuels market, petroleum-based farming inputs become more expensive, and natural hazards and climate change impact agricultural yields negatively.

In July, the world's leaders will meet in Rio to reaffirm the commitments their countries made to sustainable development 20 years earlier at the famous Earth Summit. Our Government has to find a way to stay Jamaica's sustainable development course in the midst of the inevitable austerity of the 2012-13 Budget, so that our renewed commitments are credible to the international community.

The Government must continue to pursue inclusive economic growth, combat poverty and protect the vulnerable, protect the environment from abusive and unfriendly consumption and production processes, and pursue strategies to adapt and build resilience to the principal manifestations of the changing climate.

It seems obvious that the political directorate should be huddling regularly with the business community to set some targets for production, employment, income and foreign-exchange earnings, to focus investments and maximise the use of existing production capacity.

More assiduously than ever, the political directorate must work with the civil service to remove unnecessary and costly obstacles to productive activity. Bit by bit, the colonial bureaucracy, which was designed and nurtured over more than three centuries to extract wealth from the colony instead of stimulating the creativity of the colonised citizens, must be transformed into an agent of development that is flexible in administration, responsive to creative initiatives, and strategic in its approach to policy. This transformation will be a long process, but the austerity programme must be seen as an opportunity to build the capacity of the State to support the aspirations of Jamaicans and their expectations of Independence.

As used here, the business community should be interpreted in the broadest sense, from the multinational, through the national conglomerate, to the medium, small and micro enterprises, and ultimately the sole operator, like the artisan and the farmer. Accordingly, the Government will have to adopt an appropriately differentiated approach in engaging each group. Each will require continuous monitoring and support to meet the mutually agreed targets.

Organised labour must now pull together the elements of the new strategies it has been fashioning in recent years to cope with internationally and instantaneously mobile capital, rapid technological change, and the ravaging of standards of living by the free play of market forces, all with dwindling protection and support from the State.

Job creation must be
raised to equal status with job protection. This will require engaging
the employers and the Government on the technical ways of enhancing
productivity in the workplace that tap into the experiences of workers
and their knowledge of the nuances of the production processes. Central
to this must be a strategic commitment to upgrading the technical
knowledge and skills of the workforce. Some of this had begun under the
first and second MOUs a few years ago. The economy will benefit from an
early return to this process, but expanded to embrace the business
community integrally. This idea has been often discussed as a social
compact.

None of the above has to await the passage of
the Budget. To be sure, the share of the Budget allocated to the social
safety net programmes will be a principal determinant in the fight
against poverty. But, it has never been enough to seriously challenge
the hold of poverty over so many households. The poor, more than the
non-poor, need economic opportunities, whether in the form of
employment, access to land, or access to the tools for the skills and
trades that they have.

The poor also need sensitive education on
household budgeting, especially for nutrition, and meaningful guidance
to develop any entrepreneurial initiatives they have. In short, building
human capacity in the poor should be an integral strategy in the fight
against poverty. Here, too, the Government must cultivate its
partnerships with the business community and civil society to transcend
the limits of whatever the Budget holds for the social safety
net.

By definition, actions taken with regard to the
environment have to stretch over many years, and not just the one-year
horizon of a national budget. There are many things the Government can
begin to put in place to support the protection of Jamaica's natural
environment and its biodiversity, and to build a national consciousness
for adaptation to climate change. Some will argue that these are even
more urgent than the Budget despite the difference in time
horizons.

Regardless of the structure of the Budget
and the shape of the IMF agreement that is expected to frame it, the
Government of Jamaica must mobilise resources from the public sector,
the business community, and civil society to address the environmental
challenges.

These three pillars of sustainable
development - inclusive economic growth, poverty eradication, and
environmental protection - have to be strengthened, whatever the Budget
turns out to be. More than that, Jamaica must create its own
characteristic synergy of the three pillars through 'green' economic
activities that respect the natural environment, are internationally
competitive, and generate income levels that lift the working people
they employ above the poverty line.

Jamaica can
produce high-quality organic foods and products derived from them for
high-income export markets. By extension, this strategy includes the
production of medicinal products from plants, and the development of
nutraceutical products.

Sustainable tourism is the
only survival strategy for that industry in the face of rising sea
levels, warmer temperatures on sea and land, shifting rainfall patterns
with more extreme droughts and floods, and more intense hurricanes. The
tourism industry must reduce its energy footprint and begin the
relocation of accommodation and other facilities from the vulnerable
coasts to higher ground. For example, pedal-driven rickshaws and boats
powered by sails and oars must begin to replace gasolene-powered
vehicles, boats and other marine recreational vehicles in the resort
areas.

Cultural goods and services that channel the
creativity of our people come readily to mind as industries in the new
green economy. In addition to developing music, film and sport, Jamaica
should offer 'offshore' education and health services to North America
and the affluent communities in Central and South America. The Internet
facilitates telecommuting over a wide range of ICT activities, and
Jamaica's move upstream to higher value-added services, without
abandoning call centres, is now long overdue.

At best,
the 2012-13 Budget should be funding the first year of the sustainable
development strategies, some of which have already been identified, to
transform the Jamaican society and economy to the 'place of choice to
live, work, raise families and do business' over the next 18 years. But
even if it just squeezes out more from the incomes of those who are
least able to afford it, to repay the debt and to maintain the
bureaucracy, it will still be imperative for the Government and its
partners to aggressively pursue the sustainable development strategies
of the Vision 2030 process.

As important as the Budget
is to guide governance for the next year, there is life after and
beyond the Budget, and it must be
lived.