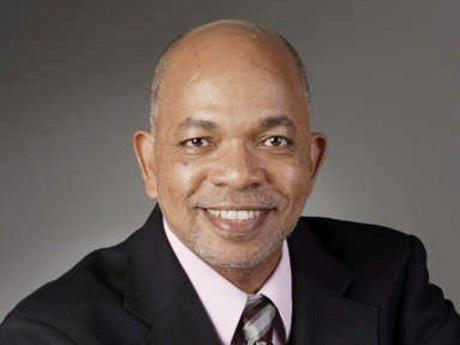 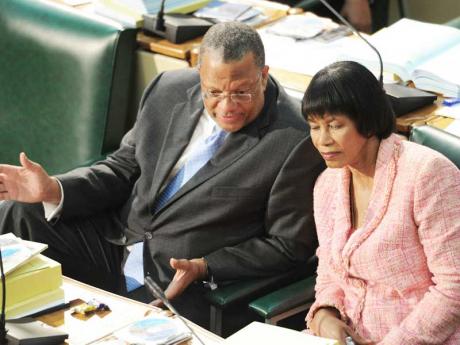 Finance Minister Peter Phillips has the ear of Prime Minister Portia Simpson Miller as he prepares to table the Budget for the 2012-13 fiscal year last Thursday.- Ricardo Makyn/Staff Photographer
1
2

This past Thursday, Finance Minister Dr Peter Phillips presented the 2012-13 Estimates of Expenditure, representing a six per cent jump over last year, with increases on both recurrent and capital. The main signals are in keeping with his promise to: protect public-sector jobs while making it easier to do business; tackle the high debt and high energy costs; and implement tax reform.

The sharp increase in the Programme of Advancement Through Health and Education social-protection programme appears to buffer the deep sacrifices Dr Phillips has warned us to expect. This, however, may not be enough to offset the real cuts in education, national security, and health to achieve Prime Minister Portia Simpson Miller's promise to balance people's lives.

Missing are the details that reflect Dr Phillips' assertion that he is going for growth, but that should be revealed once the Budget Debate opens later this month. The decision to go for growth, while warning us to expect deep sacrifices, is in line with the recent suggestions by the managing director of the International Monetary Fund (IMF), Christine Lagarde, that austerity and growth are not mutually exclusive. Although still early days, it is so far so good for the Jamaica College old boy. The next phase of the Budget process needs to reveal even bolder strategies if we are to achieve growth, balance lives, and contain the debt.

Budget needs to be aligned with Vision and Strategy

A budget is really the quantification of a strategy to achieve a vision. Jamaica's annual budgeting processes over the years have been no more than grand accounting exercises, with only passing references to Vision 2030, and no clearly articulated strategy. Little surprise, therefore, that we have perennially failed to achieve targeted macroeconomic performance.

Rather than diagnosing reasons for the missed targets and putting appropriate corrective actions in place, successive finance ministers and their parliamentary colleagues have appeared unperturbed, and have moved merrily along to set new targets for the following year. While fiscal and primary surpluses can be manipulated by throttling spending, growth cannot, and should therefore be considered the ultimate performance indicator for the budgeting process.

Based on finance ministry-published budget memoranda, former Finance Ministers Dr Omar Davies and Audley Shaw projected accumulative GDP growth of 35 per cent during the 13-year period 1997-98 to 2009-10, yet only delivered seven per cent. Dr Phillips needs to reverse this poor performance by taking the Budget process beyond the simple accounting approach; aligning it to strategies to achieve Vision 2030; then continually execute during the year to ensure that macroeconomic targets are achieved.

Strategy is about choice and prioritising. It is because resources are limited why strategic thinking is required to determine the best options to achieve desired results and to align the limited resources to such options. To achieve growth, balance lives and contain the debt, Dr Phillips and his parliamentary colleagues need to take some tough decisions. Areas of expenditure once considered safe must be scrutinised and adjusted if deemed necessary, not dissimilar to the zero-based budgeting approach advocated by former Cabinet minister Don Wehby.

One such tough decision required is the reallocation of the reduced education budget, as the chart below shows that per-capita spending on early childhood is dwarfed by other areas. In line with his strategy to focus on early childhood, Education Minister Ronald Thwaites must take the tough decision to shift the necessary resources from primary, secondary, tertiary or special education.

Contrary to popular sentiments, implementing major infrastructural projects is necessary, but not sufficient to drive growth. As nothing is in short supply, growth can only be achieved by increasing demand for our goods and services, while ensuring that supply will respond to that increased demand. Increased demand is driven by increased local consumption; increased tourist consumption or increased consumption by the rest of the world. Increased supply can be achieved from underutilised, existing or new capacity.

A careful analysis of the relative contribution from each source of increased demand and increased supply must be done, the appropriate policies or strategies implemented, and resources prioritised through the Budget. For example, if we decide that demand has to be stimulated mainly via exports, we must challenge the majority of stimulus funds to, say, JAMPRO and EXIM Bank.

If, on the other hand, demand can be stimulated mainly by import substitution through increased productivity, we should channel the majority of stimulus funds through the Jamaica Productivity Centre. Stimulus funds/fiscal incentives ought not to go directly to private producers of goods and services; rather, they must significantly improve their productivity, product mix and customer value proposition, with relevant support from key state agencies.

To stimulate the economy while balancing lives and containing the Budget deficit, Dr Phillips needs to make some bold moves by targeting a few big-ticket items that can deliver some $31 billion. These include implementing tax reform ($7b), implementing the Public Sector Transformation Unit (PSTU) reform recommendations ($12b), and relieving the National Housing Trust (NHT) of its three per cent non-refundable employers' contribution ($12b) by putting it to more productive use.

The PSTU commissioned PwC to quantify savings from its recommendations. PwC reported that $25 billion could be saved in the first two years, meaning that as successive administrations fiddled, approximately $35 million a day of potential savings goes down the drain. Implementing the PSTU report would be contrary to Dr Phillips' intentions and would result in serious dislocations and job losses, but tough times require bold decisions.

The NHT pulls in some $20 billion from taxpayers each year. After 37 years in existence, the NHT is more than adequately capitalised and should be allowed to take in only the two per cent employee contribution. The Trust's healthy balance sheet will allow it to seek creative means to finance housing solutions. While the NHT has achieved much over the years, its performance has fallen far short of potential, given its vast resources.

At a time when Dr Phillips is speaking about making deep sacrifices, it is difficult to reconcile the NHT's managing director's $28-million mortgage on very concessionary terms, while contributors are limited to a paltry $4.5 million. The annual value of the MD's mortgage concession approximates what the Government of Jamaica spends on some 100 early-childhood students each year.

The Government and the country are in difficult times. Dr Phillips has taken a few bold steps. However, much tougher decisions are needed as he demonstrates that although sacrifices must be made, such sacrifices are investments in a brighter future for all.