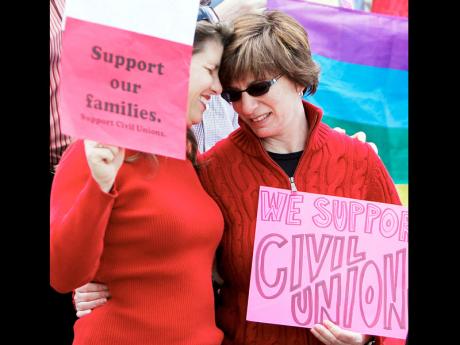 In this May 8 photo, partners Anna Simon (left) and Fran Simon embrace at a rally in support of civil unions at the Capitol in Denver.

Jamaicans have an enviable record worldwide as being very loving people. However, this lovingness comes with some distinctions.

Intolerance is replete across Jamaica and, regrettably, is seemingly a way of being. For far too long Jamaicans have ignored, encouraged and institutionalised discrimination against people without realising that the country could be enriched if they reach out to all citizens, enshrine the dignity of them all, and respect/celebrate the diversity among them.

This year, Jamaica's 50th anniversary of Independence, is the perfect opportunity to be on the right side of history in addressing the issue of human rights for all, for a stronger Jamaica, nationally and internationally.

The laws of Jamaica have, for too long now, singled out for punishment one group of people on the basis of their sexual orientation alone. These laws have been used to justify the arbitrary arrest, detention and even torture of individuals who are suspected of being lesbian, gay, bisexual or transgender (LGBT).

They also send a message to the entire population that discrimination, harassment and violence against people who are, or who are perceived to be, 'different', is okay. As a result, lesbian, gay, bisexual and transgender persons face disproportionately high levels of discrimination when accessing health care, housing, employment and other services.

The perpetrators of the vast majority of these crimes are allowed to walk free with little or no investigation occurring when these incidents are reported to the police.

The root of the justification for continued discrimination is that human rights do not apply to sexual orientation, and that the rights of LGBT individuals are fringe, special interest, or 'Western' rights, not compatible with Jamaican religious and cultural values.

Understandably, people are entitled to their own religious, cultural and moral beliefs. However, these beliefs cannot be used as a justification for differential treatment, for intolerance, violence or the criminalisation of intimacy between adults based on whom they love.

HUMAN RIGHTS FOR ALL

Just days after the world celebrated International Day against Homophobia, J-FLAG and Amnesty International encourage Jamaicans to help in protecting and respecting human rights of all its fellow Jamaicans, regardless of sexual orientation and gender identity.

Prime Minister Portia Simpson Miller's condemnation of discrimination based on sexual orientation in December 2011 has heartened many Jamaicans. Additionally, people around the world who are outraged by the situation of discrimination, violence and disdain faced by lesbian, gay, bisexual and transgender people in Jamaica have welcomed her stance on the issue.

Now is the time to ensure all Jamaican citizens are effectively protected from violence, harassment and persecution. Everyone should ensure that their political representatives understand the critical need for Jamaicans to live in a safe, cohesive and just society.

However, for this to translate into concrete legislative and policy measures, Jamaicans have to support human-rights organisations in ensuring that distinctions in the Constitution are amended and removed.