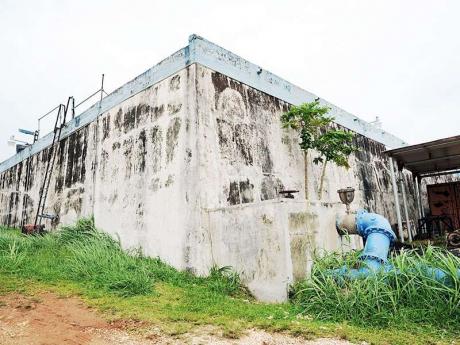 Asbestos cement pipes lead to and from this NWC tank in Manchester. - Ian Allen/Photographer 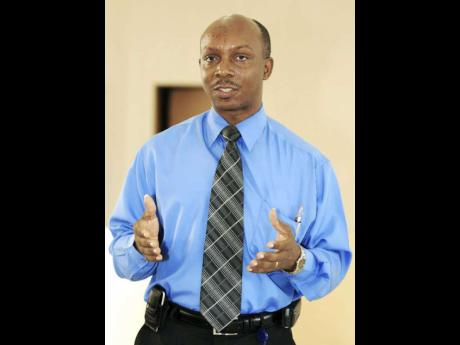 More than three decades after the National Water Commission (NWC) ended its use of pipes made from asbestos cement to distribute drinking water the company has admitted that these are still in its distribution system. But like it did 30 years ago, the NWC is still adamant that there is no need to panic.

The NWC, in the 1980s suspended the use of asbestos cement pipes in the greater Mandeville water supply scheme and told the country then there was no need for alarm.

In 2012, Charles Buchanan its manager for corporate relations has maintained the company's position.

"It is indeed a sensitive issue and one about which there is much public anxiety.

"But the NWC had indicated publicly, a number of times over the years, there are indeed some of our system, both water and waste water systems which have had asbestos cement pipes or more specifically, chrysotile cement pipes in sections of the network," Buchanan told The Sunday Gleaner last week.

The issue returned to front burner recently after two groups of fire personnel were moved to other locations after asbestos fibres were discovered in the roofs of the buildings they occupied.

"It's a comparatively small section of our network, but it is in a number of different places across the country. What the evidence has indicated - and this has been confirmed by the World Health Organization (WHO), the Pan American Health Organization (PAHO) and numerous independent research and medical studies - is that there is no threat posed to the public's health from the use of asbestos cement pipes in the conveyance of either water or wastewater," stated Buchanan.

Backed by data from the WHO, Buchanan said, "as used in the water commission, there is little or no threat to anyone."

In April 1988, then minister of public utilities and transport, Pearnel Charles - at the annual general meeting of the Manchester parish investment committee - criticised the decision to suspend the use of the asbestos pipes in the $50M greater Mandeville water supply scheme.

Charles was supported by then NWC chair Cecil Charlton, who said numerous tests had shown conclusively that only the asbestos fibres and dust from it proved harmful.

In the last three decades discussion and debate on the issue has sea-sawed locally, while some countries have moved to cease the usage of asbestos cement pipes.

Buchanan said the NWC,'s policy is not to use any asbestos related material for new ventures.

"In all instances in which we are repairing or replacing pipes, we would remove those sections and replace them with other types of materials," he stated.

According to Buchanan, the policy shift was not because of medical scares, but "more of a moral hazard," and a move to quell "public anxieties about the issue".

The NWC storage tank at Kingsland in Manchester, constructed in the early 1980s was the last to use asbestos pipes in the distribution of water to Mandeville.

"Even though there is no risk involved in the use of the product, or very negligible risks, it was not a very strong moral position to be using a product which may have involved some level of risk for the persons mining and manufacturing the mineral," said Buchanan

The WHO estimates that about 125 million people are exposed to asbestos at the workplace, and it is estimated that about 107,000 people die each year from asbestos-related lung cancer, mesothelioma and asbestosis resulting from occupational exposure.

Strong, durable and economical is how the National Water Commission (NWC) has described the asbestos cement pipes it has in its water distribution system across the island.

The commission, through corporate executive for public relations Charles Buchanan said the lifespan of the asbestos pipes is almost 70 years.

"Most of the other pipes will give you 35 to 50 years, and only some other types of piping material will come close to the 70 years the asbestos cement pipe provides.

"Asbestos cement pipes are, by far, the most economical pipes to use. It has advantages in terms of lifespan and durability, and even issues such as the cost of electricity as used, both in its manufacture as well as in the conveyance of water along these pipes, because of the internal smoothness of the pipes," said Buchanan.