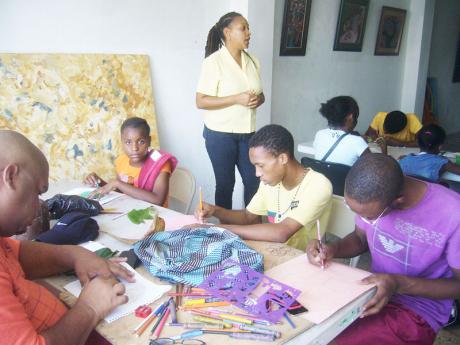 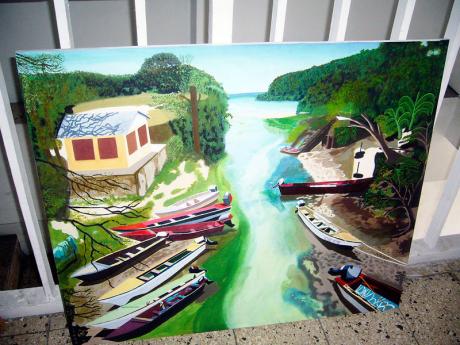 This seaside scene was done by Charles Stewart, one of the participants in the youth programme at Studio 174, downtown Kingston. 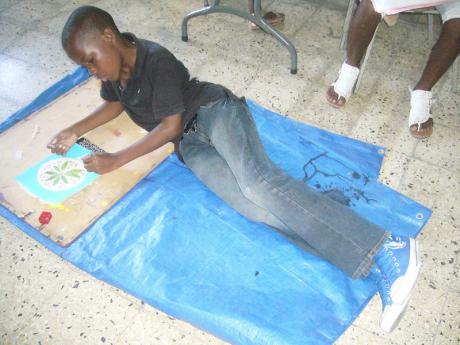 Trishawn Dennis did not let the unavailability of a chair prevent him from delving into a world of creativity at Studio 174, downtown Kingston, recently. 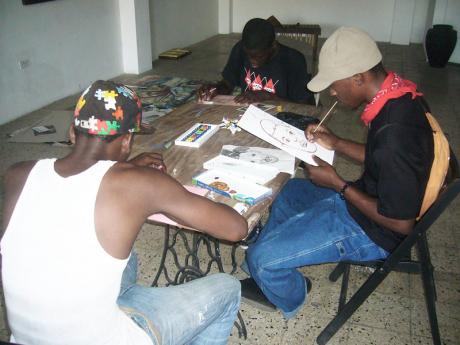 Off the streets and in Studio 174 these inner-city youth find themselves creating works of art.
1
2
3
4

Early Saturday afternoon, on May 12, and some inner-city children and youth were quite busy, lost in their world of imagination and creativity, in an oasis in the city of Kingston. They are from Kingston's tough neighbourhoods, and they are expressing themselves through art in Rozi Chung's Studio 174, located at Harbour Street.

Chung, an artist herself, said Studio 174 is offering a space where they express themselves freely without domestic challenges and competition. "It's also to get them to know a little bit of how they think, to help them to retain their unique way of thinking, to let them know that it's OK to be different in their thoughts, They would know how to get along with one another even if they are thinking differently. The goal is to practise emotional intelligence with challenges that they will face on an every-day basis," the art educator said.

It's not art for art's sake, it must have some sort of personal impact on them. They must get an understanding of what they are doing and what is going on in their heads. Unity, diversity and acceptance, despite differences, are encouraged among the participants, who are exposed to different art forms including murals. Incidentally, Studio 174 has painted a section of the enclosure of Digicel's new headquarters, which is under construction. Studio 174 has done two additional murals in Tivoli Gardens. It's about using art to beautify the community.

One of the thrusts of Studio 174 is art therapy through its Inscape Foundation, of which Chung is one of the founding members. Art therapy is a concept in which the work of the artist is analysed to detect any emotional or psychological problem that he might be having. "We are not escaping, we are going within to find our problems. We are gonna confront our situation, with art," declared Chung, who has been using art therapy for over 10 years.

Analyses are also done through drama, music and dance. Image/photography therapy is used to discuss some of the challenges participants are facing. There is also a clinical psychologist who visits to assess and work with children who might have expressed trauma through their art.

Inscape was invited into Tivoli Gardens after the May 2010 incursion to deal with 10 young person who were jailed subsequent to the upheaval. They were given cameras to record their own stories of what happened. According to Chung, the project went well, and Inscape was asked to return. Out of the participants' work emerged an exhibition that also went to New York.

The programme for the inner-city participants is a non-profit effort to offer an outlet for artistic expression. And like all well-intentioned programmes started by an individual or a group to alleviate social and community challenges, Studio 174, which is a gallery to showcase artists' work, is in need of funding for its outreach programmes. Most of it comes from Chung's own pockets and those of a few committed friends for the last six years.

There is a need for art supplies, desks and chairs, fans, cameras, computers, and workshops to show different types of methods. And, there is even a desire to take participants out of the 'concrete jungle', even for a day, to the mountains, the countryside, an unfamiliar environment to see life from a different angle and to be influenced by images other than those of the inner city. This will require transportation, snacks and refreshments.

During the chat with Chung, one of the committed friends, Carlene Aldred, appeared. Chung said Aldred has been by her side from day one, and has donated a fan. Alred said she maintains her association with Studio 174 "because I like art and I enjoy doing it", and Chung is a "great teacher". She finds the participants to be quite artistic, and said art would teach them patience and tolerance.