Use the brain that God gave you 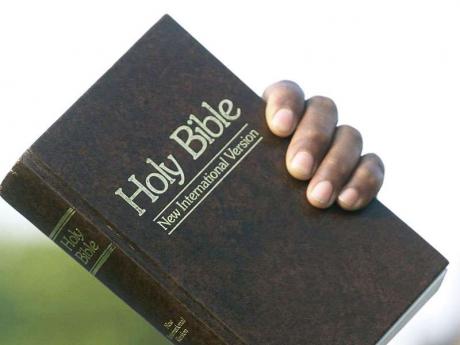 On Sunday, April 15, a column ('Follow Jesus' map') I'd submitted for Easter Sunday was finally published by the Conservative Old Lady of North Street (COLONS).

It was intended to be a controversial but thought-provoking analysis of Christ's message. I considered it the most important column I've written to date and told ye olde editor so. Despite my self-serving assessment, he obviously disagreed because COLONS hid it. Online readers, who were given no specific link but needed a thorough website search to locate it, wouldn't have known to look for it in the nether regions of that day's In Focus where it had been tucked away. No doubt, had I written about local politics or scoured some temporarily famous Jamaican public official, the column would have gained maximum exposure.

So, I took several deep breaths, accepted the column's fate, which was to be widely unread, decided to forgive ye olde editor and COLONS (who knew not what they had done) and move on. Well, not for the first or last time, I wuz wrong! Apparently, one Rico Kaplan saw it (I hesitate to allege that he read it); failed to understand what it was about; yet felt moved to write a substantial number of words with the intent to disparage it. His non-responsive response was published on Tuesday, April 24, beside my usual light-hearted Tuesday column, no doubt as a marketing tool to try to boost sales through conflict, although the one had nothing whatsoever to do with the other.

Ah, the trials and tribulations of oppressed columnists without the means or inclination to own newspapers. Thank God for the Internet where we can blog to our heart's content without the threat of editorial interference or creative juxtapositioning.

The reason for the reply

I've provided this painstaking (some will say painful) background so readers can appreciate why I'm breaking what is almost an inflexible rule on my part by replying to Rico Kaplan. Normally, I don't respond to critics who are entitled to their point of view. I find that replies usually add little to the conversation as both columnist and critic have set out their positions and any further on the subject tends to be mere regurgitation ('You're wrong!'; 'No, YOU'RE wrong!'; 'No, YOU'RE wrong!' ad nauseam).

But this subject is too important. It's time that we, as humans being, (and I refer to ALL of us, not just Jamaicans) learn to accept new concepts of our spiritual origins and destinations for what they are - thoughts from within that should be seriously considered and not automatically rejected as alleged attacks on 'Christianity' or (horror of horrors!) 'the Bible'. Such acceptance is the sine qua non for world peace, and world peace is the sine qua non of earth's continued existence as we know it.

And, in rejecting new concepts of spirituality, I prefer persons use the brains God gave them and think these concepts through rather than to rely on dogma to reject them without argument of any kind, as Rico Kaplan has done. For example, his most telling point was: "Mr Robinson uses a Bible he does not believe in to poke apparent holes in a Christianity he has no clue about.

"I am always amazed at all these would-be theologians who have just read a passage or two in the Bible and suddenly understand 'theology'. Don't do that. It's embarrassing."

What's even more embarrassing is would-be Christians who make assertions like this but fail to follow them up with a single Bible passage to establish the truth of their assertion. It's impossible, in a Gleaner column ruled by word count (almost as passionately as church members are ruled by Old Testament dogma) to quote more than "a passage or two in the Bible". It would've been more helpful had Rico put down his/her trombone and proved, from the Bible or elsewhere, how it was that the quotes used by me were wrong or misleading.

What is there in my original column to suggest that I don't believe in the Bible? Like all other students of history, I know that the book we call the Bible is not all there is. The collection of articles we know as the Bible itself excludes much of what was written as Gospel at the time. The Gospels included were written more than 30 years after Jesus' death by persons (using pseudonyms) who never met Jesus. They include several minor and major internal contradictions. But, insofar as the New Testament attempts to pass on the teachings of Jesus, it's very credible and consistent and I very much believe it. I also accept Jesus as my and your Saviour.

Jesus not the only son

I disagree with the Church on how He went about trying to save us. I believe He was a Son of God. I disagree that he was God's only son. I believe in the Resurrection. I am a Christian, regardless of what Rico may think and regardless of how much I detest what has been and continues to be perpetrated against fellow humans by the Church in the name of Christianity.

I have every respect for the New Testament (warts and all). I have none for the Old Testament. I don't accept that "I am the Way, the Truth, the Life. No one comes to the Father except through Me" means only members of the Christian Church are saved. To believe that means millions of persons who lived before Jesus and millions who, through no personal fault, haven't heard of Him, are doomed to eternal damnation. That is logical nonsense which can only be believed by intellectual robots who've discarded their free will and minds given to them by God.

So, what it is that amazes me isn't so much "would-be theologians who have just read a passage or two in the Bible and suddenly understand 'theology' ..." as would-be Christians who have read nothing else but the Bible and who accept what is printed in those pages (by God knows who) as absolute dogma that can't be analysed by anybody but a Christian pastor.

Well, bully for them. I've read the Bible. In my search for spiritual truth, I've also read many books by Christian and non-Christian scholars who've tried to explore the realm of spiritual truth. I've put it all together and formed my own view of my spiritual truth which I've tried to pass on to readers as best as such a complex topic can be accomplished with a word restriction. This may offend lovers of biblical dogma. Life's like that. My truth needn't be your truth.

Back to Rico, who wrote: "Who made Mr Robinson God and why in the world should we believe him? He states that belief in the Trinity causes/forces people to tithe. I'd like to know where in the world he finds support for that assertion." Answer: Nobody. Nobody said GR was God. What I wrote was I believed Jesus when he said that He was not God; that God dwelled within Him and He within God; that God was our (all of us) Heavenly Father; and that the works Jesus did, if only we believed, we could also do. I took Jesus to be preaching an egalitarian gospel which differentiated Him from us only in purpose in that His was to show us the way and not to set Himself up as God or otherwise superior to the rest of us.

This analysis wouldn't be popular with the Church who MUST have control over our lives or perish. I didn't write "belief in the Trinity causes/forces people to tithe". What I wrote was the Holy Trinity is a creation of the Church for which there is no scriptural basis. I would've appreciated Rico proving me wrong by simply pointing out the scriptural basis for the Trinity.

I wrote that, in my opinion, the Church's motive for creating this "duppy story" was to keep us in attendance and tithing. Goodman's Law: "Don't ask if it's about the money. It's always about the money." I wrote: "The Church's plot requires belief in a Holy Trinity, belief we must surrender to Jesus, not to the Spirit within. This keeps us in church tithing 10 per cent of earnings."

It's not belief in the Trinity alone that bears a direct link to tithing. It's the Church's need for a captive audience that led to the mythical need to surrender to a dead man (accomplished with the help of the creation of the Holy Trinity). Belief in those myths keeps us in Church listening to Pastor. Pastor insists we tithe.

Rico then ends with an evangelical-style rallying cry: "Is there evidence for the historical Jesus? Categorically, yes. Are all Christians just foolish people who have a wishful thought for a better life so they believe in stories akin to the existence of the tooth fairy? Of course not." But nobody asserts the "historical Jesus" didn't exist. What I've tried to do, based on His life and His word, is to analyse the WHY of His existence and the content of His message.

I once attended a most informative lecture delivered by the celebrated Christian scholar Os Guinness. During a question-and-answer session, he was bombarded with hostile questions about wars, inquisitions and crusades carried out in Christianity's name and the bellicose policies of early popes. His answer was simple and candid, and one I'll never forget. He said: "There's nothing wrong with Christianity. It's Christians we must worry about."

Why was I surprised? Guinness is a product of wide experience, travel and learning, and wasn't forced to read the Bible alone or to ignore alternative spiritual analyses. Born in China as the grandson of a Dublin brewer, he personally witnessed (albeit at age eight) the 1949 climax of the Chinese Revolution. He was educated in London and earned a PhD from Oriel College, Oxford. In the 1960s, he was a leader of L'Abri, an evangelical Christian organisation dedicated to the discussion of alternative religious and philosophical beliefs. When Os Guinness says he's a Christian, he's a Christian who understands many faiths. Dogma never distracts real Christians from investigation, analysis and thought. I commend these heretic concepts to Rico Kaplan.