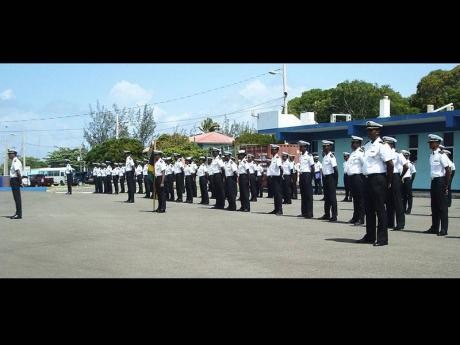 Cadets in formation during the Day of the Seafarer celebrations at the Caribbean Maritime Institute yesterday. - Contributed

Seafarers need to take an active role in helping the international community to win the battle against substandard shipping. That's the message from the Maritime Authority of Jamaica (MAJ) on the International Day of the Seafarer, yesterday (June 25).

As the maritime industry celebrates the contribution of seafarers to the world economy and commerce, the MAJ is urging seafarers to assess the quality of the employers for whom they choose to work and become more involved in ensuring that their own welfare issues are adequately addressed.

"Seafarers have to begin taking some responsibility for the companies they choose to work for," advises Rear Admiral Peter Brady, director general of the MAJ. "Many issues are facing the seafarers today, such as piracy, fatigue and substandard welfare provisions, and, therefore, they should research the companies from whom they are considering offers of employment."

Brady advises seafarers: "Look at the company's track record and decide if this is the type of employer you want to work for. While we understand the need for jobs and the urgency of providing for families, seafarers put their lives at even more risk if they work for substandard and disreputable owners."

The Day of the Seafarer was first celebrated in 2011, following its establishment by a resolution adopted by the Conference of Parties to the International Convention on Standards of Training, Certification and Watchkeeping for Seafarers (STCW), 1978, held in Manila, Philippines, in June 2010, which adopted major revisions to the STCW Convention and Code. Brady, former chairman of the IMO STCW subcommittee, presided over that diplomatic conference in Manila.

The Day of the Seafarer has now been included in the annual list of United Nations observances.